Her Parents Lost Their First Child. Help Srija's Parents Save Her From Cancer! | Milaap
loans added to your basket
Total : 0
Pay Now

You are sending a message to
BHASKAR DAS
Go back

Her Parents Lost Their First Child. Help Srija's Parents Save Her From Cancer!

“After we lost our son, we did not imagine life could go on. But it did. And now, our daughter is sick.I don’t know if we can go through it again"

So says Bhaskar, Srija’s father. Bhaskar is a clerk in Belur Lal Baba College in Kolkata. He lives with his wife, daughter, and parents in a small house in Kolkata. For Bhaskar, his family is everything.
Bhaskar and his wife Soma got married in 2007. They had their first child- a son- in 2009. Unfortunately, the baby passed away 7 days after birth due to a rare disease. Bhaskar and Soma were shattered after the loss. It was only after the birth of their little girl Srija in 2011, that the couple felt she brought joy into their lives.

Srija is 6 years old. She is a cheerful girl, always smiling at her parents. She loves playing games and is very friendly. Srija seemed healthy other than a persistent cough.
In early 2017, Bhaskar took his daughter to a local doctor in Kolkata, who prescribed it as a seasonal cough, and prescribed allergy medications. After a few month of this medicine, Bhaskar took Srija to a bigger hospital in May 2017.

“Before I could tell the doctor about her cough, he stopped me. He told me that he had a feeling why her eyes were so pale”

Dr Ghosh suspected thalassemia after seeing Srija’s pale skin. He asked Bhaskar to get a test conducted, and refused to diagnose anything without the medical report. Srija’s parents panicked and rushed to get her treated.

A diagnosis that shook the family:

After the test, Srija’s haemoglobin count was very low. So were her platelet counts. Bhaskar showed the reports to a doctor friend of his, who urged him to get Srija admitted as soon as possible, as the test ‘did not look correct.’

“All I wanted was to get my baby girl admitted. I thought that the sooner I start the treatment, the sooner she will become OK.”

Srija was admitted in Tata Memorial Hospital, Kolkata in May 2017. She had been diagnosed with Acute Lymphoblastic Leukemia- and required an aggressive treatment of chemotherapy in order to recover. The cost of treatment was estimated at Rs 8 lakhs.

How Can you help?

Bhaskar has worked as a clerk in his college for more than 10 years now. However, he is still a contract worker, and gets no medical benefits. He earns a mere 8500 Rs per month, which goes towards supporting his family.

“In May, when I was running around trying to get my daughter admitted, they would not pay me. I earned Rs 388 that month.”

Bhaskar does not get paid every day that he doesn’t report to work.  He struggles with his daughter admitted in the hospital and going to work. Even with him working everyday, he cannot afford the cost of treatment required to save his daughter.
Bhaskar and his wife have already lost one child. They are desperate not to lose another.
Your contribution can ensure that Baby Srija recovers and lives a long healthy life. Help save Srija!
Donate 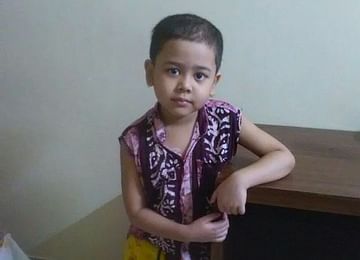 Bhaskar and his wife do not want to lose another child

UPI: givetomlpshrija@yesbankltd (Copy to clipboard)
Click here to read the instructions before you make a bank transfer.