This Mother Who Gave Birth At Home Due To Poverty Now Fears Losing Her Baby | Milaap
loans added to your basket
Total : 0
Pay Now

"We did not have money to deliver the baby at a hospital. It is quite common in our place to give birth at home. My neighbors were with me and I delivered our baby boy without any complications. However, within 3 days of his birth he was admitted to the NICU. It's been almost a month and he is still on ventilator support. The doctors say he has severe infections, I feel extremely guilty. I feel like my ignorance has caused this." - Shivani, Mother.

Sandeep and Shivani were on cloud nine when she became pregnant. However, they could not afford to plan for regular check-ups and scans. While affording meals itself is a struggle, paying for hospitals was beyond their means. Shivani made sure to take ample rest. Shivani did not have any complications in her pregnancy but her baby vomited whenever he drank milk and when he began to have breathing troubles, they took him to a local hospital in their hometown Mathura.


"The doctor asked us to take him to a hospital in Jaipur immediately. We took him in an ambulance. The doctors asked us why we took the risk of home birth despite all the awareness. We don't even have TV at home, we are not educated. We never thought it would affect the baby." - Shivani.

Their baby has been on ventilator support for nearly a month

Baby of Shivani is diagnosed with Sepsis Septic shock, it is a life-threatening organ dysfunction caused by a response to infection. In septic shock, there is acute failure of multiple organs, including the lungs, kidneys, and liver. The baby is also bleeding from his lungs. He has been on ventilator support for almost a month.

After mortgaging their home and shop they got only 1.5 lakhs

Sandeep has a small shop in his town, he sells toffees and pan masala. He earns around Rs 200 per day. He hardly has any savings. When the doctors asked them to take his baby to Bangalore, he immediately mortgaged his house and shop and managed to get 1.5 lakh. Now he has run out of money. He needs 3 lakh more for the treatment and he is helpless.

Shivani's baby is hardly a month old, his parents can't even hold him in their arms. He is battling deadly infections that can turn fatal without treatment. He needs your help to survive. 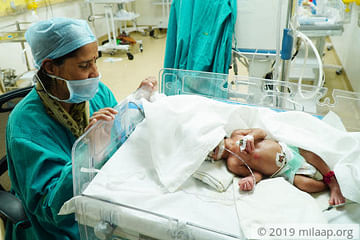 The Baby Is On Ventilator Support And Has Life-Threatening Infections

His parents don't have anything left with them and they'll lose him without your help.