'We Lost One Baby...We Are Praying For A Miracle So That The Other One Survives' | Milaap
Receive tax benefits by donating to this cause.

'We Lost One Baby...We Are Praying For A Miracle So That The Other One Survives' 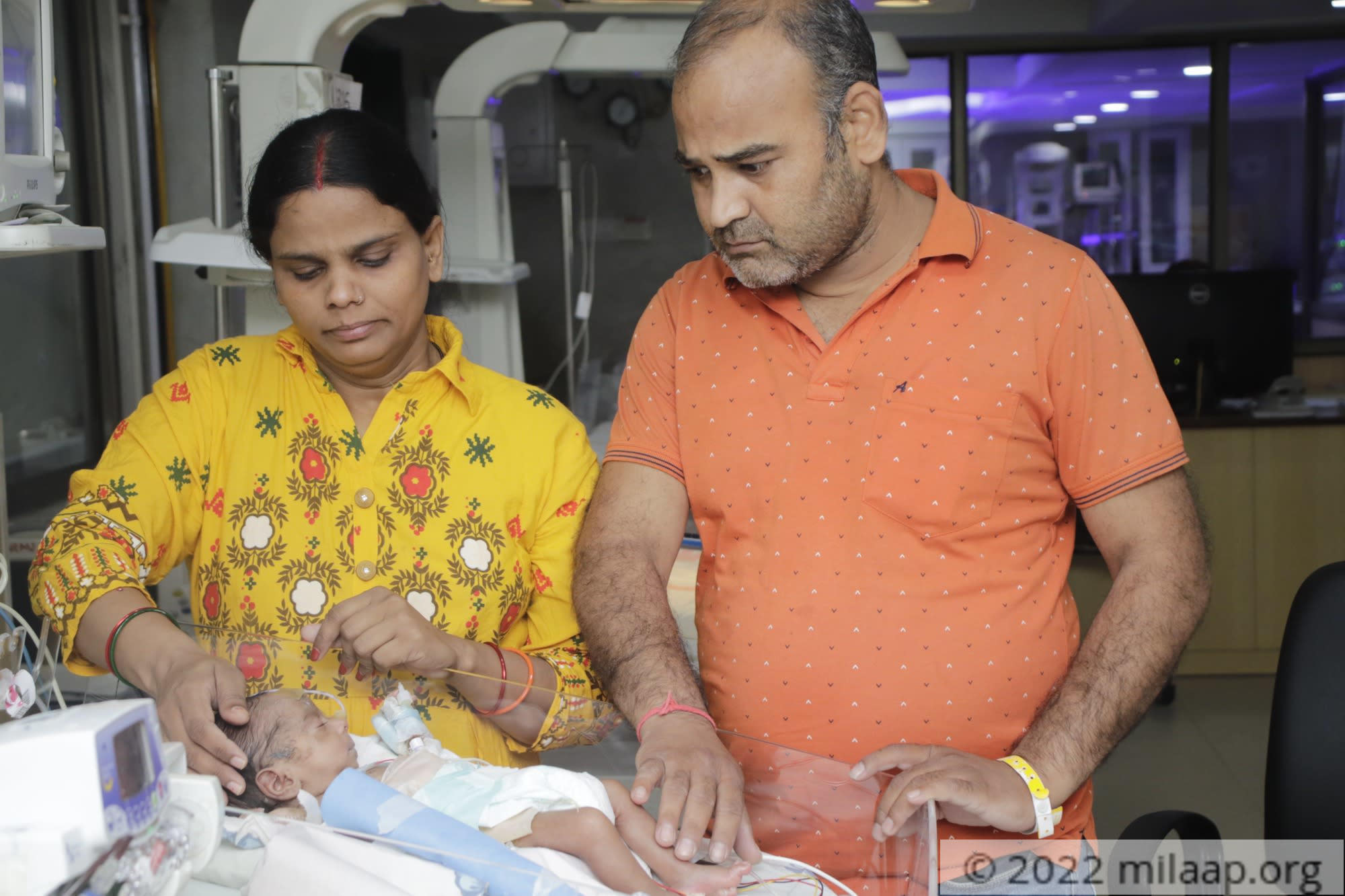 “We had twin children 17 years after marriage. It was a very happy occasion. They were born slightly premature but they were discharged soon because they were doing better. We took them home and they were both all right. Suddenly they both fell very sick and we lost one of them.” – Yogendra, father of the baby

When the children developed severe and constant loose motions, Yogendra knew it was not normal. Despite being told by two different doctors that this was normal for babies, from the beginning he had a sinking feeling that the babies were very sick. He insisted and got them admitted a week from when they fell sick.

“When we got them admitted, they said there was bleeding in their stomach. The younger, healthier twin suddenly passed away in 36 hours. The doctor said if we didn’t take the other baby to a bigger hospital, he wouldn’t last another day. Since then, he has had two surgeries for intestine infection and needs another one. The next four weeks, he needs constant monitoring to live.” – Yogendra

Yogendra and his wife Shashiprabha went from feeling blessed about their miracle children to feeling like they failed as parents right in the beginning. They lost one of their children and they keep thinking back to their actions and what they could have done to prevent their baby’s untimely passing. They are focused on saving their baby but are frightened and tired.

“They were doing well. I thought the doctors would give them saline for the loose motions and then we would go home. But this happened. I keep thinking I could have saved them both by maybe keeping them apart. Maybe the infection spread from one to the other. Or I should have taken them to a big hospital right in the beginning. I know it is too late now, but these are the thoughts I keep having.” – Yogendra

Yogendra works in a shop in Delhi and earns Rs 12,000 a month. For his children’s treatment he has spent 10 lakhs so far. He arranged for this using all his savings and selling off their small parcel of land in their village in UP. But the toughest part has only started and he needs a lot more to save his baby. To live, the baby’s health needs to be monitored for the next few weeks because his fragile body has gone through a lot.

“We lost a baby, and we sold off our farm and we took out all the money we could borrow. He needs one more surgery and then needs hospital stay. We have nothing except this child now. God has to help us save him. What do we have left now?” – Yogendra

The doctors have given the baby a good chance of surviving this early illness and making a complete recovery. But only if he gets one more surgery and his condition is closely monitored. Yogendra wants to save this baby more than anything but does not have the means to do so.