You are sending a message to
Dr. Anuj Rastogi
Go back

“The only time I held our baby was in the ambulance on the way to the hospital, right after his birth. Every breath he took was a painful struggle, and we could hear him gasping all the way. I felt his tiny body tremble, and there was nothing we could do. He was immediately placed on ventilator support. But that was just the beginning of his fight. Soon, his platelet count dropped extremely low, and in two days he was diagnosed with jaundice. In the past 21 days that he’s been alive, our baby has had blood transfusions, medicines and food pumped into him through tubes, and not a single day without pain. The only way he can be saved is if he stays in the NICU longer, but I have little left to go on.” – Chanderprakash, the baby boy’s father

Every few hours, Chanderprakash receives a worried phone call from his wife, Rekha, asking about their baby. “Did the doctor say anything else? Was he awake when you went in? Is he eating?” she asks, eagerly waiting for even the smallest positive response as she sits miles away in their small home holding their 3-year-old daughter. Their baby boy has been fighting for his life for 21 days now, but his fight isn’t over. He needs to stay in the NICU for one more week to survive.

Their baby has fought hard so far, but only continued treatment can save his life

Rekha and Chanderprakash’s baby boy was born premature on 28 July. Rekha was in her eighth month of pregnancy when she felt a pulling pain in her stomach. She brushed it off, but soon the pain became unbearable. Rekha knew something wasn’t right.

“She called out to me, and when I ran to see her, she was clutching her stomach and asked me to take her to the hospital. We never imagined that our baby would be born in so much pain. We were asked to take him to a bigger hospital in an ambulance because his condition was only deteriorating. He started breathing on his own only a week ago. He’s making little progress every day, and while I should be relieved, I can’t help but worry about how I’m going to continue his treatment. He needs to stay in the NICU till he’s stronger, but I can’t afford it any longer.”

A helper in a small shop, Chanderprakash can’t save his baby from death on a meagre income

Chanderprakash hasn’t been able to work for nearly a month. He worries that he might not even have a job to go back to. As much as it broke her heart, Rekha had to go back to the village to be with their daughter. Rekha cries on the phone every day to Chanderprakash, but they could only afford to bring her to the hospital twice. Chanderpraksh has exhausted everything he had on their baby’s treatment so far, now he’s at a dead-end.


“The only way I could start his treatment was by taking loans. My salary as a helper in a small shop wasn’t enough, but even after borrowing, I can’t continue our baby’s treatment. I’m in debt, I have no savings of my own, and I’ve spent the last few weeks in the hospital. I think I’ve lost my job. But the only thing I’m worried about is saving our baby. I can’t do it on my own.”

Your support will save their baby boy's life. 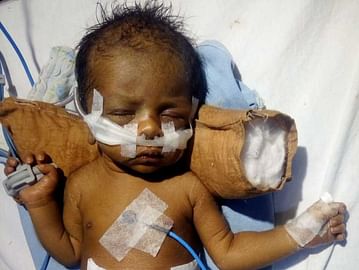 The Little Fighter Can Only Make It With Continued Treatment, But His Parents Can't Save Him

Their premature baby needs to stay in the NICU for one more week to survive. You can help save him.