This Newborn's Cradle Lies Empty At The Home While His Parents Struggle To Save His Life | Milaap
loans added to your basket
Total : 0
Pay Now

RS
You are sending a message to
Riddhi Shah
Go back

Shares
Shares
Share on whatsapp
The happiest day in Chhaya and Laxman’s life was two months ago when their second kid was born. With plans of celebrations already in motion, the family was caught unawares for the tragedy that was coming.

On April 27, 2019, the couple’s gynecologist informed them that their baby had to be urgently moved into the NICU.


“The doctors told us that the baby was in serious condition as his stomach had swelled. They said two of his veins were blocked. Here we were preparing to take our baby home and there the nurses had already made arrangements for our baby to be shifted to a bigger hospital. That day we got the biggest heartbreak of our life,” said Laxman, father.

Laxman and Chhaya have been married for three years. The newborn is their second child. Their eldest daughter is 2-years-old and is excitedly waiting for her little brother to come home and play with her.


“Sometimes, due to the swelling, he cries in pain and there is hardly anything we could do to console him. At least the doctors have now allowed his mother to hold him,” said the father.

Seeing him in pain is too much to bear

“Whenever he is awake, you can see that he is searching for his mother. The moment his mother is out of his sight, our baby starts crying. It is almost like all his hope and strength is through his mother. But Chhaya feels she is failing, seeing that her baby is in hospital and there is little she could do to help,” said the father.

Laxman and Chhaya live with their parents. Laxman is the sole earning member of the family and makes around Rs 10,000 per month in his private data entry job.


“It is not much. I have old parents at home also. So far, the bill has come to Rs 2 lacs and we have managed to pay Rs 60,000. We have taken a loan from people. They are also expecting us to return the money. I am very worried, I don’t know how will I manage to arrange for this amount and bring my baby home,”  said Laxman.

With your support, these parents can bring their newborn home. 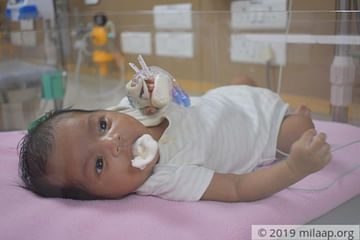 The Newborn Has Been In Hospital For A Month, Her Parents Are Struggling To Save Their Son

Chhaya's newborn need to be in NICU to be able to live. Your contribution can ensure that a life...

UPI: givetochhayafunds1@yesbankltd (Copy to clipboard)
Or
Click here to read the instructions before you make a bank transfer.