Tailor Who Can’t Afford Train Ticket To See Newborn In ICU Is Struggling To Save Him | Milaap
loans added to your basket
Total : 0
Pay Now

Shares
Shares
Share on whatsapp
Amrin is all alone in the hospital in Mysore. It’s been 28 days since her baby was born and she hasn’t even held him yet. Her husband, Mohammad Siddiqui has not been able to visit his baby more than twice. It’s been over a week since he saw him, and he fears he might never get to again. Siddiqui now can’t even afford the 60 -70 rupees for the train ticket from Bangalore, his baby’s treatment is beyond his means.

“When I saw my baby for the first time, his hands, feet and lips were almost black. He didn’t have any oxygen in his body. We can’t afford to keep him here any longer, but without the oxygen support, he won’t make it.” – Amrin

Amrin’s pregnancy was a difficult one. She had terrible morning sickness. She would throw up so much, that she would be dizzy. Amrin was advised to be on complete bed rest for the rest of her term. So, last month, she went to Mysore to stay with her mother. On the morning of February 6th, Amrin was in a lot of pain.

“It started around 10 am. When it didn’t get better, I went to the hospital. The doctor said I would have to deliver the baby. It was only the seventh month of my pregnancy, I was worried. I thought he wouldn't make it." - Amrin

Amrin delivered her baby boy that evening, and he was rushed to the NICU. However, her husband couldn’t be by her side. He was in Bangalore desperately looking to borrow money to save his child. Siddiqui reached Mysore at midnight, with Rs. 10,000 at hand – all of which is now gone.

He earns Rs. 130 for every shirt he stitches, it isn’t enough to save his baby

In the past month, Siddiqui has only been able to see his baby twice. He also has to take care of their 10-year-old son in Bangalore, and he couldn’t stop work. As much as Siddiqui wants to be in the hospital, he can’t. He’s a tailor who earns Rs. 130 for every shirt that he stitches. Every rupee now counts for him. In the past month, he’s not been able to spend more than Rs. 50,000 on his baby’s treatment, but the expenses are only piling up.

Amrin refuses to leave the hospital without her baby

Amrin sits by her baby's side every two hours, praying for a miracle. The sight of him lying helpless in the NICU still breaks her heart.  Amrin's mother is unwell and can't be with her at all times, she has to do everything on her own. She stays in the hospital and refuses to leave without him. Their baby boy needs to stay in the NICU for at least 2 weeks more to recover. He can only go home when he can breathe without oxygen support and is stronger.

Help Amrin and Siddiqui’s baby get stronger and go back home.

The specifics of this case have been verified by the medical team at the concerned hospital. For any clarification on the treatment or associated costs, contact the campaign organizer or the medical team.
Click here to save Amrin's baby 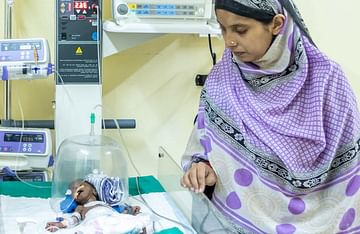 "His hands, feet and lips were almost black. He had no oxygen in his body"

Amrin's 1-month-old baby boy needs to stay in the NICU for longer to recover. You can help him.