Suffering From Painful Liver Condition Since Birth, 3-Month-Old Needs Urgent Transplant To Live | Milaap
Receive tax benefits by donating to this cause. 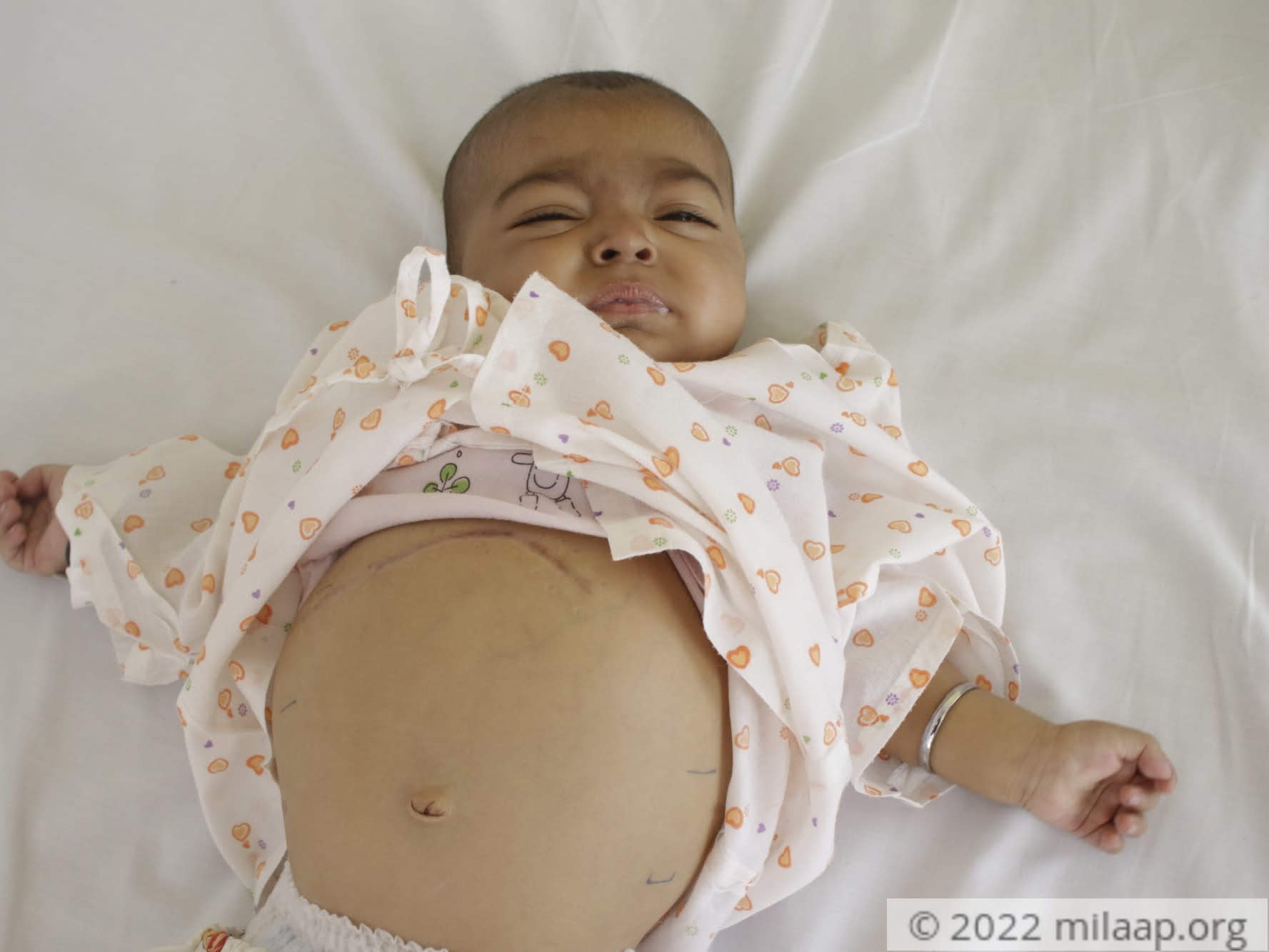 “A few days ago, she was discharged after a long hospital stay and we were halfway into our journey home, when she started getting sick and had severe diarrhoea. We had to return to the hospital the very next day and admit her again. She has a bacterial infection in her bile ducts, a sign that her condition is worsening, and the doctors are pushing for a liver transplant. I could lose my daughter to this condition, but her cure is just not within our capacity to afford…” - Karishma, mother

They thought it was jaundice, but it turned out to be liver failure

Baby Naisha’s skin had been pale and tinged yellow, since birth. Not quite alarmed at first since jaundice is common in newborns, her parents were asked to wait it out, as it would clear out on its own. But a month later, when her whole body had turned a deeper shade of yellow, her parents knew it was a matter of deep concern.

“They said that her bile ducts were blocked, and she needed immediate surgery or it could lead to liver damage. Following the surgery, they told us she would need at least another 3 months to recover and we were hopeful too, seeing that her body was starting to regain colour. But just as we thought she was getting better, we were proved wrong in the most terrible way.” - Karishma, mother

An unsuccessful surgery led to her liver failing

The 3-month-old was diagnosed with biliary atresia, a congenital condition where her bile ducts were either premature or completely absent, due to which bile wasn’t flowing from the liver to the gallbladder. Naisha underwent a kasai surgery, where a segment of her small intestine was replaced as a channel for bile drainage. But as it turns out, the surgery failed, causing her jaundice to flair up.

“When she was first diagnosed, they told us that after her kasai procedure, she would need one or two surgeries in the upcoming years to make a full recovery. We had thought we would have enough time to arrange for the money that her surgeries would require. Until, a few weeks ago, when her stomach started to swell up. The doctor dropped another bomb on us, right then - her liver has sustained significant damage, and is now at risk of failing altogether.” - Aman, father

She needs a liver transplant, but her father isn’t in the position to afford it

Naisha’s condition is rapidly deteriorating and the little girl has suffered endlessly since the moment she took her first breath. Her gut-wrenching cries fail to hide the extent of pain and misery that she has suffered at the hands of this disease. Now, a liver transplant is the only out of this, and her father is prepared to give her a part of his liver. But the only thing holding him back is the lack of funds.

“We come from a small town in Jalandhar, Punjab, where I run a small auto parts business. All these years, I thought I made a decent income to support my family. It was only when my daughter fell ill that I realised just how meagre it is. The amount I earn from selling spare tractor parts and engine oil all day, is nothing compared to the amount we will need to save her life. Naisha has been with us a few short months, but everyday of her life has been a struggle to live. I just want to put an end to her suffering, but I am failing miserably…” - Aman

These parents are running out of time and need to arrange for INR 18 lakhs for their daughter’s life saving transplant. The longer the delay, the more the danger to her life. Your contributions will go a long way in helping Naisha. Click here to donate.
BN
Patient Baby Naisha is 3 months old, living in New Delhi, Delhi
MT
Being treated in Medanta The Medicity Global Health Pvt Ltd, New Delhi, Delhi