After Losing Her First Child, This Mother Is Desperate To Save Her 2-Year-Old From Bleeding To Death | Milaap
loans added to your basket
Total : 0
Pay Now

After Losing Her First Child, This Mother Is Desperate To Save Her 2-Year-Old From Bleeding To Death

"The first time we admitted Maheer to the hospital was when he started bleeding profusely from his nose. The bleeding went on for 3 days. I was scared. These symptoms are familiar to me. I went numb when the doctors told me that Maheer has the same disease that killed my first daughter, Fizu, when she was barely 5. I knew I had to fight harder than ever. The problem is that he looks fine, but keeps falling sick every 15 days. When he starts bleeding, we know it’s time to rush him to the hospital. Nobody knows when and what can take away his life.”

Naseem and Faruk feel that through Maheer, they have got back their lost daughter. Unlike Fizu, Maheer never had obvious symptoms of something deadly until he was 1-year-old. The only symptom was that Maheer became blue after his vaccination. But after a year, Naseem knew it was the same thing that killed her first child.

“Almost 8 years ago, my elder daughter, Fizu, needed platelet transfusion on a holiday. She was admitted to the hospital after we found blood in her stools. We couldn’t get matching blood from anywhere. When we could finally got blood, it was too late. After 15 hours of constant blood transfusion, Fizu took her last breath. She was no longer with us. I can’t afford to lose my 2-year-old Maheer to the same deadly disease.” Nasseem, Maheer’s mother."

Maheer has one of the rarest diseases called glanzmann’s thrombasthenia. It’s a condition where the body develops platelets, but they don’t work. As a result, the patient has a tendency to bleed from everywhere. There are very few treatments available, but there is hope for Maheer. A bone marrow transplant can save him.

“We couldn’t save Fizu because we didn’t know much about the disease, and there wasn't much treatment available then. I still can’t forget the painful death she had. Whenever she got hurt, the bleeding wouldn’t stop. A day before the unfortunate incident, Fizu told me that she had a stomach ache. I got a little worried when she didn’t come out after half an hour. I entered the bathroom to find my child unconscious in a pool of blood that she had pooped. After all these years, the sight still haunts me.”

Before Naseem could get over the pain of losing a child, she is struggling to save Maheer

After losing her first child, Naseem had been extra cautious about Maheer. Despite being careful, they found out that Maheer has the same disease that killed Fizu. It took Naseem a while to accept that she again has to begin the same fight. She didn’t even have the strength to go to the hospital.

“Faruk and I have grown up without a mother and we couldn't get an education. When Fizu was dying, I didn’t know that I could have saved my girl. I lost her. Faruk and I couldn’t leave the hospital even to bathe. None of these could save my girl. But I am not going to let Maheer slip away or be in pain all his life. I'm praying to Allah every minute to find a way to save my son. For a parent, losing a child is worse than death.”

Faruk is ready to bear any pain to save his baby, but he can’t do it alone

Faruk works as a carpenter in Tilaknagar, Delhi. He is still struggling to pay off debts of about Rs 15 lakhs from Fizu’s treatment expenses. He has kept himself strong to pull Naseem through all the pain and suffering. They were forced to sell their house to save their child. For them, losing another child will be no less than killing themselves.

Maheer is suffering from one of the rarest diseases which leads to profuse bleeding. Only an urgent bone marrow transplant which costs Rs 10 lakhs can save Maheer. Luckily, Faruk is a complete match for him. The only constraint is that the family has exhausted every possible resource and have nothing left to save their child. Only your support can save Maheer from this dreadful disease.

Your support can prevent him from bleeding to death 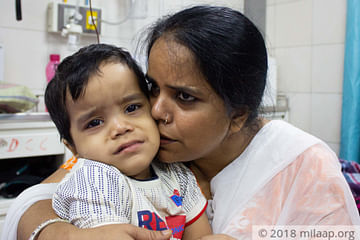 2-year-old Maheer has one of the rarest disease. He can bleed to death without urgent treatment