This 4-Year-Old Girl Who Sweats Blood All Over Her Body Needs Urgent Treatment To Survive | Milaap
loans added to your basket
Total : 0
Pay Now

A
You are sending a message to
Anwar
Go back

“For over 2 years, my daughter, Ahana, has been constantly bleeding from all parts of her body. Sometimes, she bleeds 3 to 4 times every day. Blood oozes out from her eyes, ears, nose, mouth, her scalp and to make it worse, it also oozes out from her private parts. I’ve been to countless doctors and none of them can explain what’s wrong with my daughter. It's a horror to watch your own daughter’s eyes bleed.” – Mohammad, Ahana’s father

Just when Ahana was around 1, she started bleeding from her nose and would throw up blood too. She has now been diagnosed with the rarest, deadliest and the most horrific condition any parent could ever witness. Now, after over 2 years of bleeding continuously and being admitted every other week to the hospital, her bleeding has only become worse.

Ahana has been through pain and trauma for 2 years now

“When I first saw blood, I was so scared. Seeing so much blood coming out from a baby is just horrible, I was in shock. In last 2 years, she has been admitted over 50 times and we’ve been to countless doctors and hospitals. Her condition is so bad that even if she plays around for some time, she just falls and becomes unconscious. There are days when she won’t open her eyes for over 20 hours. Now, she even has purple patches all over her body.” – Mohammad

Mohammad praying for his daughter, Ahana

To understand the problem and get her treated, Mohammad has taken Ahana to multiple hospitals in Hyderabad, Bangalore, Mumbai, and Vellore. After months of running around, the 4-year-old was diagnosed with hematidrosis, a deadly condition which causes excessive bleeding from every part of the body. Due to this, Ahana not only bleeds from every part of the body but also sweats blood.

“Now, there’s blood in her urine too and she just can’t stop sweating , even in an air-conditioned room. She gets seizures too and her body starts shaking. Till now, she has received so many blood transfusions that it just breaks my heart every time I think about it. No child should ever go through this. Every doctor we’ve seen has been baffled by her condition. Her blood pressure sometimes becomes extremely high and sometimes, so low that she falls unconscious. Now she even bleeds from her navel.” – Mohammad.

The 4-year-old has beeny this deadly disease for 2 years and has been admitted to the hospital countless times, out of which, she has spent a lot of days bravely fighting for her life in the ICU. She needs constant blood transfusions and supportive care to survive.

Mohammad has sacrificed everything and is desperate to save Ahana

“I’ve seen my daughter’s eyes bleed and I think that’s the worst thing any parent could witness. I work at a gym and earn about Rs. 8000 a month, but I have spent all my savings and borrowed over Rs. 4 lakhs to save my child. I’m neck-deep in debt. She needs special powedered milk, each of which costs Rs 1,000. Every month, she needs around 12 such packets. She gets admitted almost twice every month and we spend around Rs. 60,000. There's no money left for anything."

Ahana's mother, Nazim, cries uncontrollably seeing her daughter suffer. To find every possible way to cut down on expenses, the helpless parents were even forced to make their 5-year-old son, Ahmad, quit school.

4-year-old Ahana has been bleeding from every part of her body for over 2 years. She even sweats blood and her only hope of survival is to continue getting blood transfusions and additional treatments. Mohammad has spent over Rs. 6 lakhs and now, his daughter’s condition is so critical that he needs an additional Rs. 7 lakhs to make sure she gets the treatment on time. He simply can’t save her without your help.

Your support will save 4-year-old Ahana and will ensure that the horrific bleeding from her body parts stop. 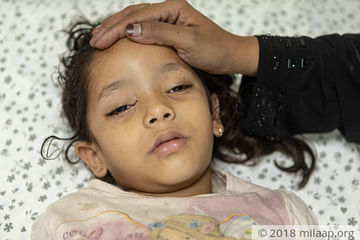 4-Year-Old Ahana Has Been Bleeding From Her Eyes, Mouth, Ears, And Many Other Parts

Ahana's parents can't see her bleed anymore. They are devastated and need help.