Even After Selling His Only Piece Of Land, This Farmer Cannot Save His 2-Year-Old Girl From Cancer | Milaap
loans added to your basket
Total : 0
Pay Now

UM
You are sending a message to
Utpal Mondal
Go back

Even After Selling His Only Piece Of Land, This Farmer Cannot Save His 2-Year-Old Girl From Cancer

“We prayed for years before we were blessed with our little daughter’s birth. We named her ‘Aaradhya’ because she was God’s gift to us. Her smile brightened up even our most difficult days. Now I look at Aaradhya’s face and cannot imagine that just two months ago everything was fine with her. Cancer has made her very weak and she cries all the time, my chirpy little baby is no longer the same. She is very scared of the hospital and doesn’t want us to leave her side at all. Nights after nights she cannot sleep because of the pain she is going through."- Utpal, Father of 2-year-old Aaradhya.

Baby Aaradhya is battling a rare form of bone cancer and the only way she can survive is through chemotherapy followed by an urgent surgery. But her family is too poor to afford the surgery which might save their little daughter.

Things were looking fine for Aaradhya until a harmless swelling in her right shoulder started growing and scared her parents. Utpal, Aaradhya’s father and Jayanti, took her to the hospital where after some initial tests they were told that their little daughter has been diagnosed with a rare form of bone cancer called Ewing Sarcoma that affects only 1 in a lakh. It is a cancerous tumor that usually affects the long bones, such as the thigh bone, shin bone and upper arm bone. An aggressive form of cancer, this spreads to other parts of the body like that of lungs, bone marrow and other soft tissues.


Little Aaradhya when she was healthy and fine

“Our whole world came crashing down as we heard the word ‘cancer’. I couldn’t believe that my daughter who was all hale and hearty just few days back will die unless I arrange for the surgery. Jayanti kept on crying uncontrollably and there was no way I could do anything to console her,” - Utpal.

Soon after she was diagnosed with cancer, Aaradhya has been undergoing chemotherapy. The chemotherapy has taken a toll on the 2-year-old’s health. She is unable to eat anything, throws out whatever she eats and is always crying out in pain.

“It is heartbreaking to see Aaradhya go through so much pain. She is just 2 and at a time when she should be playing around she is going through such a painful treatment. I wish there was something I could do to make her feel better even a little,” - Jayanti.

Utpal is a small farmer and who used to work in his land and struggled to make the two ends meet. When Aaradhya was diagnosed with cancer, he decided to sell his land  without a second thought to arrange for the funds for the initial treatment. However, the surgery will cost him 7 lakhs but after selling his only piece of land he was able to get only a lakh.

“I didn't even think twice before selling my land. At that point in time all that came to my mind was my Aaradhya’s treatment. But now the doctors have told us that an urgent surgery is her only chance to surviveand what I have is not enough for treatment. I am a poor farmer and I don’t know how I will arrange for so much money which I have never seen in my life,” - Utpal.

2-year-old Aaradhya has been diagnosed with an extremely rare form of bone cancer. She needs urgent chemotherapy followed by a surgery in a month’s time. She is in a lot of pain right now, and the cancerous tumor in her right shoulder will soon spread to other organs of her body. Aaradhya risks losing her limbs to cancer. If treated in time, Aaradhya can win her fight against cancer and live a normal life. Unfortunately, her father is a poor farmer who is in no condition to arrange for the huge sum of money for her daughter’s surgery. Your kind contribution can help Utpal and Jayanti save their little Aaradhya’s life and give her a healthy future.

Your support will save Aaradhya 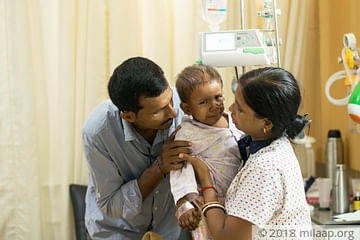