This 5-year-old Will Bleed Out And Die Without An Urgent Liver Transplant | Milaap
loans added to your basket
Total : 0
Pay Now

You are sending a message to
Adhish Vishal sukale
Go back

Shares
Shares
Share on whatsapp
Mala held her son's tiny withered hand. He had just managed to rest but she could see he was in pain. She fought back her tears and held his hand close to her. Not many days left for 5-year-old Aadhish if his condition deteriorates like this. His liver is fully damaged but Mala has a chance to save him. A liver transplant! But how can she and her husband who has nothing left pay for the surgery.

Little Aadhish’s parents noticed that he had a swollen tummy when he was just 6 months old. At first, they thought it would be gas and did not pay much attention to it until he started passing black stools and even developed a high-grade fever.

“It was very unusual because till that point, he was a normal baby who was not sickly or fussy about anything. We started seeing a difference in him. He became irritable and would not stop crying. We had to put our baby through a series of painful tests and scans before the doctors diagnosed him with a rare liver condition where veins in his liver get blocked, leading to poor liver function.”-Vishal Sukale, Aadhish’s father.

Little Aadhish was diagnosed with a severe liver condition when he was just 1, and it made him vomit blood for hours as it caused internal bleeding. His parents could not believe what was happening to their baby because he would not stop. He was admitted for weeks at the hospital because it was almost impossible to stop the bleeding.

“He was so small and frail that he didn’t have the energy to keep vomiting continuously; but his body would just not budge. He would become unconscious and almost lifeless after these vomiting episodes. The doctors had to work  very hard to stop the bleeding inside the body that his defective liver was causing. We thought he would die from all the blood loss.”-Mala, with tears in her eyes.

Ever since he was diagnosed with the severe liver disorder, Aadhish has been put through so many procedures to treat his condition. But they could only temporarily help him.

“From sophisticated procedures like glue therapy to bigger procedures, we made sure he got the best treatment. We even had to reach a point where we borrowed from people because the frequency of his hospital admissions kept increasing. But we wanted him to be alright, that’s all we have always wanted. But now his liver has become 100% damaged.”-Vishal.

Aadhish’s parents Vishal and Mala are exhausted – both from unsuccessfully trying to help their son and trying to keep up with expenses. Vishal works in a private organization and earns only around Rs 15,000 per month, but now he does not go to work regularly. He has already paid around Rs 13 lakhs for Aadhish’s treatment by taking loans and borrowing from friends. He needs more than Rs 16 lakhs for his son’s liver transplant that will decide whether he will live or not.


“I am trying to arrange the money from different sources for the transplant but nothing has worked out so far. His mother will be his donor, but we don’t have the funds for the surgery. Meanwhile my son’s condition is getting worse by the minute. He has stopped eating food and is losing weight rapidly. He has also lost a lot of blood because of the vomiting. I am helpless.”-Vishal.

Vishal and Mala know this is the final chance for his son to live. They cannot bear the sight of their son lying down lifeless after vomiting blood. The pain of the parents who tried everything possible in their capacity to treat their son but failed in the last step is unimaginable.

With our help, they can save their little son's life. 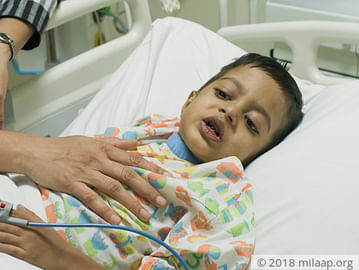