Akhilesh Is About To Be A Father But He’ll Lose His 7-Year-Old To Cancer Without Treatment | Milaap
loans added to your basket
Total : 0
Pay Now

MB
You are sending a message to
Manuj Bharti
Go back

Shares
Shares
Share on whatsapp
Just before the family got to know that Atish has cancer, their happiness were on the peak as Anjali, Atish’s mother got a confirmation of her pregnancy. Akhilesh, Atish's father was overjoyed. He packed his bags at work and decided to go home to celebrate the good news with his family. But he returned to his son screaming and crying in pain instead.


“Atish was very happy  when I was talking to him on the call . He was so excited that he was going to be a brother but when I reached home, he had a high fever. Later he started crying saying his entire left leg is paining. He said it was so bad as if someone was hammering on his leg. Soon after some tests we got to know that a cancerous tumour is growing in his leg and...it is going to take away my son if treatment is not done in time," - Akhilesh

Since the time Anjali got to know that Atish has cancer and they will be unable to afford the cost of his treatment, she thinks her pregnancy is just a burden and becoming a mother again does not give her as much joy as it should. She worries a lot and it is affecting her health too.

“And Anjali? Since then she has fallen silent.  She doesn’t talk much just stands or sits in a corner and weeps. She is 5 months pregnant now and… she thinks having a baby might cost her first child’s life. I don't know how to console her...I myself feel broken at the thought of my son dying.”- Akhilesh

Akhilesh works in a small company in Faridabad and earns about Rs 9000 a month, which is not enough to save his son. Atish has undergone 4 chemo sessions and after his 5th Chemo, he needs to have a major surgery to remove the tumour completely from his body.

“I borrowed from my colleagues,my relatives and everyone has supported me till now... but now the surgery will cost 12 lakhs and no matter how hard I try I won't be able to gather such a huge amount. I am afraid, I'm going to lose my son," - Akhilesh

Atish(7) suffers from Ewing Sarcoma (a type of bone cancer) in his left leg. He is undergoing chemotherapy since 4 months. It has not been easy for this little child. His appetite has fallen to one meal a day, that too just two rotis.

“He is in a lot of pain, he has to take pain killers thrice a day but it works only for some time only… after that again he cries and stays awake at night. Once he asked me to remove his leg because he couldn’t bear the pain anymore and that killed me inside that I am unable to save my poor boy," - Akhilesh

Only a major surgery can cure his cancer for good and he can live without pain. Akhilesh has tried everything to arrange for the finances but failed. He will lose his son without treatment but you can save Atish. With your small contribution this 7-year-old can beat cancer and live a normal life. 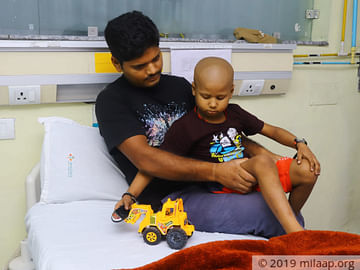 Atish Has A Growing Tumour In His Leg, He Needs An Urgent Surgery

Atish's father can't afford the treatment, your kind help can save his little boy

UPI: givetomanujmlp@yesbankltd (Copy to clipboard)
Or
Click here to read the instructions before you make a bank transfer.