6-Month-Old Ashwin’s Life Is Held Together By Medicines, He Needs A Liver Transplant In 2 Days | Milaap
loans added to your basket
Total : 0
Pay Now

6-Month-Old Ashwin’s Life Is Held Together By Medicines, He Needs A Liver Transplant In 2 Days 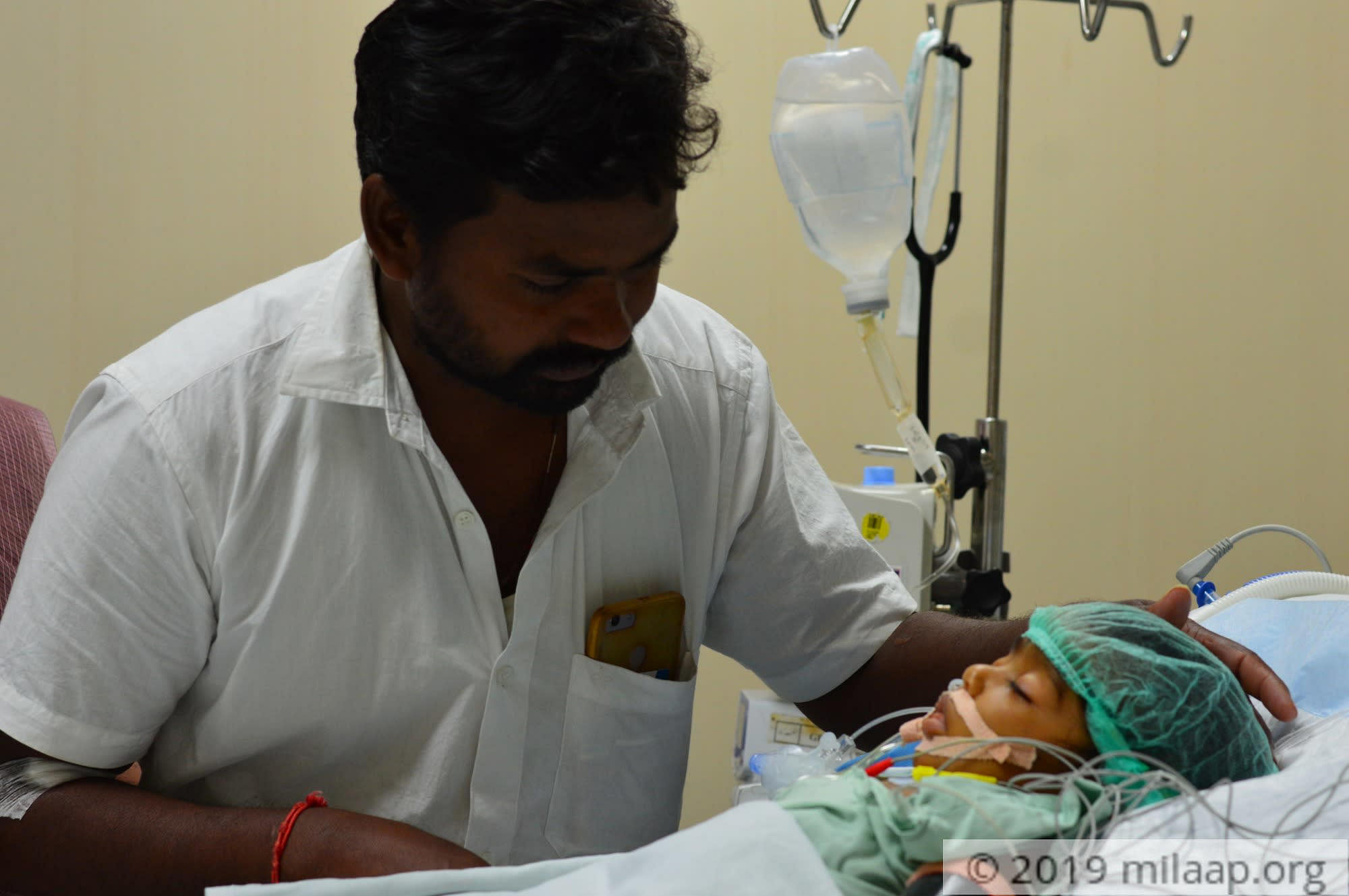 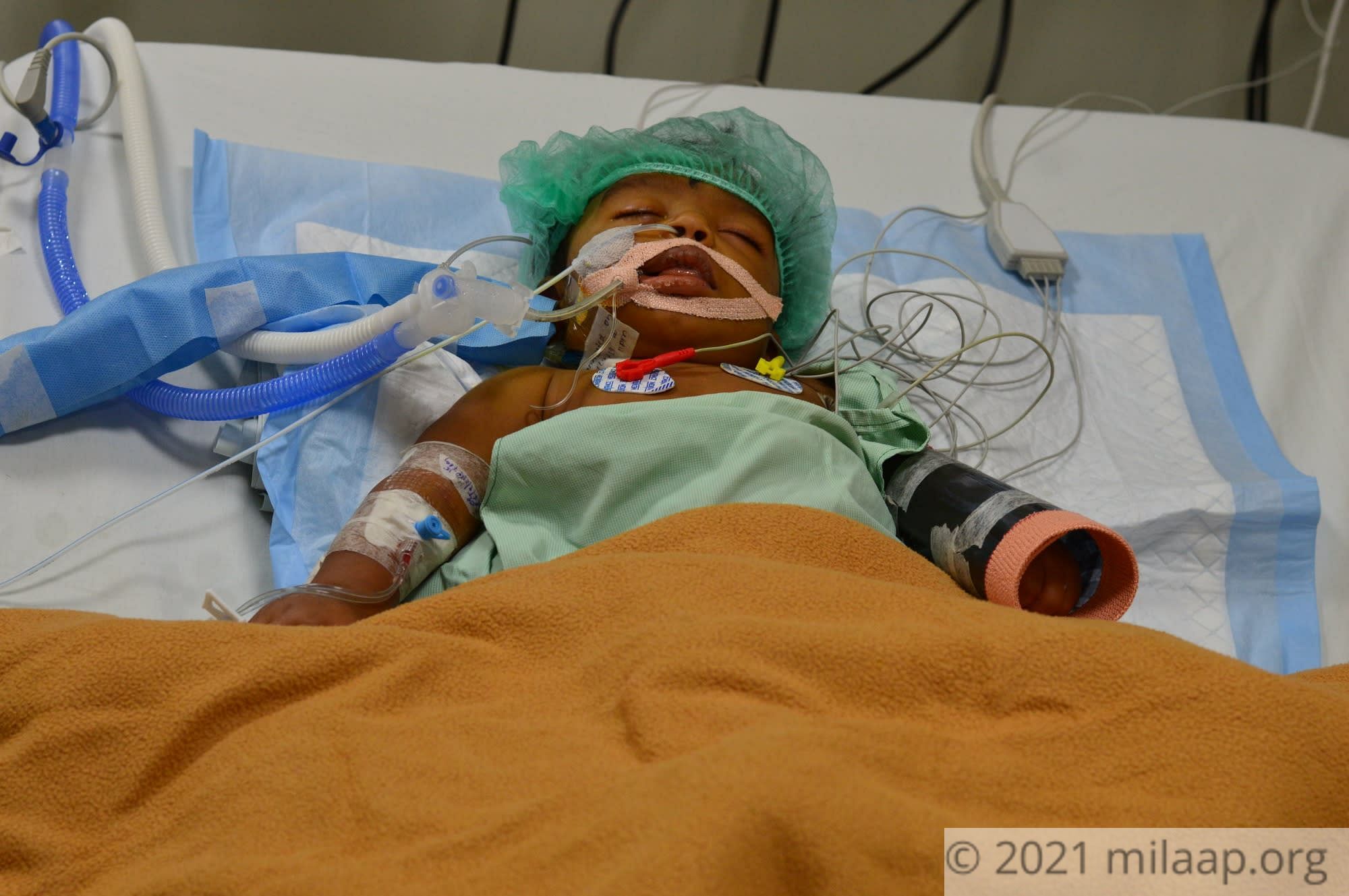 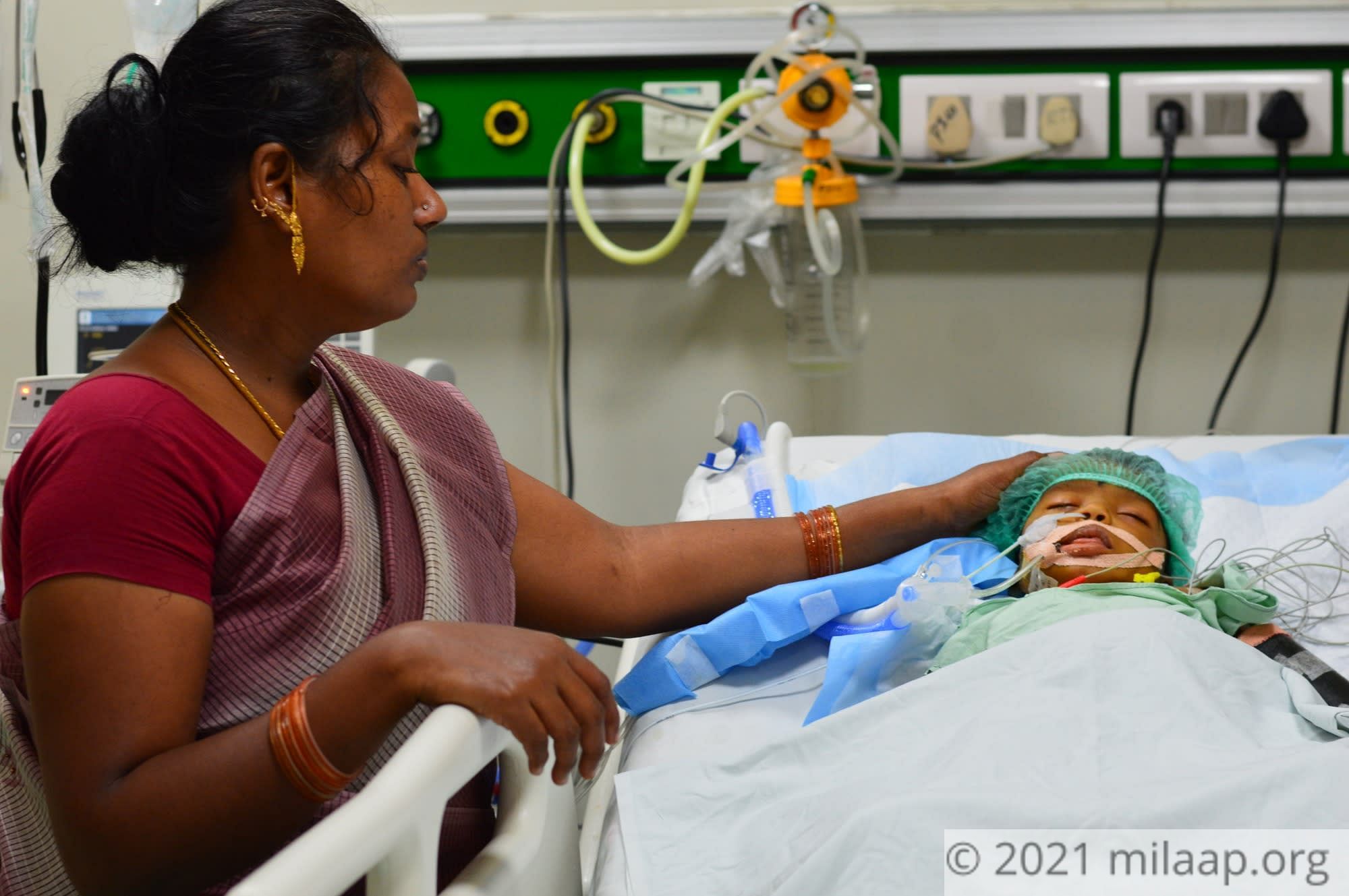 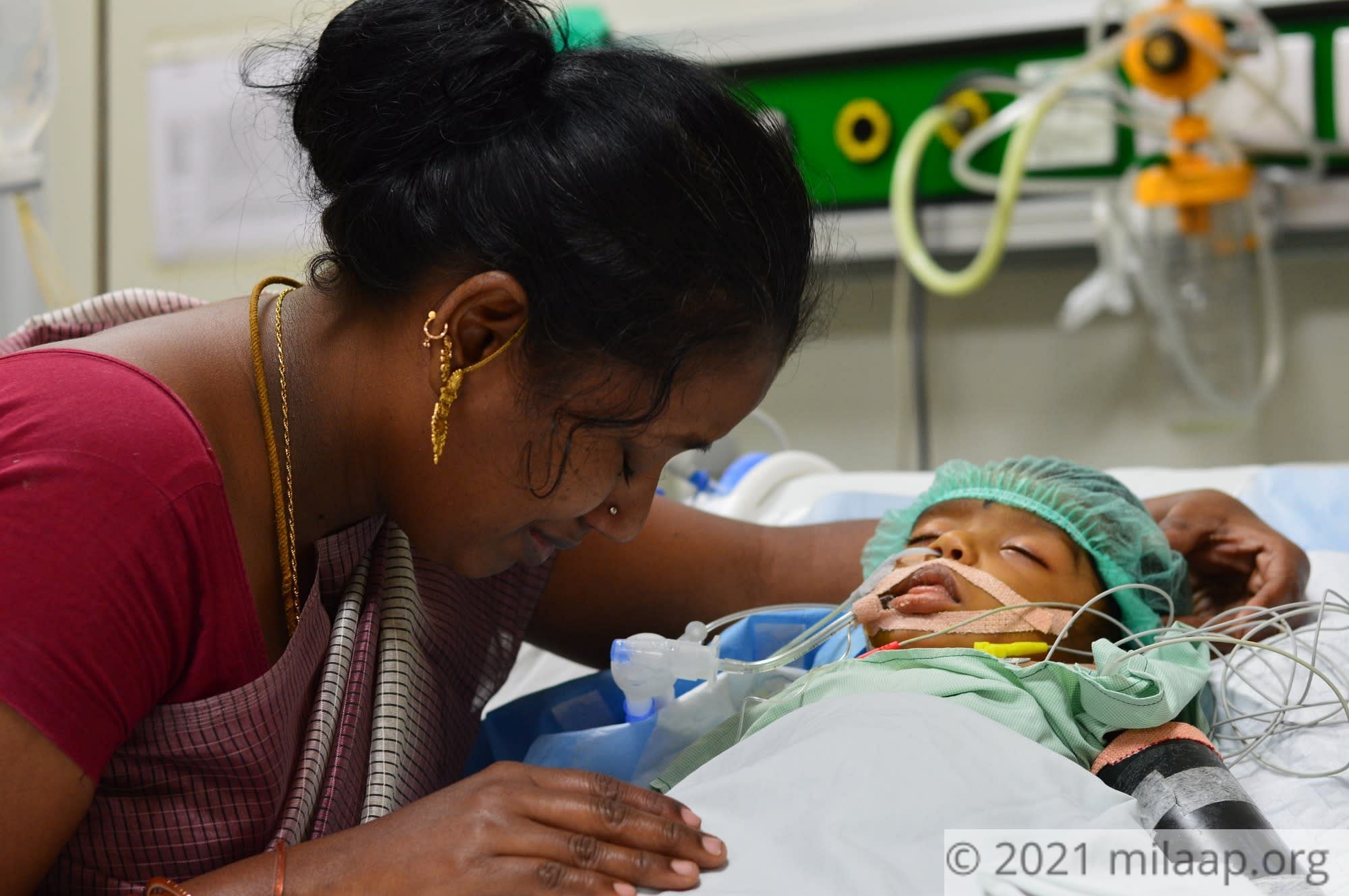 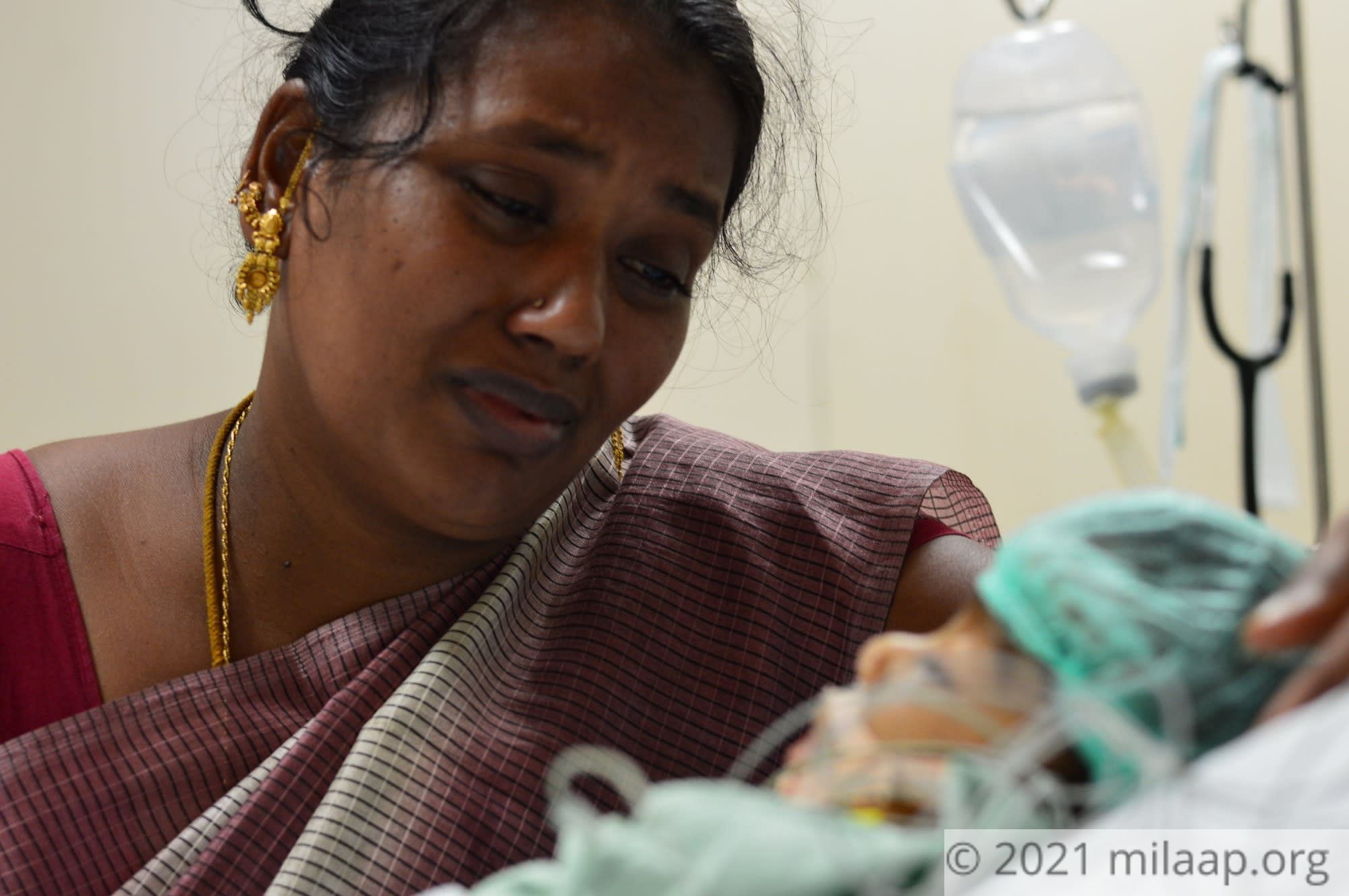 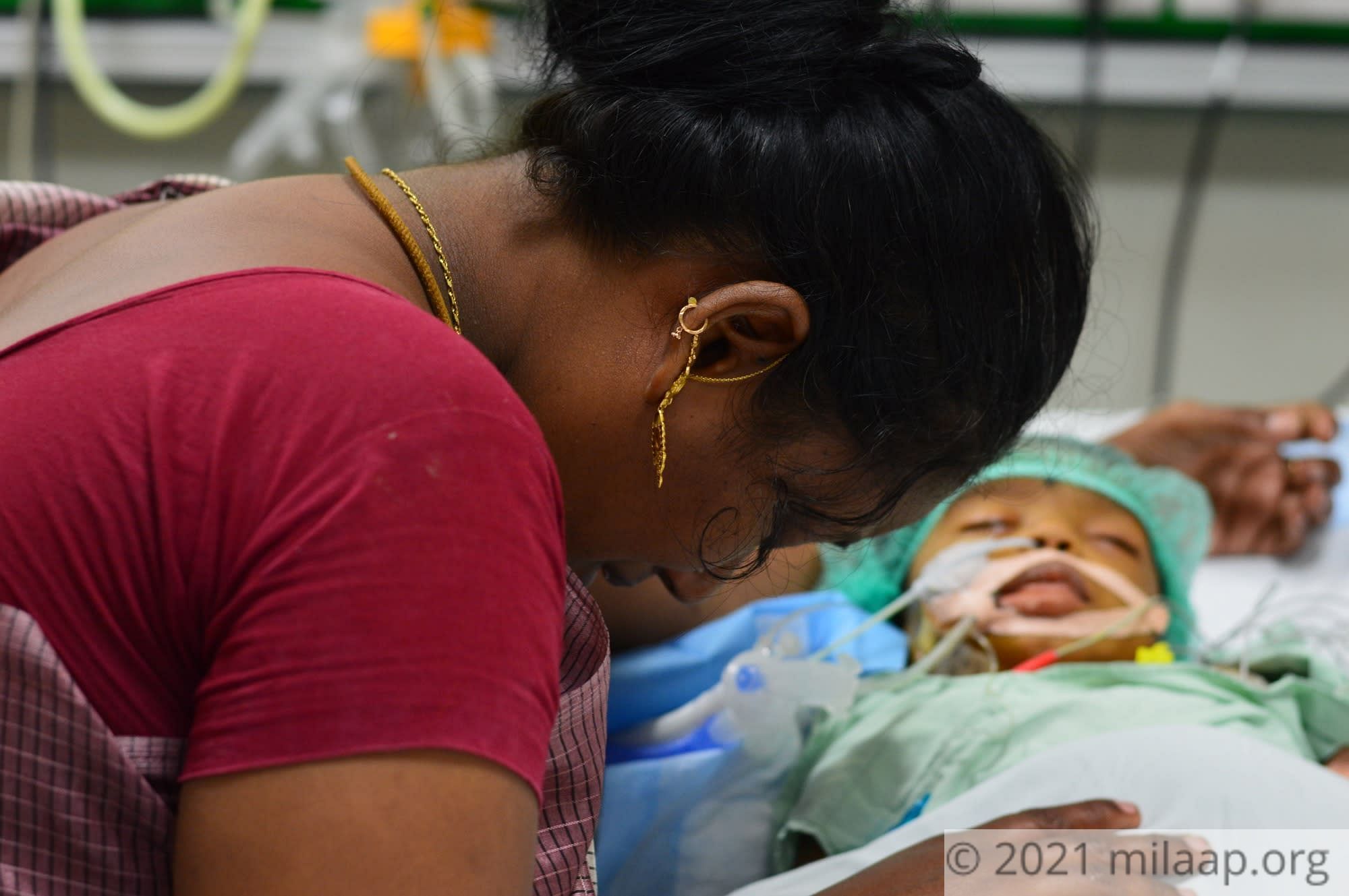 Our little Ashwin was our happiness. He is just six months old and only two weeks ago he started to roll over. My baby hasn’t even started calling me ‘Amma’. But now…I still cannot believe that we are here in a hospital praying each day so that he wouldn’t die. I carried him for 9 months - I won’t let anything in this world take away my son from me – Janaki, Mother.

Little Ashwin hasn't opened his eyes for the last few days. His liver has given up on him, he needs an urgent liver transplant.
6-month-old Ashwin was an active baby who was everyone’s favourite at home. He was healthy, playing and feeding well until one day he was down with a fever. His parents took him to a nearby clinic where he was prescribed tablets and syrup. But the temperature did not come down and the next day it only surged with his skin and eyes turning yellow.

When he got sick we thought it would be an ordinary fever. But when his eyes and skin became yellow I really got scared. He was crying loudly and when Janaki tried to feed him he vomited all over her. We took him to another hospital and after tests, they found out that he has jaundice and his liver is affected - Rajasekar, Father

Baby Ashwin was admitted to a hospital the next day to get treated. But within two days his condition got severe and his abdomen started swelling. He was recommended to another hospital overnight and his parents rushed him in an ambulance, not knowing what was hurting their little boy. Before they reached the baby started getting unconscious.

My son collapsed in my arms and hasn't yet opened his eyes. Only medicines are holding his life together

He fainted in my arms. I never felt so heavy to carry him until then. He was lifeless and I thought he died. Only after the doctors told that my child is alive I was relieved. Ashwin  hasn’t yet opened his eyes. They are treating him and his tiny body is full of tubes and wires. I am scared of moving away even for a second from his bed. What if he opens his eyes and searches for his amma? I believe that my prayers won’t go in vain. God will give me back my child -Janaki

Ashwin was diagnosed with Acute Liver Disease and the doctors are yet to find the reason why it spread fast without any symptoms. Right now the baby’s liver has sustained severe damage and more than half of the liver cells have lost its function. His life is held together by medicines and only an urgent liver transplant can save him now.

They can take my whole liver too. All I want is to save my Ashwin. But doctors said my liver won’t be a perfect fit, even my wife’s too. Fortunately, one of my relatives has come forward to be a donor and his liver is suitable. The doctor said we shouldn’t wait any longer and must take him for the surgery as early as possible. But he can’t get a transplant until I pay for it. It costs around 19 lakhs and I don’t know how I am going to pay it within two days - Rajasekar

Rajasekar is a farmer who hasn’t done farming for four months now due to drought. He was running his family so far with the savings he had. He has another son who is just 2. Janaki's mom is taking care of him. He has no land of his own and does farming in the one that he had taken for lease.

"I don’t even have land to sell. I have borrowed some money from my friends and relatives but that is not enough even to pay for the medicines. I want to save my little boy’s life but arranging a huge amount like this in 2 days is beyond my capability" - Rajasekar

Ashwin is too young to die and deserves to live. But he can’t do it without your generous contribution. He needs an urgent transplant and you can make it happen. 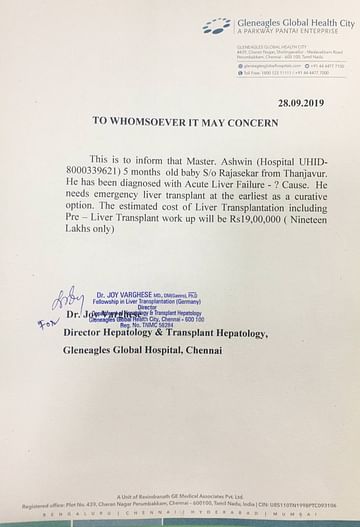 245 others have contributed
Click here to know more about Ashwin

A
Anonymous donated A$200

I deeply wish the baby gets well soon