Cancer Has Ravaged This 7-Year-Old Already, Any Further Delay Can Kill Him | Milaap
loans added to your basket
Total : 0
Pay Now

Cancer Has Ravaged This 7-Year-Old Already, Any Further Delay Can Kill Him

Shares
Shares
Share on whatsapp
If you would have met Arbaj six months ago, you would not be able to keep up with his energy and excitement. But now if you look at him, you won't be able to find the same kid in Arbaj anymore. He looks so frail and hardly smiles anymore. He used to always keep running around but now he always has to take a stand with him to even walk. At only 7 years of age, Arbaj is suffering from a severe form of blood cancer. His immunity has weakened so much that he keeps getting infections frequently making his condition even worse.


"It was my sister’-in-law's marriage and Arbaz was so happy to meet all his cousins. During that time, when he got unwell, we thought it must be due to all the fun and festivities.  But soon after he started having really high fever and always kept complaining of a stomach ache. He vomitted out everything he ate. Within a week when he went down from 19 kgs to 14 kgs, we started panicking. My husband rushed him to Kolkata from Bihar.” - Nasrin, mother.

They didn't tell me about Arbaj's cancer, but a mother always knows...

Mahfuz works as a tailor at a stitching shop and is able to take back home around Rs. 7000 to feed his family of six. His friends and relatives had helped him out with the initial tests and check-ups but now with the expenses piling up he does not have anyone left to help him out financially. Having exhausted everything he had, Mahfuz went back to his hometown to sell off his land and that was when Arbaz’s mother knew something was not right.


“ I could feel it in my heart that something was not right. I had not seen Arbaj for so many days and every time I asked my husband he used to tell me everything is okay. A mother always knows when there is something wrong with her child. But I could never even imagine that a day will come when my son will be fighting for his life due to cancer.”

Arbaz hardly eats anything now and has developed blisters all over his hands and legs. He is so weak and drowsy all the time due to the powerful medicines that his parents have to try to cheer him up by taking him to the hospital play area. Nasrin and Mahfuz have three more kids, They have not been able to give them any time and every time they talk to them they only ask us about Arbaj.

His parents have already lapsed so many chemotherapy appointments because now they do not have a single penny left. Arbaj has to be admitted again to the hospital for further treatment. It would cost them bout 8 more lakhs - the helpless parents know that they can never arrange for so much without help. You can be their ray of hope and help them bring their boy home.

Your kind support can save this boy's life 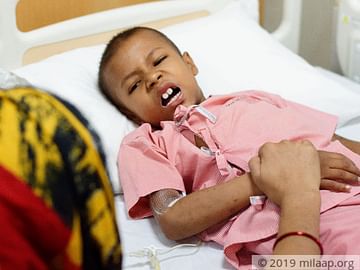 Arbaj Is In A Lot Of Pain, Deadly Cancer Is Making Him Weak With Every Passing Day

Arbaj needs funds for chemotherapy immediately, you can help