10-Year-Old With Severe Spinal Curvature Needs Surgery To Live Without Pain | Milaap
Receive tax benefits by donating to this cause. 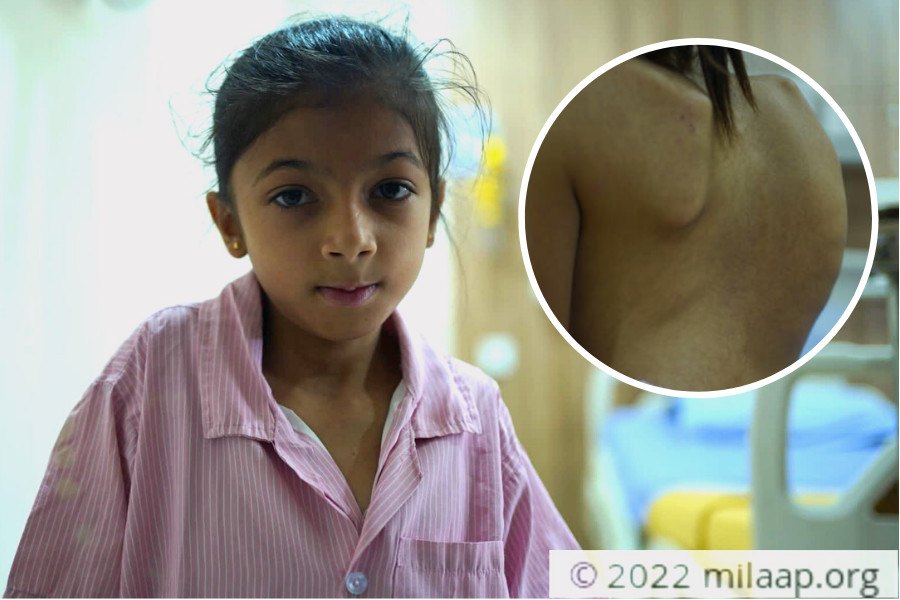 “We thought that with her initial surgery, our worries would be long gone. She was recovering so well and, in no time, she was back on her feet. We were so happy to see her toddling about. But even that didn’t last long… Within months, it was like she was back to square one… All her progress had just reversed.” - Chandrakala, mother

10-year-old Anushka is an avid dancer. She loves to break out into a dance, move her body to the rhythm of the music as best as she can, and give her parents a show to remember. But there is a limit to what she can do. Her movements are rather stiff and weak, due to a neuromuscular condition that has deprived her of the joys in life.

Her spine has curved, and protrudes from her back

Little Anushka was diagnosed with idiopathic scoliosis, a progressive condition that causes the spine to curve sideways. It can be disabling and a severe spinal curvature can reduce the amount of space in the chest, making it difficult for the lungs to function properly.

“As she started growing, we realised she was much slower in achieving some of her milestones - her motor functions for example. It was hard for her to stand or walk, even with support. Right after she turned 2 years old, we noticed how her spine had begun curving sideways and protruding from her back. That’s when we knew something was terribly wrong” - Sanjay, father

She underwent a major surgery as a toddler, but her progress was all in vain

The only treatment option that was available to Anushka was corrective surgery, which she underwent immediately. 15 days post-surgery, it seemed that Anushka was back in high spirits. She was able to walk again (upper-body wrapped in plaster and all), and her parents had been relieved that they wouldn’t have to watch their baby suffer anymore. But things took a turn for the worse, yet again.

“About 30 days after her surgery, her spine started curving again. We rushed her to a local hospital, but they ruled out the option of surgery because she was underweight. From then on, her health has been deteriorating rapidly. It has been 8 years, and her back looks much worse than before...It really upsets me to watch her suffer like this” - Sanjay

With no proper source of income, these parents are struggling to save their daughter.

Sanjay quit his job last year, to stay by his daughter's side. Since then, the family has been dependent on Chandrakala’s income as an Anganwadi (a rural childcare centre) worker. These parents have gone above and beyond their means to meet their daughter’s medical expenses. They’ve even borrowed from relatives and friends, but now they’ve exhausted all their resources.

“The doctors have told us that she needs this surgery as soon as possible, or it will reduce her chances of recovering properly and even stunt her height. She is receiving treatment to become of ideal weight, but there’s no way I can arrange for 8 lakh rupees for her surgery all on my own...” - Sanjay

“She sees other children in the neighborhood running about and playing, and she asks me when she can go out there too. She yearns to participate in dance competitions her school hosts, but she knows she can’t. It just breaks my heart to see her this way. I just want her to get better soon and be a normal kid again.” - Chandrakala

AS
Patient Anushka Sanjay Deshmukh is 10 years old, living in Nashik, Maharashtra
AM
Being treated in Ashoka Medicover, Nashik