Rice Mill Worker Is Struggling To Afford Rs. 2.5 Lakhs For His 7-year-old’s Chemotherapy

Chandrani and I have not been able to tell Anshu the truth. We said he is getting injections for his fever, to stop his fever from coming back. How can I explain cancer to a 7-year-old?

6 months ago, Anshu had a persistent high fever. Even after months, Anshu’s fever showed no signs of subsiding. Today, he is fighting cancer and his family is unable to continue with chemotherapy.

He had a fever for over 4 months

When Anshu’s fever showed up, Biswajit thought it was the weather. The family waited for a few days, gave him paracetamol. The fever did not subside. They took him to a doctor who prescribed medicines for viral fever.

“We were very worried so we got a second opinion. His blood tests came back normal. For months, we kept seeing several doctors who just said he was normal and there was no cause for his fever. Finally, one of them realized that his lymph nodes were swollen.”

The fever turned out to be blood cancer

The family was referred to a hospital in Kolkata. More tests and a biopsy revealed something they never thought they would hear. Anshu has Hodgkin’s Lymphoma – a rare form of blood cancer. The doctor in Kolkata suggested they seek treatment in Bangalore.

“We came here on 3rd October and admitted him to Manipal. He needed to start chemotherapy right away as the cancer is extremely aggressive.”

In just under few months, Anshu’s condition deteriorated. He was not eating well, could not even breathe sometimes. His stomach was swollen and hurt so much that he screamed. After the chemotherapy started, the side effects began taking a toll on him. He is tired, anemic, and is losing weight.

“He used to love school, playing with friends, and he would never stop talking. Now he barely talks. Even when he does, it is just to ask us to take him home. He does not even verbalize his pain sometimes. His screams were all we heard. Now, as the chemo is working, he has begun to smile. He is feeling better.”

The family is unable to pay for chemotherapy

The chemotherapy is improving Anshu’s condition. So far, he has completed 2 cycles, and it has helped him get a little stronger. He is even eating better. Biswajit (father) works at a rice mill for Rs. 7000/month. He put in all he had, borrowed from everyone and brought Rs. 80000 for the treatment when he came from Kolkata. Now, the money has been exhausted, and he does not have a single rupee to pay off the bills. The family is unable to continue with Anshu’s treatment.

“I am here now, and cannot go to work. I have even left my young daughter with my brother because I cannot even feed her. My wife and I are left with no other option but to beg for help. If we stop the treatment now, we will lose Anshu. We cannot go back home without our son.”

Anshu needs 6 cycles of chemotherapy. He has only completed 2 and his family does not have the means to pay the outstanding bill. The cost estimated for chemotherapy is Rs. 2.5 lakhs. Without this treatment, Anshu has the least chance of fighting cancer.

Your contribution will save this 7-year-old’s life.

The specifics of this case have been verified by the medical team at the concerned hospital. For any clarification on the treatment or associated costs, contact the campaign organizer or the medical team.
Click here to contribute to Anshu or for more details on this campaign.
Donate 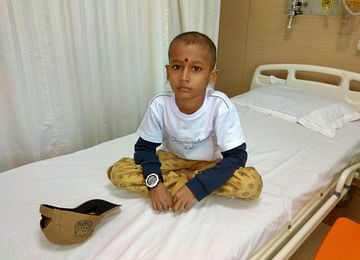 Anshu has blood cancer. His parents are unable to afford chemotherapy to keep him alive.