Shares
Shares
Share on whatsapp
9-year-old Anju has been fighting blood cancer for two months now. She is in and out of the hospital taking rigorous chemotherapy that will control her cancer. But even through treatment, she keeps asking her father if she will get better by March – in time to write her final exams. Her parents assure her that it is possible, but in reality they don't even know if they can afford her treatment.


Anju with her parents at the hospital

Anju is a bright, vivacious child waiting to go back to school

It was just a fever that led to such a terrible diagnosis. Anju had just recovered from dengue and her parents were worried that it might have come back. That was their biggest concern when Anju was admitted in the ICU. But the blood tests brought even worse news.

“Anju is one of those kids who seem to be involved in everything – almost like having many different lives. Anju is great at studying, always at the top in her school. She loves dancing and manages to participate in every programme here. She also takes part in school sports and athletics. For someone like her to have blood cancer feels unreal. We still can't believe it,” Anju's father Ram explains.

Anju with her mother and older sister Amrita (left)

Anju has acute lymphoblastic leukemia – a common blood cancer that grows rapidly and needs immediate treatment. She is undergoing chemotherapy and seems to be responding well. Because her condition is so critical she needs treatment for at least another 8 months.

But the treatment will be expensive and Anju's family is already struggling to pay off the existing medical bills. In just the last two weeks, the expenses came up to Rs 3 lakhs. Anju's father, does data entry for a small company and earns barely enough to take care of the family. The unexpected medical expenses have put him in deep debt to a lot of friends and family.


Despite her usual cheerful demeanour, Anju is growing noticeably weaker every day

“All we want now, is for Anju to get better and have a good, long life”

Anju' parents – Ram and Rinki, have not yet told her what she has. They try to keep her talking about school so she doesn't think too much about anything else. They fear that knowing the exact nature of her illness will only make Anju sad. More than anything else – staying hopeful is important while fighting cancer.

With everyone's focus on Anju's treatment, others at home are neglected. “Anju's little brother is just 15 months old. He is at the age when he wants our attention. He is uttering his first nonsense words expecting us to understand. But we have no time to give him because his sister is here at the hospital – fighting to live,” explains Ram.

Both Anju's parents come to the hospital, worried sick about Anju – who is growing weaker every day. Coming to the hospital has become their one hope – it is the way to save Anju. But it is also a reminder of how they might fail her if they don't manage to get her treatment.

Anju's parents have borrowed everything that they could have. They have knocked all doors that would have opened to help them. Now they are faced with the terrible prospect of abandoning their child's treatment because they don't have money. Ram and Rinki have never felt more helpless.

Contribute and provide a helping hand to these needy parents. 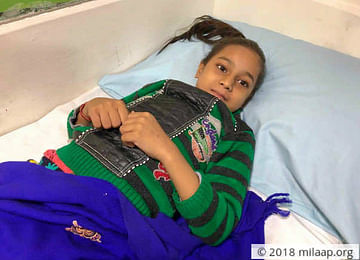 Anju needs chemotherapy to survive but her family has no resources left to save her.