5-Year-Old Anjali Slipped And Fell From The Terrace, She Won't Live Without Your Help | Milaap
loans added to your basket
Total : 0
Pay Now

DS
You are sending a message to
Dr. Supraja
Go back

5-Year-Old Anjali Slipped And Fell From The Terrace, She Won't Live Without Your Help

Shares
Shares
Share on whatsapp
Next Monday would have been Anjali’s first day of school. But look at how things turned out for this little girl– a regular day of playing with her neighbourhood friends has left her fighting for life in the ICU. She accidentally slipped from the terrace, a 15-foot fall. She has several fractures and severe bleeding in her brain. It’s been 6 days and Anjali still hasn’t opened her eyes.

“What if she never wakes up?” Lakshmi keeps asking Mallaiah, weeping uncontrollably.

Anjali’s mother, Lakshmi, ran out of the house to find her 5-year-old lying on the road, unconscious. The neighbourhood kids surrounded her, looking terrified. The only thought that ran through her mind – I was only gone for a minute, how can I let this happen to my child? Like any mother would be, Lakshmi was scared, heartbroken, but most of all she was determined to get her help.


“I picked her up and took her to the hospital in the first auto that I can find. My husband had already left for work. I called him on the way. When we reached the hospital, they immediately took her away from us – she was critical. It took so much of me to stay strong for those few hours, now I can’t any longer.” - Lakshmi, mother

Lakshmi blames herself. She cries uncontrollably and has even stopped eating. It’s been 5 days since her last meal. She says she will eat only when her Anjali wakes up. Anjali needs to stay in the ICU for longer to recover.

They sleep on the hospital floor, starve and even beg relatives for help – none of this is enough

The day of the fateful accident, Mallaiah had already left for work. Imagine his horror when his wife calls him to tell him that their daughter had fallen from the neighbour’s terrace. He dropped everything and rushed to the hospital. Mallaiah works in construction. His daily income is enough to get by. Now Mallaiah sleeps on the hospital floor, going to the ICU every half an hour to check on his little girl.

Before the terrible accident, Anjali was a playful, happy girl. Now her future is uncertain. Anjali needs to stay in the ICU longer to recover. The bleeding in her brain is severe, her injuries, fatal. Mallaiah and Lakshmi have no means to continue her treatment any longer. Anjali can make it with your help. 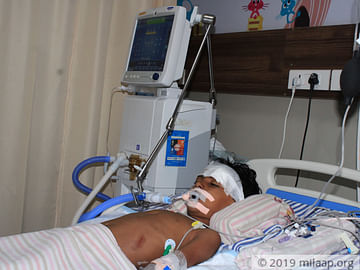 It's been 6 days since the terrible accident. Anjali needs to stay in the ICU longer to survive.