Medicines Have Failed Him And Only An Urgent Liver Transplant Will Save Little Anirudh's Life | Milaap
loans added to your basket
Total : 0
Pay Now 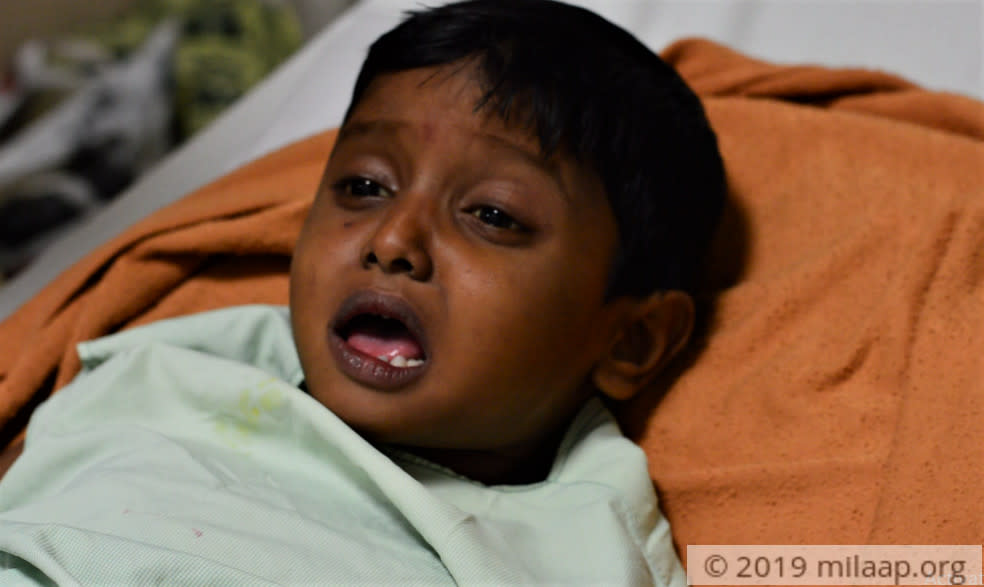 "Anirudh is scared of hospitals. He refused to get admitted for the surgery and we had to wait till he fell asleep to bring him here. After he woke up he started crying. He was angry and turned the other side on the bed and didn’t speak to me the whole day. I can’t blame him because for the past three years we have taken him to a number of hospitals. He is too little to understand that these medicines, injections and doctors are not hurting him but only trying to keep him alive." - Kalaiarasi, Mother

5-year-old Anirudh is a shy little boy and everyone’s darling at home. He had a normal happy life until he turned 2. He got a small lump on his head one day and within hours his eyes became yellow. Doctors thought it would be jaundice and treated him for it but it didn’t show any positive result. After taking him to a number of hospitals they at last found out that he has a rare liver disease which is progressing fast.

"It’s been three years since we found out about his disease and Anirudh was surviving only on those high dosages of medicines till now. But the medicines, they are only making him more tired. He has to take it before leaving to school and sleeps all the way in his van. Even his teachers started to complain that Anirudh is drowsy and is not listening in his class. Because of this disease, he is not even hungry. It’s sad to see him bring back his lunchbox untouched. He doesn’t eat or study or even play like before."

Teased for a bloated stomach, this little boy is scared of going  to school now

The kids in his class used to tease him for his bloated stomach. There are days when he refuses to go to school because of it. But for the past few months, it started to swell more.Two weeks back he started to pee frequently and even his teachers called me again, complaining about him going to the toilet often during the class hours. Within two days he got a high fever and became unconscious. The doctors said he needs a liver transplant. He said if we wait any longer we would be losing our child - Mother

Anirudh has PFIC, a liver disorder where the liver cells are less able to secrete a digestive fluid called bile. This buildup of bile in the liver can cause the liver to fail. This condition will get worse over time and only a liver transplant at the earliest can make him thrive. But the child’s parents are struggling to pay that huge some and they have only a few days left to undergo the surgery.

"The whole transplant will cost around 19 Lakhs. It is highly difficult for my husband to pay. He is a mechanic who makes around Rs. 15,000 per month. After admitting Anirudh in the hospital last week, my husband hasn't returned. He is busy trying to borrow money from everyone he knows. He wants to save our child at any cost now and has promised to return with the whole amount. But I know it would be difficult for him and he is struggling somewhere for it."

Your generous contribution can make Anirudh get surgery soon. He deserves to live and you can help save him

You are in my prayers, God bless you.

370 others have contributed
Click here to know more about Anirudh

Donated to this campaign via Bank transfer/QR Code? Click here if you can’t find your donation listed below.
A
Anonymous donated Rs.15,000

You are in my prayers, God bless you.

God bless you and get well soon.

God Bless this child with good health and long life.