Unaware That Her Brother Is No More, She Battles Cancer Thinking He's Waiting For Her At Home | Milaap
loans added to your basket
Total : 0
Pay Now

Unaware That Her Brother Is No More, She Battles Cancer Thinking He's Waiting For Her At Home

“I don’t know how many more things I have to mourn now? It feels like a never-ending storm that has taken away my son and daughter in its wrap. I had not even cried my heart out on my son’s death and now my daughter is dying of blood cancer. My daughter, Aliva, doesn't even know her brother is no more. She still thinks he is waiting for us at our village. I keep crying helplessly, I don’t know how to save my family now?”- Pragya, mother

A mysterious disease took away their son and now Aliva is fighting cancer again...

Within a span of 4 years, Ashok and Pragya have lost every happiness they had. First, their daughter got detected with cancer in 2016. Just few months back they got the good news that Aliva was cured of cancer. Just when they felt their miseries have ended, they suddenly lost their 6-year old son overnight without any time for them to take him to the hospital. They still don’t know the exact reason of what happened to their perfectly healthy boy, the doctors told them it could have been some kind of sepsis.

Soon after, Aliva had a relapse and this time the doctors have told them that she won't survive without a bone marrow transplant. But the cost of this transplant is 45 lakhs, an amount way beyond their capacity.

There was blood all over 7-year old Aliva’s face

“It was nothing less of horror when I came back home from the office and saw Aliva bleeding from her gums, nose and ears. Blood transfusions didn't help. She kept feeling dizzy and seemed tired all the time. We were told to a bigger hospital immediately. Tests showed us that she has blood cancer! She was immediately taken for oral chemotherapy...” - Ashok, father

With Aliva’s treatment cost increasing each day, Ashok and Pragya had no option but to move to a rented room

“I used to earn decently, that is why I could afford Aliva’s treatment of about 20 lakhs earlier. Everything got over by 2018 but I had no complaints because Aliva had recovered. I have not been able to go to work regularly since June and I’m at a risk of losing my job. I don't have the time left to get 45 lakhs more. Even after borrowing money from every person I know I could only manage about 5 to 6 lakhs. Now after losing my son, if we lose Aliva also to cancer, Pragya and I will not have anything left to live for…” - Ashok, father

They waited so long for a matching donor, but now they don’t have the means to get the transplant done

“With my son Anshuman, I didn't even get a chance to save him. I will always have this regret that maybe if I was not in Kolkata for Aliva’s treatment, I could have spent more time with him. But I couldn’t be there for both my kids at their critical moments. But with Aliva the only way I can save her is by getting 45 lakhs somehow. I know this is impossible for me alone but how can I lose even one chance I have to save my baby girl just because of money?” - Pragya, mother

Aliva with her brother, Anshuman, who is no more

Even after Aliva undergoing chemotherapy sessions, she not only gave her exams this year but also came in the merit list among Top 5 in the Odisha District exams. It's been a while since Aliva has smiled. She doesn't even know her brother is no more. She still thinks he is waiting for her at their grandparents home. All we can do to help her is contribute so that this time she can beat cancer once and for all. 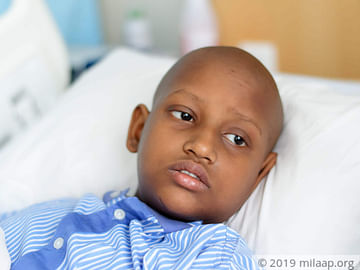 A Mysterious Took Away Their Son, Now Their Daughter Is Fighting Cancer

They have done everything they could yet they can't save her, you can help