I'm Afraid That Even Hugging My Own Son Can Hurt Him Because Of His Cancer | Milaap
loans added to your basket
Total : 0
Pay Now

“Everyone in our neighbourhood in Hyderabad loves Akshar, and he too loves being around them. He was hardly at home, always playing at a neighbour’s house or the nearby park. Our son was so happy and active, and got along with everyone. But now he doesn’t allow anyone to even come near him. He doesn’t even let me carry him because even my touch can cause him pain. Cancer has made him so weak. He’s crying all the time. I long to see him smile again, but he has a difficult fight ahead of him.” – Jyoti, Mother of 2-year-old Akshar.

I'm afraid to even hug him fearing that I'll hurt him

Last October, Akshar had a high fever that did not subside for many weeks. Jyoti and Veeresham took him to many hospitals, he was prescribed medicines everywhere but it did not help him. In January, they found that he has fluid accumulation and a tumor in his brain through an MRI scan. He had an urgent surgery. The tumor in his brain was removed but tragically within 4 days, he was diagnosed with cancerous tumor in his bones. The tumour is aggressive, rare. He suffered through multiple chemo cycles which have made him extremely weak with no energy to even sit up on his own.


"We cannot even carry him, he has unbearable body pain. When I put him down to sleep, within 5 minutes he wakes up startled and screams. He has forgotten to smile, he cries all the time, no matter how much I try to distract him.  He cannot eat anything. He begs me to stop the injections but I watch him suffer helplessly." - Jyoti, mother

His father hasn't taken a day off from work, but still can't afford his treatment

Akshar is unable to continue with his chemo cycles because the fluid in his brain has accumulated again. He needs a VP shunt, a device that relieves pressure on the brain to continue with the chemo cycles. However, Veeresham cannot afford it. He works in a Max retail shop and earns Rs 11, 000  per month. For the first surgery, he sold his small piece of land for 6 lakh and managed the expense. After which he could not afford to take even a day off from work. Unfortunately, his income is not enough even to buy his medicines. He needs 3 lakh for the treatment and is desperately waiting for your help.

"My husband works overtime on all the days of the week and with the little time he gets, he runs to everyone he knows for help. Our neighbours have helped us as much as they could, now I don't know what more we can do to save his life. Please help us." - Jyoti. 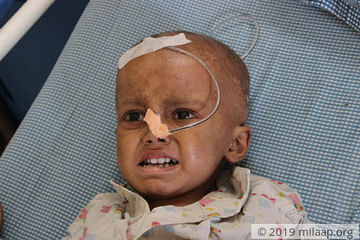 He Screams In Pain All The Time Because Of Cancer

His parents need your help to continue the treatment and save his life.