Sudheer sold off his farm and home to save his child from liver failure, but it is not enough | Milaap
loans added to your basket
Total : 0
Pay Now

Sudheer sold off his farm and home to save his child from liver failure, but it is not enough

Shares
Shares
Share on whatsapp
Sudheer's 2-year-old son Akhilesh has a rare illness that has caused liver damage. Since he turned two last month, Akhilesh's conditon is getting worse. He needs a liver transplant at the soonest. Sudheer has tried all possible avenues and failed to raise funds to save Akhilesh.

Without treatment, Akhilesh may not live till he learns to speak

Akhilesh has just started speaking his first words. Unable to speak the full word, he uses the first sound of the word to express that word. 'Daddy' becomes 'Da'. With his health worsening, his parents wonder if it will be too late by the time their baby is actually able to say his first full words.

“Akhilesh wakes up and the morning and the first thing he does is cry. He keeps crying till we give him some food. After eating food, for the rest of the day, he has loose-motions. Seeing my small son lose all his food and water this way stabs at my heart,” says an emotional Sudheer.

Sudheer and his wife Akhila now live in a constant state of despair. Last year, they found out that both their children had a condition called Glycogen Storage Disese. This condition – if not controlled, destroys the liver and weakens muscles. Sudheer and Akhila are managing their children's health through a strict diet and medications.

While their 3-year-old daughter Rithu is doing a little better since the dieting, 2-year-old Akhilesh's condition deteriorated rapidly. The doctors have warned Sudheer to expect the worse if Akhilesh does not get a liver transplant soon. Sudheer is now in his village in Warrangal trying to arrange for funds.

With both his really young children falling prey to this condition, Sudheer is heartbroken. Both Rithu and Akhilesh needs a liver transplant. Only, Akhilesh's condition is much worse than Rithu. Unable to fund even one transplant, Sudheer feels like he is trapped in a hopeless situation.

Even at 3, Rithu is protective of Akhilesh, she knows he is very sick

It doesn't help that Akhilesh is too young to understand. “Both children are supposed to be on a strict diet. Rithu understands, but Akhilesh cries, and even bashes his head on the wall – refusing to eat the food we cook for him. In the end, we have to feed him just a little of the food he demands – just so he agrees to eat. We try, but we can't force him. He is in enough pain,” Sudheer says.

Sudheer has sold off all their gold and their small piece of land he had hoped to leave to his children one day. He managed to put together Rs 5 lakhs – the rest he paid for through loans. For Akhilesh's liver tranaplant – he needs Rs 16 lakhs. As days go by and he cant get a loan, Sudheer is becoming desperate.

In their sorrow, Akhila is the one staying strong and making sure that they keep trying to arrange for funds. She is being the rock on whom the whole family is now dependent. But even her strength cannot bear the lost of her young child who hasn't even learn to speak his first words.

Sudheer is a bank agent and the sole breadwinner of the family. When he works for a whole month, he earns Rs 10,000  every month. Arranging this large an amount is simply impossible for him. Your contribution will help him save his child. 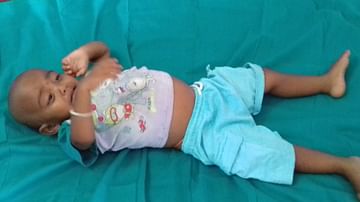 Akhilesh is too young to understand that he is sick. A liver transplant will save his life.