His Heart Stopped Once Before, And It Can Happen Again | Milaap

His Heart Stopped Once Before, And It Can Happen Again Without An Urgent Surgery 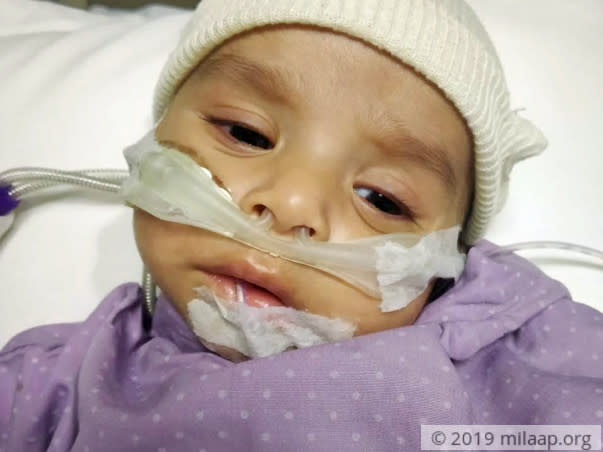 Share
“His heartbeat stopped 4 to 5 times, and I had a glimpse of what it would be like if I lost him. I couldn’t take it. I was devastated, and afraid. Every time his heartbeat stopped, I could sense mine thumping. Because it could have been how it all ended. The ambiguity and the waiting killed me. But just when I thought he was slowly recovering, my worst nightmares came true…”
– Simran, mother

Just three months after he was born, Ahaan's hands and legs turned a deep violet

With the pregnancy having gone smoothly, and the delivery being normal, Sakir and Simran had nothing to worry about. But three months later, things began to change. One day, Baby Ahaan started wailing unceasingly. Just minutes later, his hands and legs turned a deep violet and Simran had the fright of her life. With her husband being away on work that time, Simran was left to deal with the situation all by herself.

“When I took him to the clinic, only the compounder was there. Because the baby was struggling to breathe, he suggested we nebulize him till he gets better and then take him to a bigger hospital. I was all alone, and I was glad somebody could make decisions. After that, I rushed him to the biggest hospital I knew and got him admitted…” – Simran, mother.

He struggled to breathe and he was put on ventilator support...but it did not help

Ahaan suffered from breathlessness and his body had turned blue due to the lack of oxygen. The doctors immediately admitted him in the PICU and he was put on ventilator support. He caught a severe infection, and his organs were affected – his kidneys, liver and lungs. He was getting weaker and hadn’t urinated in two days. The doctors suggested a dialysis was a must, if they were to save the baby. However, just hours before the dialysis, Ahaan urinated and the procedure was called off.

“I thought his sufferings were finally going to end. But I was so wrong!" – Simran.

During one of his check-ups, little Ahaan was diagnosed with Ventricular Septal Defect (VSD) – A hole in the wall between the heart’s chambers that leads to the mixing of the pure blood, with the impure blood. If left untreated, they might lose Ahaan.

“I was shocked when I was told he had a hole in his heart. I don’t think any 4-month-old baby can suffer more than this. He’s seen it all – tubes inserted, and injections pricked and now, this. My baby is struggling to breathe. The only solution to this is an immediate open-heart surgery. As much as I dread a major surgery on my little boy, it’s the only way left to save him. But, it will cost 3.2 lakh rupees… where are we going to get it from?” – Simran.

With his savings all exhausted, Sakir can’t afford his son’s surgery

Sakir works as a police constable and earns a decent amount, to lead a normal life. However, ever since the delivery, all of his savings have been spent on the child’s treatment and he has nothing left. Having borrowed funds from every relative and friend, he has no other source of help.

“Till now I’ve spent 7 lakhs on his treatment. I don’t know how I managed that, but by God’s grace, I did. But now, I have nowhere to borrow money from. We are aching to put an end to all his sufferings by getting this surgery done, but I really can’t afford it. My son’s life depends on me and I’m afraid I’m going to let him down…” – Sakir Khan.

They have done all they can to save their only child, and they're helpless. Your generous contribution can help save Baby Ahaan.