Her Body Itches So Much That She Rubs It Against A Wall, A Liver Disease Is Killing Her | Milaap
loans added to your basket
Total : 0
Pay Now

Her Body Itches So Much That She Rubs It Against A Wall, A Liver Disease Is Killing Her 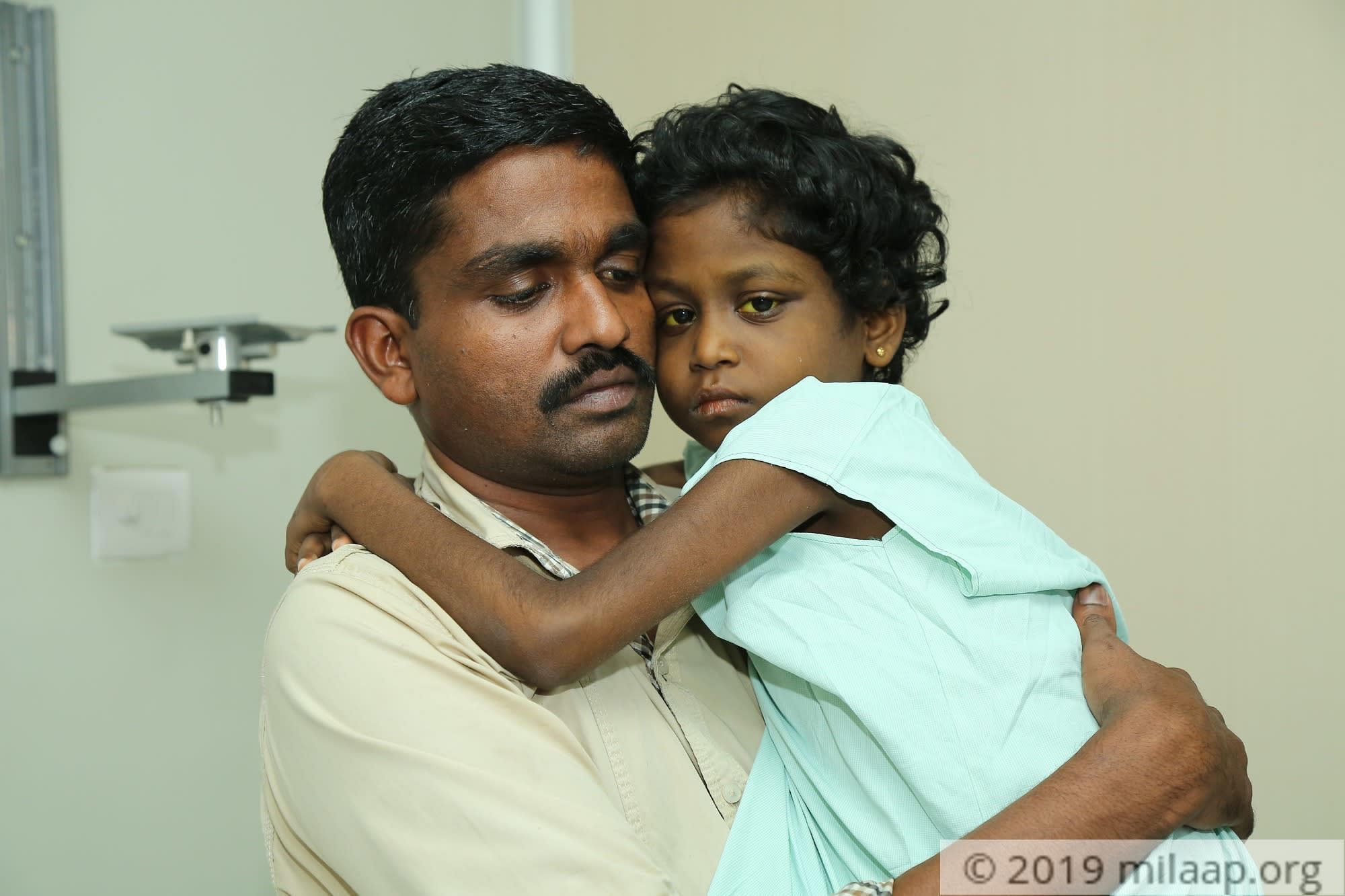 It was her liver that was causing her problem, now her heart. Doctors say that her other organs too might fail soon if she doesn’t get a liver transplant within a week. We have only 7 days left to save my little daughter and I need lakhs for it. How will I pay that much amount for her surgery when I don’t have money even to buy the next meal for my family? – Jayanti, mother.

8-year-old Abinaya’s struggle started when she was four years old. It was just a fever and the next day the temperature surged, with her skin and eyes turning yellow in colour. Her parents rushed her to the hospital where she was diagnosed with jaundice. Doctors told medicines could cure her but she had to continue it for four years citing problems with her liver. She was limping back to normalcy until her condition got worse two months back.

Her skin was itching so bad that she was rubbing herself on the wall, pleading for help

Abi woke up one night crying out loud, scratching her body so much that there were marks all over her arms and legs. Her parents thought she is having a nightmare and tried to pacify her.

But we got really scared when she started rubbing herself on the wall and pleading us to do something. We took her to the hospital immediately and she became calm only after they gave her medicines. After many tests and check-ups, doctors found out that her liver is damaged. Her heart has problems due to improper blood into the lungs - Jayanti, mother

What Abinaya has is an end-stage liver disease called Alagille syndrome. It’s a genetic disease where the bile from the liver builds up, causing scarring and prevents it from working properly. Due to this, the organ doesn’t eliminate wastes from the bloodstream causing further problems to the lungs and heart. She may soon have multiple-organ failure if not treated early.

They have no one to help them or take care of their little son when we are here with Abinaya in the hospital. She missed this year at school due to her condition and now her brother too will drop out if the parents can't arrange the surgery in time and go back home.

"He loves his sister so much that he doesn’t mind skipping his school which is his favourite place. It is so painful to seem them losing their future because of this damned disease. But they both are strong. Abi cheers up whenever she sees her brother. They both are confident that they will go home soon after the surgery. But they don’t know that their father who is their hero doesn’t even have money left to feed them for the next day," - Viji, father.

Viji works as a mason in his village for a daily wage of Rs.300. It’s been two months since he went for work due to Abinaya’s illness. He is an orphan and none of his or his wife’s relatives is talking to them, fearing he would request them to lend money for his daughter’s treatment. He has borrowed some from his employer and pawned Jayanti’s jewels to get Abinaya admitted in the hospital and buy medicines. But that money is slowly getting over.


"I have no options left and time is running out. Where will I go…whom will I ask for such a huge amount? I haven’t even seen a lakh in my life. Me, my wife and little son have nothing left in us other than hope," - Viji

This struggling family needs your help. Your generous contribution can save a little girl’s life and bring hope and joy to them.