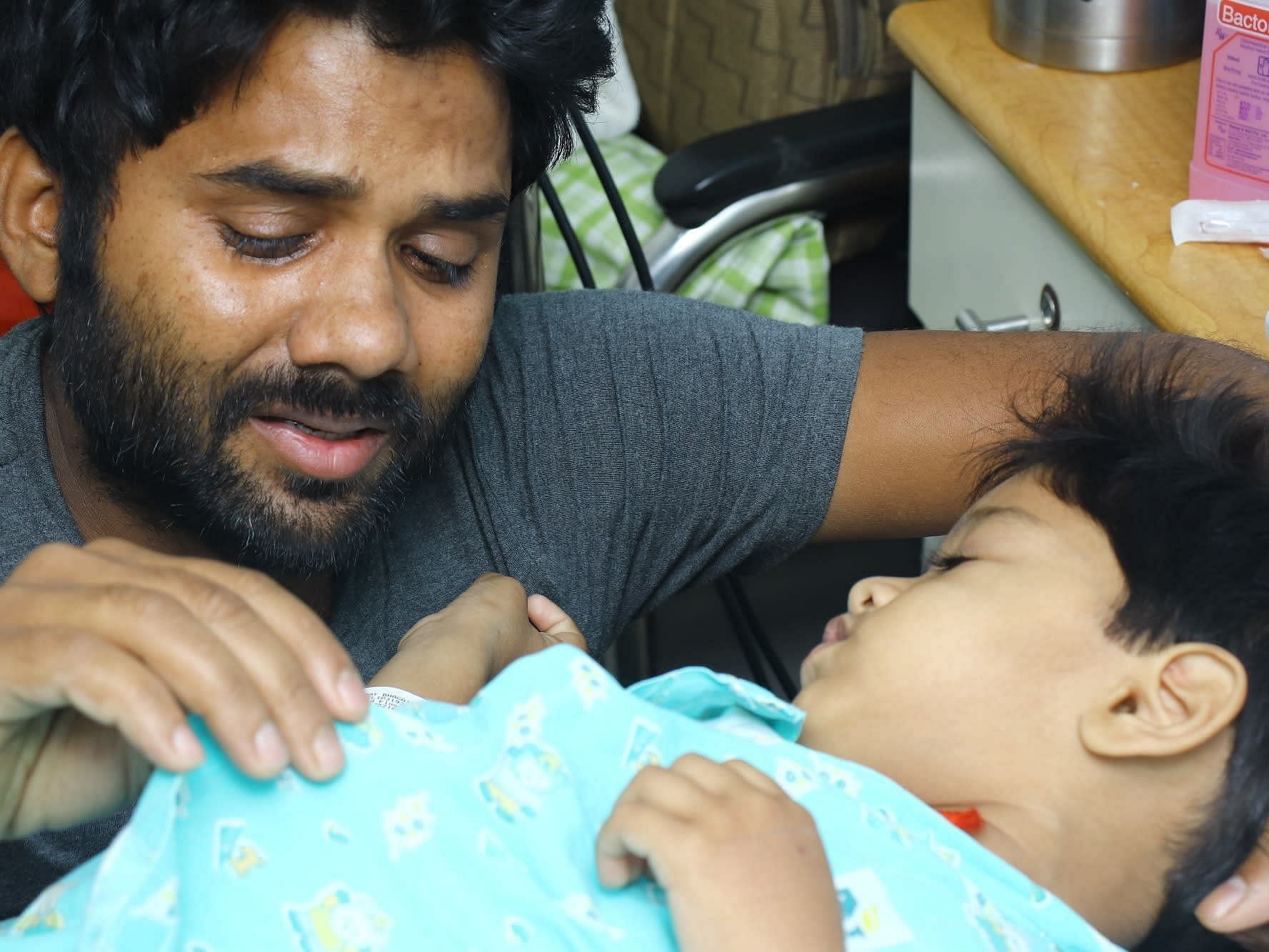 "He’s my best friend. Before all this, we were inseparable. From the moment he woke up, to the moment he fell asleep on my chest watching Chhota Bheem, we were together. Even now we’re still together all the time, except... except now we're in a hospital, and Aashu is dying of cancer!
Before, the first thing out of his mouth in the morning used to be ‘Let’s play, papa!’. Now he asks me how much longer he’ll be sick, he asks me why I’m not making the pain go away like I always do when he gets hurt!"
— Anand, Aashray's father 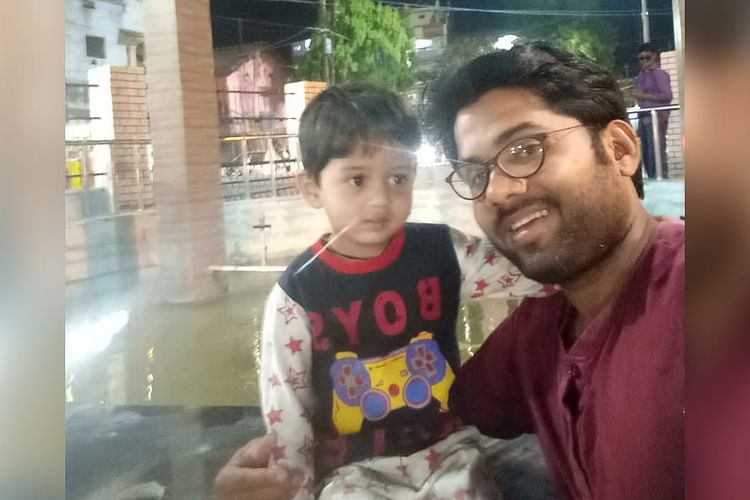 3-year-old Aashray had never really fallen sick since his birth, so when he developed a fever in late October, after which he slowly started losing his appetite, Anand and Bhumi had been concerned, and taken him to a local clinic.

“We went to many more after that first place. For a month or so we tried all the medicines they all prescribed, we followed all their instructions. But Aashu seemed to be getting even weaker than before. After some worrisome blood reports, we took him to Nagpur. That’s where we found out that... that Aashu has blood cancer! We had to rush him to Delhi.” 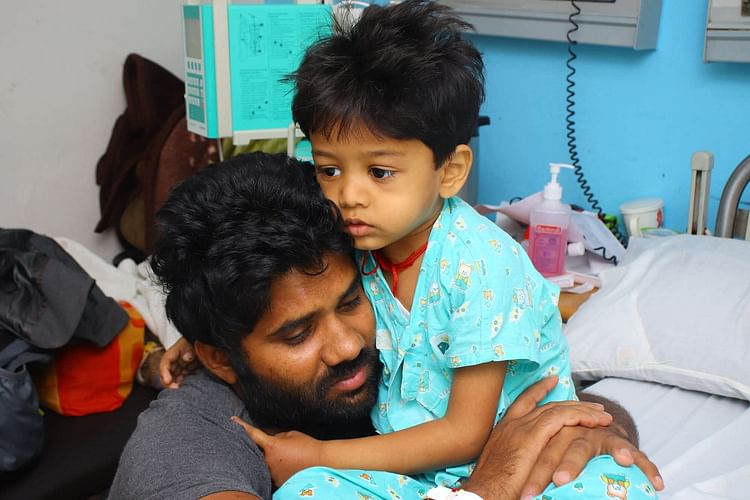 They simply can’t afford his treatment in time

“Once we got here, Aashray was immediately hospitalized. They confirmed what the doctor in Nagpur had said, doing some kind of procedure where they stuck a huge needle into his bone and pulled some fluid out. Our Aashu has... he has blood cancer. He needs urgent chemotherapy, followed by a bone marrow transplant, to survive. That’s the only way, apparently; the cancer is too advanced for anything else! He’s running out of time, but the cost...”

Aashray’s death isn’t inevitable. He can recover from this. However, the cost of treatment is beyond anything Anand or Bhumi could ever arrange, even if they had years to do so — they only have days. 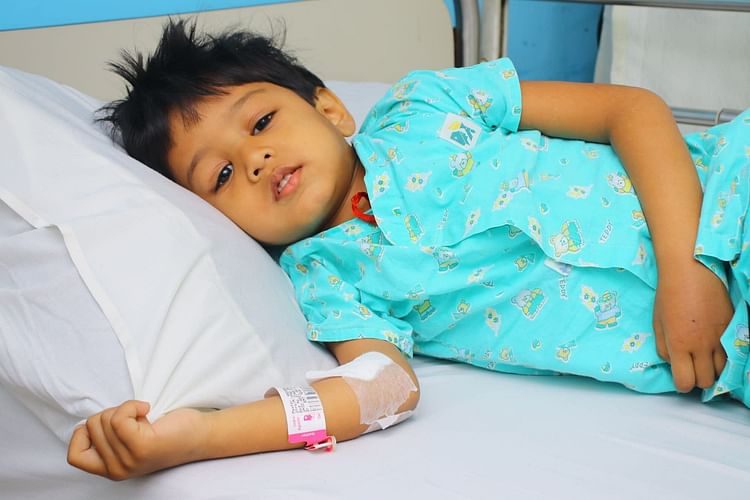 He's had 5 transfusions in 5 days; this little one will die without your help

Aashray’s condition is deteriorating. He has become deathly prone to infections, and his skin is getting paler and paler because his body can’t produce enough healthy blood anymore. He has needed 5 transfusions over the past 5 days, each one buying him just another 24 hours of life. Soon he’ll start having trouble breathing, and not long after that... 3-year-old Aashray will be no more. Though he’s smaller and frailer than ever before, if such a day came to pass, the size of the hole he would leave behind in his parents’ hearts would eclipse their lives forever. 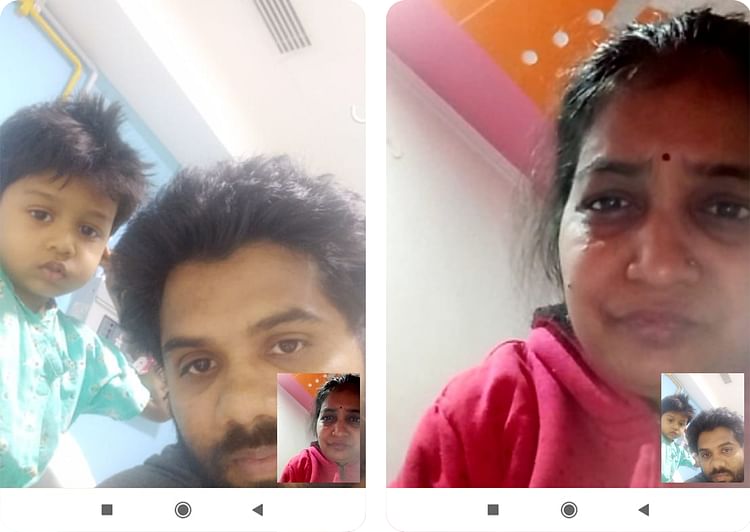 It would be a cruel twist of fate for Anand and Bhumi to lose one child right as they’re gaining one. You can help prevent such a tragedy, by donating as much as you can.
Click here to donate, and save Aashray’s life.
A
Patient Aashray is 3 years old, living in New Delhi, Delhi
AH
Being treated in Apollo Hospitals, New Delhi, Delhi