17-Year-Old Aakash Has The Mind Of A 1-Year-Old, And Needs Your Help To Get Better | Milaap
loans added to your basket
Total : 0
Pay Now

A
You are sending a message to
Amol
Go back

17-Year-Old Aakash Has The Mind Of A 1-Year-Old, And Needs Your Help To Get Better

He is on bedrest. He sits and lies down- and does not speak. He sleeps a lot as well and does not have any hobbies or friends to play with. His parents take care of all his activities. Due to his condition, Aakash also suffers from sudden fits.

This is offered by doctors at Mumbai’s Neurogen Brain and Spine Hospital. The treatment protocol involves a six days hospital stay during which time he will be extensively evaluated clinically. This will be followed by a Bone Marrow Aspiration from which subsequently the mononuclear cells are isolated.

This is followed by 4 days of intensive Physiotherapy, Occupational Therapy, Speech Therapy, Counseling and other medical treatment as required. Doctors are hopeful that with this therapy, his brain function can improve.

"We see him- 17 years old, but still like a child. He cannot do anything on his own. I have to even help him with eating."- Rajashri

Aakash’s legs and hand joints and bones are totally de-shaped due to no joint movement like normal human being. That can be re-structured after stage -1 (NRRT) operation and its incremental response.

Orthopedic surgeons have claimed if his brain starts working and started controlling, commanding and balancing him after stage-1 (NRRT) treatment, then he can stand on his legs after re-structuring of bones and hopefully he can walk also.

"Now he has the chance to get better. My son will not recover completely, but the doctors say that he can atleast function on his own. How can I not take the chance?"- Rajashri

The treatment is estimated to cost over Rs 3 lakhs, including the pre-therapy tests to be performed. Ramachandra and Rajshri have exhausted all their savings trying to get Aakash diagnosed. They cannot afford the treatment for their son. Doctors have said that the treatment can start immediately after the funds are arranged.


His parents have seen him struggling for 17 years, and are looking forward to bettering his health. Your contribution can help improve Aakash’s condition.

Medical Documents:
The specifics of this case have been verified by the medical team at the concerned hospital. For any clarification on the treatment or associated costs, contact the campaign organizer or the medical team. 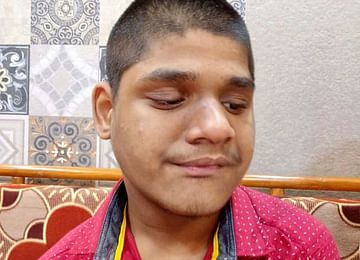 He has the mind of a 1-year-old. This therapy can help his condition improve