Shares
Shares
Share on whatsapp
12-year-old Farhan lost his arm when he has just  5 years old. Now he is in danger of losing his leg. His belongs to a poor family and his family is struggling to continue his treatment.

It was a bright morning. 5-year-old Farhan and his cousin were playing outside their house. Suddenly, they had a thought. They stopped their play and walked towards the road. Perhaps, if Farhan’s parents knew that their child’s life will change that day, they would have never let him away from their sight.
The small shop around the corner was the goal. The sweet, round candies stored in glass jars, Farhan's mouth watered. They walked as fast as they could. They would have hardly taken few steps when a speeding truck hit Farhan from behind, he fell and lorry ran over his right arm.
Farhan rolled on the road in pain. His cousin stood in horror. When Farhan opened his eyes in the hospital, he felt something missing in his body. The little boy could not bear the pain but he moved his eyes to the right, his right arm was missing. Tears rolled down his eyes. No one knows if the 5-year-old knew what this meant but his tears never stopped flowing. His mother, Jameela, was inconsolable. No one could answer this grieving mother’s questions “He is my little son, I watched his tiny arms and legs grow, he used to grab my face and plant a sweet kiss, where are the tiny fingers used to hold his favourite candy? His tiny fingers used to pick a handful of rice and feed me at times, will I ever see this again?” 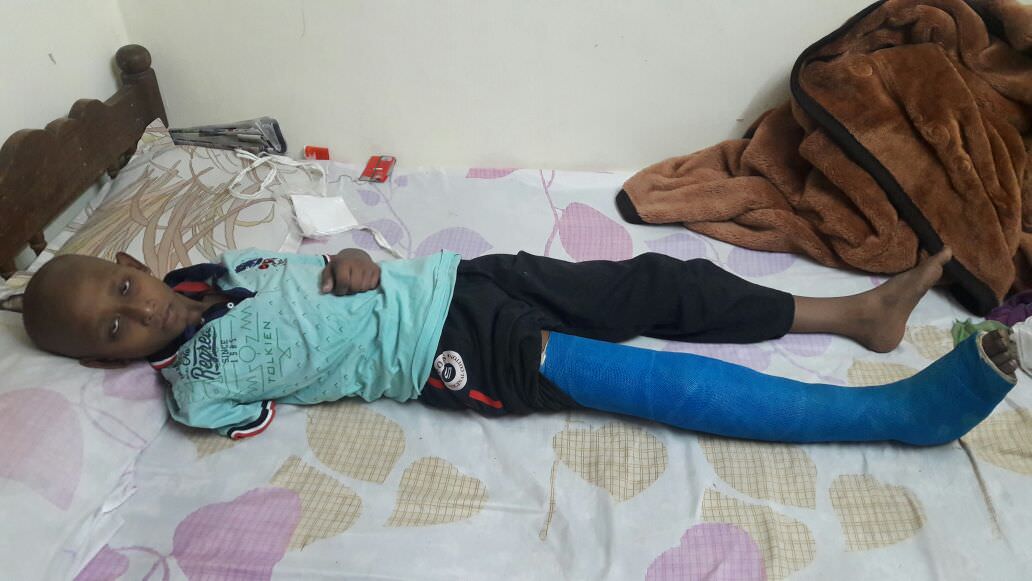 Little Farhan grew up as the boy with one arm in his village in Shimoga, Karnataka. The older kids making fun of him. Some felt he was not fit to do any activities. But these insults made him stronger, he decided that he will not depend on anyone. Farhan’s father, Rehman, sent him to Bangalore in the hope that he will receive a good education. Farhan stayed at his aunt’s house. At school, he spent most time alone. He loved playing and participated in most activities. Back in his village, his parents were always anxious. Jameela, used to wake up terrified from sleep at nights. “I get this bad dream always. I see my son in some danger. I still haven’t recovered from the fact that my little Farhan has lost his arm. Which mother can live happily knowing this? I wanted him back soon in my arms, so I told his father to bring him back”.
Rehman brought his son back to his village. But this time, they were in for another shock. 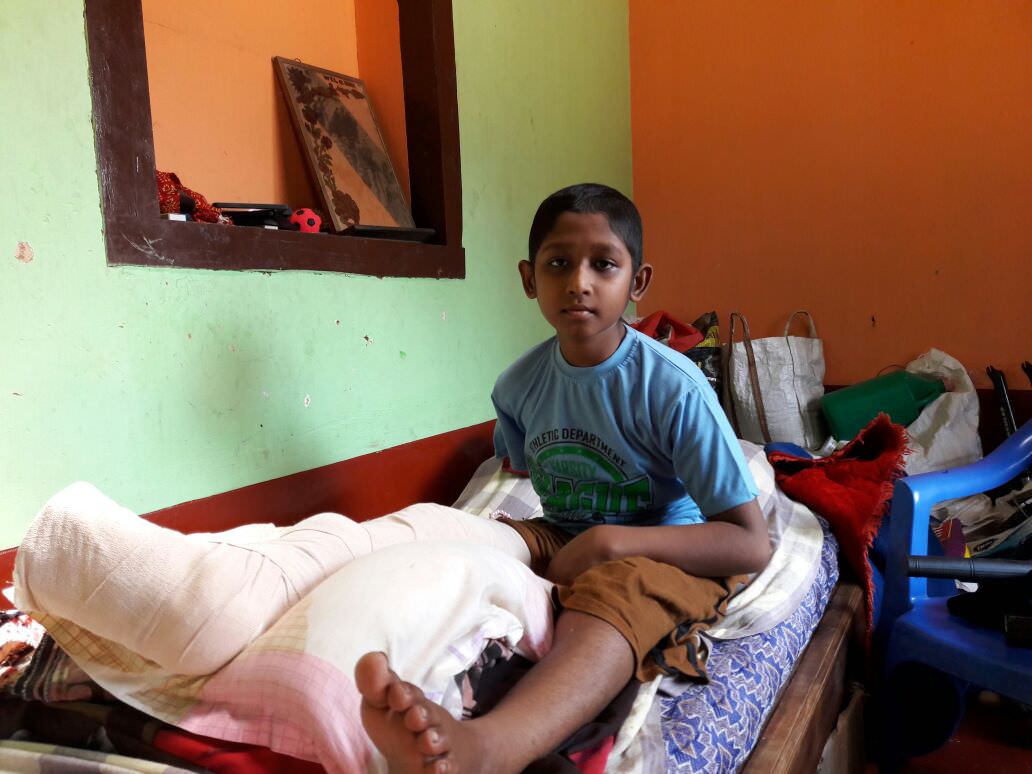 He Is In Danger of Losing His Leg to Cancer

Farhan was in for another tragedy. He complained of pain in his right left often. His aunt and others thought this must be because he runs around always. But even when he went back to his village, he complained of severe pain. “It became unbearable that my son couldn’t walk. He was going to class 6 but because of this pain, we took him back to our village” Farhan was taken to a bone specialist in HCG hospital, Bangalore. Rehman and Jameela broke down when the reports came. They didn’t why her son’s suffering has not ended. Unlike before, Farhan clearly knew what the doctor meant. He is 12 and understood that he has cancer. 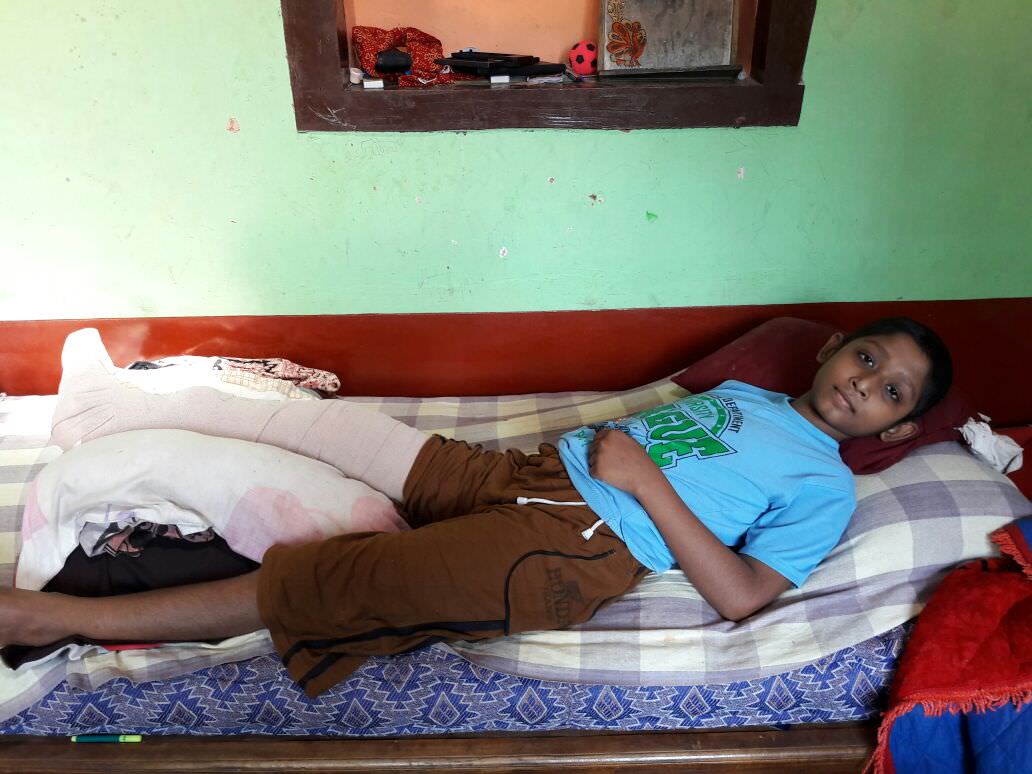 Farhan is suffering from osteosarcoma, a form of bone cancer. He underwent a surgery last year and was on chemotherapy. Farhan’s family stopped his chemotherapy when they ran out of funds to pay for the bill. The last time, Farhan came to visit the hospital, his doctor saw that Farhan’s hair has grown back. “ I noticed that he had hair on his head, this means that he has skipped chemo. "A Patient loses hair when he undergoes chemo. I was shocked. Farhan was showing a lot of progress and we were trying to save his leg and treat his cancer but the family stopped treatment”, says Farhan’s doctor.   He enquired with the family who informed that they had no choice to stop treatment because of lack of funds. Farhan is now back home with his parents with the hope that they will receive some support and can continue his treatment.

Farhan has been through a lot a pain since he was 5 years old. He came out of the first tragedy that took his arm and was leading a normal life but the news of cancer is pushing him back to the days of depression and pain. Our support can help this child in this crucial time. Fate took his arm but there is a chance to save his leg now. Fund raised through this campaign will go towards the hospital to settle his medical bills.
Click here to help save Farhan