Shares
Shares
Share on whatsapp
When I went to interview this particular Borrower Group, nearly all of the members, including Group Leader Kajal Mandal, were not available for an interview. However, one of the members, Sunita Mandal, was present. She provided us with an interesting story on how a solar-powered lamp has impact her life.
In rural West Bengal, Sunita and her neighbours have borrowed loans from Milaap to acquire solar-powered lamps. She makes ends meet as a self-employed beedi maker in order to financially support her 2 daughters. Her husband also financially assists by manufacturing colour prints for textiles. She works from 10am to 8pm every day.
Until recently, she had no major complaints with her work until sunset, when she usually endured electric power cuts. Post sunset, the darkness forced her to discontinue with her work. She did her best to work under such conditions by using a kerosene lamp; yet even its dim lighting was inadequate for her to persevere with her nightly duties.
Her lady neighbours were also facing similar problems in their lives. They realised that by borrowing loans from Milaap, they could buy solar-powered lanterns, which they believed would rectify their problems. All of them have been very satisfied with results. In Sunita’s case, she has been able to light her home at night with her solar-powered lamp. This has enabled her to carry out her work at night feasibly, irrespective of the power cuts. She is able to produce and sell more beedis. Consequently, she now earns an extra Rs. 200 per month- thanks to a Milaap-financed solar-powered lantern. 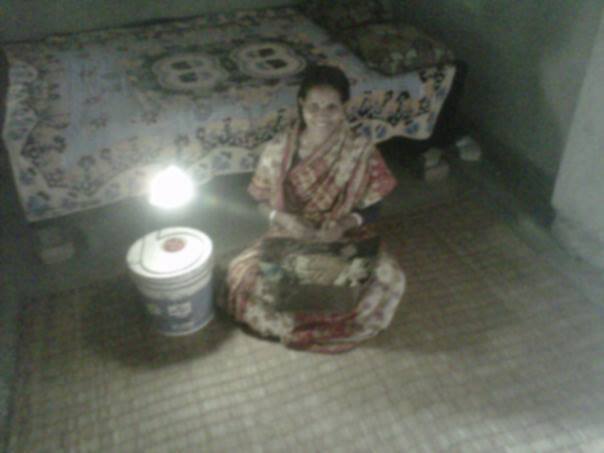 "I used to not be able to work after sunset until I got this lantern." - Sunita