Embroidery: Amariben’s art that brought light to her life | Milaap

Embroidery: Amariben’s art that brought light to her life

After travelling for almost five long hours, I had finally reached Bhachau, a small town in the district of Kutch. The sun was so intense that day that it seemed as if I had stepped into a blast furnace. I was all geared up and excited to meet my first borrower in this small town. Small would be an apt word to describe it considering the town has exactly one garden, one temple, and one English medium school.

Here, I was accompanied by my staff members, who were all in pretty high spirits. The relentless heat didn’t seem to bother them at all. I was here to check on the progress of Rajbai Mahila Mandal, a Joint Liability Group, being led by Vimalaben, after they had had been provided with the necessary funds from the Milaap community of lenders for growing their respective microenterprises. Vimalaben was too occupied with work that day, so instead of her, I met one of the other members of the group.
Amariben, an entrepreneur and a mother of a beautiful three-year-old son Rohit warmly welcomed me into her house. She gave me a coy smile as I stepped inside. This industrious woman has been running her business of embroidery for four years now. Embroidery is an art that she learnt from her mother, something that she herself loves doing. One glance at those beautiful yet intricate designs that she had made, and I was simply in awe of it.

Before being a business woman, Amariben was a housewife. And the household income was so low that she could barely save a meager sum of Rs. 600. It was then that she decided that she needs to do something on her own, one which will help her in supplementing her family income. An art that she had learnt long time back proved to be efficacious for her. Now, her business helps her in earning a monthly income of Rs. 4000 to Rs. 5000.

“I myself couldn’t go to school, but my son deserves the best of education. And I am doing this for him,” she looked at his son with a lot of affection as she uttered the words.

But she admitted that she had utilized her loan from Milaap to repair her house, one that was of utmost priority to her at that moment. I am hopeful that Amariben will use her loan for the intended purpose next time that she borrows one. 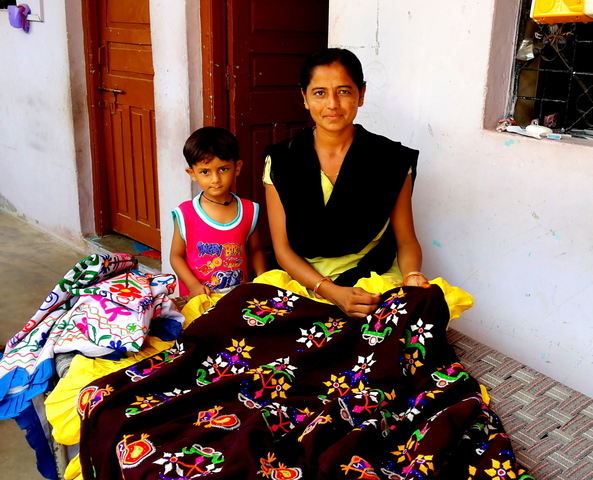 Amariben shows her work of embroidery