This 5-year-old’s Hospital Room Echoes With Screams Of Pain Due To An Abscess In His Liver | Milaap
loans added to your basket
Total : 0
Pay Now

“He is kicking and crying every day begging for the pain to end. Even the doctor is unable to see a 5-year-old suffering so much from a disease that often affects people in their 60s.”

Dhanush is 5. He is in UKG. While he should be in school with friends, he is writhing in pain, screaming for help on a hospital bed for weeks. He has developed an abscess on his liver. Covered with rashes from head to toe, Dhanush now needs the world’s help to heal, as his daily wage laborer father cannot afford treatment.

Not just a fever but an abscess in his liver

Around October 5th, Dhanush was running a temperature. Anusha and Ravi are from a small village in Telangana, and like all families, they took their child to a local doctor. He advised rest and paracetamol, but when the fever did not subside even after 4 days, the family visited a hospital in a nearby town.

“There, the doctor said we need to scan his stomach because he suspected a liver problem. It was not just a fever. Dhanush had pus from infection in his liver. The doctor said if it continues he might just die. We immediately admitted him to Rainbow.”

We could only see his eyes and nose, everywhere else, he is red

Dhanush was in a serious condition when he was admitted. The abscess in his liver had begun to cause so much swelling and pain that he was unable to even walk. Ravi, a daily wage laborer who hardly makes Rs. 150/day is now struggling to pay the bills for the treatment that is keeping Dhanush’s disease at bay.

“He suddenly got rashes all over his body. Except his eyes and nose, every inch was covered with painful red rashes. If we had delayed even by an hour, he would have started bleeding. The doctor immediately treated him, and with utmost care, his rashes are coming down. We are still not sure how long it would take for Dhanush to recover, but slowly he is getting better.”

Listen to his screams, they echo his pain

Dhanush is now in mind-numbing pain. He is not cooperating with the doctors because he is terrified of what is happening to his little body. He is afraid of being separated from his mother. Even his doctors sympathize with his condition. They are doing everything to help this little one recover.

“The doctors say that this condition often affects older people. It is also very expensive for people like us to face. With our background, and his age, it becomes extremely terrifying to face such a condition. I just hope we can somehow cure our son and take him home.”

Ravi has spent all the money he had on the medicines. He is unable to go to work as he needs to be by his son’s bedside. The bills have amounted to Rs. 1.76 lakhs. Without further treatment, Dhanush’s whole body may get affected.
Your contribution can help save this child’s life.

The specifics of this case have been verified by the medical team at the concerned hospital. For any clarification on the treatment or associated costs, contact the campaign organizer or the medical team.
Click here to contribute to Dhanush or for more details on this campaign.
Donate 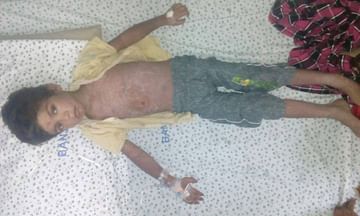 Dhanush has a severe pus infection in the liver and needs your help to get emergency treatment.