It was a Tuesday afternoon: a day marked by scorching heat and the blazing sun. I was heading towards Gandhidham, a small town in the Kutch district of Gujarat. The bus was taking longer than usual. But there was no other choice that I had apart from keeping my calm. Finally, on reaching my destination, we (I, along with the Prayas branch manager) straightaway headed to meet the Milaap borrowers.

I was here to check on the progress of Momai Mahila Mandal, a JLG (Joint Liability Group) being led by Dhanbai Maheshwari, that had borrowed a sum of Rs. 70,000 a couple of months back  in order to develop their respective micro businesses.

Dhanbai, a 43-year-old woman, has worked all her life. She divulged into the details of all sorts of hard, laborious jobs that she has done until now. From plastering the walls to carrying heavy loads, she has done everything in order to cover her household expenses. Back then, she was the sole breadwinner for her family. And it was only with her income that she could fund for her children’s education and simultaneously meet the household expenses. A few months ago, she started working as a daily wage laborer at a factory that manufactures garments. Her monthly income was a sum of Rs. 6000. But later, her health started deteriorating after which she had to leave her work. Thankfully, now she has her sons and husband who work hard, and their income is sufficient to run the house.

She honestly admitted that she utilized the loan from Milaap in repairing the auto rickshaw that her son drives. She also expressed that in spite of her not keeping well, she didn’t want to confine herself to the bed; she ardently wants to work, and next time, she wants to borrow a new loan, which she will invest in starting her own micro enterprise. I am hopeful that the next time she will use the loan to build a sustainable income source that does not require her to struggle so hard. 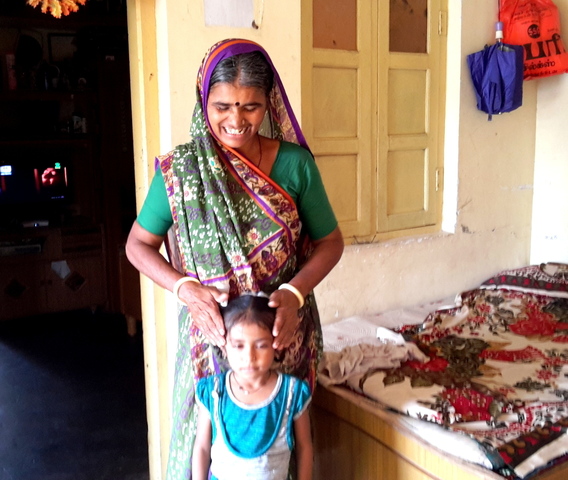 Dhanbai all smiles with her granddaughter