After 4 Surgeries And Multiple Complications, Akash Would Have To Undergo A Transplant Again. | Milaap
loans added to your basket
Total : 0
Pay Now

You are sending a message to
Savita ingoley
Go back

After 4 Surgeries And Multiple Complications, Akash Would Have To Undergo A Transplant Again.

Shares
Shares
Share on whatsapp
"I want to become an auto mobile engineer and I can't waste more time feeling sad about my condition, I will sit for my semester exams, how much ever pain I endure. I have already lost my six months, I won't lose more. I am hopeful that the next transplant will be a success"

Aspiring to be an accomplished Auto-Engineer, 19- Year Old Akash was supposed to start preparing for his engineering 3rd-semester exams in by the end of March. He was constantly suffering from cold and flu, which made him go back home, Since then Akash never returned to his hostel, his health constantly deteriorated and all of a sudden he was diagnosed with kidney failure. He was initially on dialysis, however, soon he underwent a kidney transplant from his father. He showed great signs of recovery but an infection damaged the new kidney and eventually it was rejected by the body.


Akash and his parents are disheartened and are extremely concerned as for how will they manage to undergo the 2nd kidney transplant in a short span of six months. The family needs your help to arrange funds for Akash.

My boy is courageous and he is confident that we will win this battle, we just want to ensure the finances are taken care of as a family we are all together supporting looking after each other in this difficult time. - Savita Akash's  mother

After 4 surgeries and multiple complications, Akash would have to undergo a transplant again.

"By god's grace you have arrived right on time, the boy is sick really sick and needs to urgently undergo biopsy tests, his current test reports don't look good" said the Doctor

The biopsy test revealed 2 out of 3 of the filtration units of kidney were damaged, he required undergoing urgent dialysis to stay alive and a kidney transplant to become normal.

Akash's Father came to his rescue however but that also did not help.

Ashwini, 51 Akash's father became the donor of the kidney and hoped his kidney would take his child's pain away. On 28th July the transplant was conducted successfully and the family prayed for Akash's speedy recovery.

Akash had initially complications after the transplant, he was even shifted to ICU however in a weeks time he started shown great signs of recovery and everybody in the family was relieved that their child was saved.

On 19th Aug Akash suffered heavy bleeding it did not stop the whole day, the body had rejected the kidney as the kidney had suffered some infection internally and had to be removed.
He is since then is on dialysis and would have to wait another six months to undergo a 2nd kidney transplant.

With hospital bills shooting over 35 lakhs they need your support.

Aakash parents Savita and Ashwini are trying everything that can save their child. Initially, the budget for his treatment was set to 5 lakh rupees but due to several complications, the bill as of now stands over 35 lakhs. They still need to clear 14 lakhs of that bill.

The 2nd transplant could be a cadaver and might cost close to 7 lakhs, post-treatment with even out any complications bill could still reach at least 10 lakhs.

Ashwini is currently between jobs and Savita's salary may not be enough to arrange funds for the 2nd transplant in 6 months.
Your contribution will help in saving the boy and supporting the family in testing times.


The specifics of this case have been verified by the medical team at the concerned hospital. For any clarification on the treatment or associated costs, contact the champion or the medical team.
Click here to save Akash
Donate 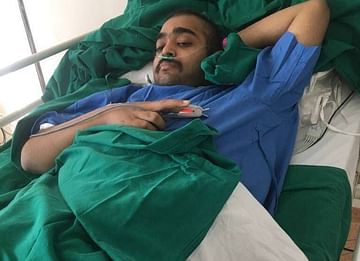