By Sreelakshmi
03 March, 2020
Shares
Share on Whatsapp
If Kerala is god’s own country then Andaman is an untouched paradise!With over 572 islands; thirty-seven inhabitable, Andaman is not just a place to visit but a story waiting to be unravelled. Every bit of the place has a history and a story that leaves one yearning for more. The trip of seven days and seven nights seemed like dipping a finger in the ocean; for the culture exploration, places and experiences to have are infinite.My family and I started from Delhi on a cold wintry morning of 3:30am. Flying from Indira Gandhi International airport at 5:00am, I took a left side window seat, as I had learnt that it provided an aerial view of all the Andaman Islands.While flying over the Andaman, the first island visible is home to the famous Sentinelese tribe. They are known for living in isolation. Visiting their island is forbidden, so, an aerial view is all you get.As I soaked in the crystal clear and varied colours of blue water below, I didn’t realize when the plane started losing height and landed at Port Blair.
Now, the first place that everyone by default visits is the brutish British penal colony of Cellular Jail. And that is where we went. This place was solely built to exile freedom fighters from mainland. The men were tortured extremely; they were subjected to inhumane conditions and were given difficult jobs such works as done by bulls. On top of that, their work was made difficult by making them wear rugged coarse jute clothes which in humid climate of Andaman, led to irresistible itching. With hands and legs chained, the men could hardly itch, and they had to rub themselves on the ground to relieve them. Morbidly so, the British jailers enjoyed watching the men struggle. This is just one of the many cruel treatments that were meted out to the freedom fighters.
Visiting Cellular Jail, one cannot but fail to feel overwhelmed at the struggles our countrymen went through and revere the privileges we received because of them. 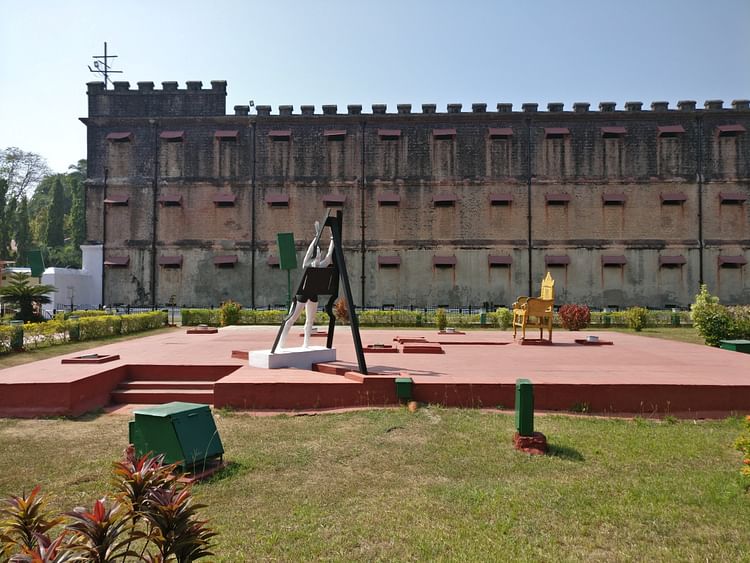 Cellular Jail, Port BlairAfter the visit to cellular Jail, the next destination was Chidya-tapu (bird-island) beach. It is a famous spot for bird watching. It is also a popular sunset spot in Port Blair. This beach was better than any beach I’d been in the mainland of India, but the best of beaches were yet to come.Finally, as the evening closed; we saw the light and sound show at Cellular Jail. 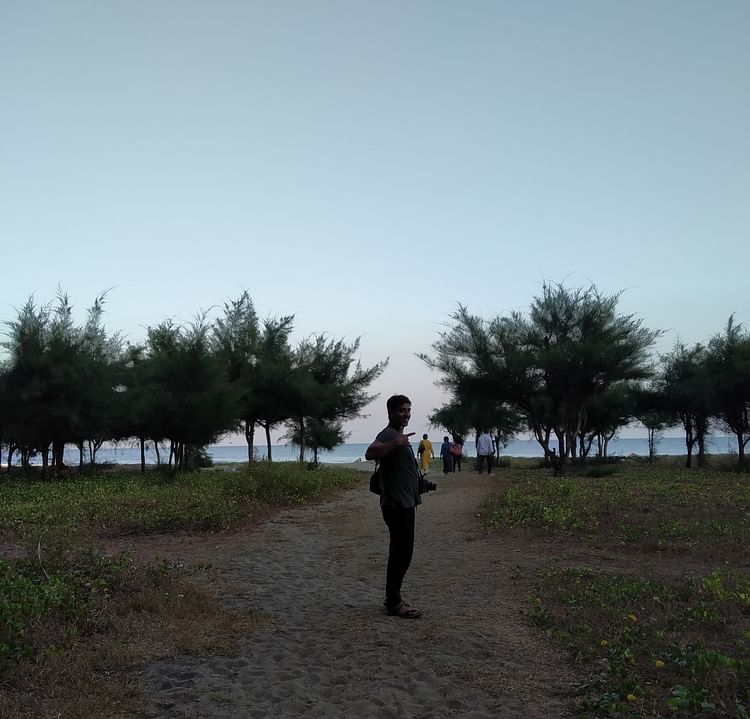 Dhani Nallah during sunset, near RangatThe next day, we got up early to leave for Rangat. We drove, crossed ferries, and after a long day in evening, reached Dhani Nallah; a mangrove natural walkway. The walkway had an amazing beach at the end with white sand and mangrove forests nearby. It was a sight to behold! Must say, Andaman tourism did a praiseworthy job in developing the place. After seeing, yet another sunset, we called it a day.The next part of the journey was one of my most sought after locations. And these were the virgin deserted beaches of the less traversed Long Island. I had planned my entire trip around this place; that is the lesser known, mesmerizing Long Island. This island consisted of three islands – Lalaji Bay Beach, Guitar Island and Merk bay Beach. There are two ways of reaching the Lalaji beach, take a boat; easier but expensive and second option is to walk through forest until reaching the mesmerizing white sands where one can hear the sea singing the lapping melodies from ashore. We had taken the boat as we were six people. The speed ride was another adventure in open sea. As we neared the beach, the words untouched paradise came alive! 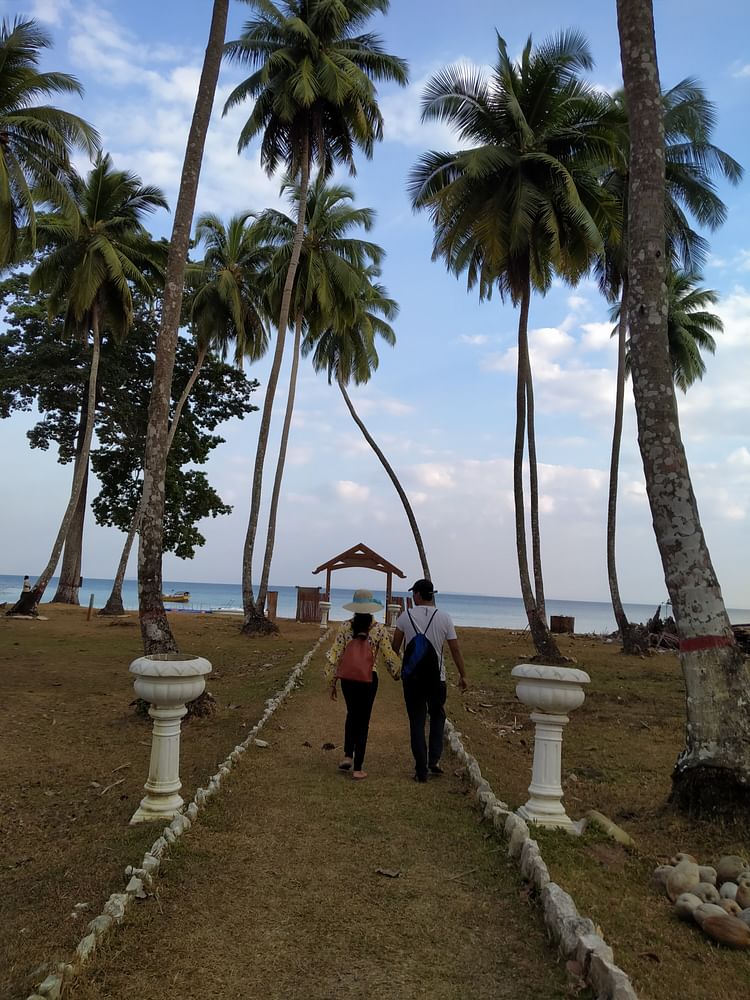 Lala-ji Bay Beach, Long IslandCrystal clear pristine blue water, white sand with coconut trees and forest adorning the shores; it was breathtakingly spectacular! We swam in the shallow water and had lunch there. While returning, we touched Guitar Island. This island consisted of two circular land masses connected by a streak of land which could be crossed only during the low tide. Luckily we reached during low tide. We visited both the land masses; saw a beautiful red crab and many live sea shells.As I returned from Guitar Island, we heard that Merk bay beach was the best amongst all the beaches in Long Island and promptly decided to visit it the next morning. 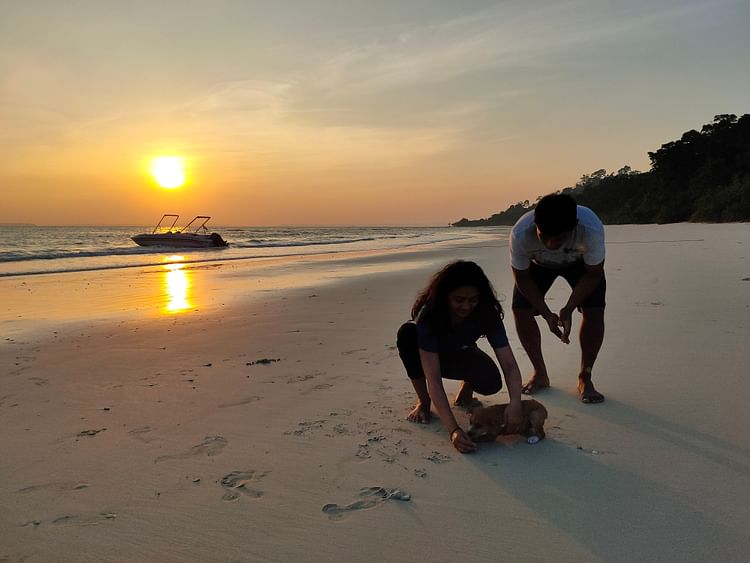 Company of a pup in Merk Bay Beach, Long IslandAnd true to the words, the sunrise on Merk Bay turned out to be an unforgettable experience. We danced, went crazy and laughed as hell. The beach was magical! The sea-life on the shore was undisturbed and seemed at peace. It felt amazing to stand at a place that was raw and pristine. It was nature at its best.After this beautiful sunrise, we headed to Havelock Island. We caught a government ferry from Long Island. Government ferries are slow but are spacious and have more leg room than the private ferries. I went up above the deck. The officers were friendly and helpful.  We almost missed our stop at Havelock but the officers were kind enough to take a u-turn and drop us back at Havelock. Now this island is the USP of Andaman. And true to its advertising, it was not a disappointment, but the place was crowded. It was another touristy spot with people shouting and couples going La La. Still, it was fun to be there. We moved away from the sea to the side of very tall trees in the island and were awestruck by the height of the trees. After spending some quality time and watching the sunset, we had local street food and left for hotel. 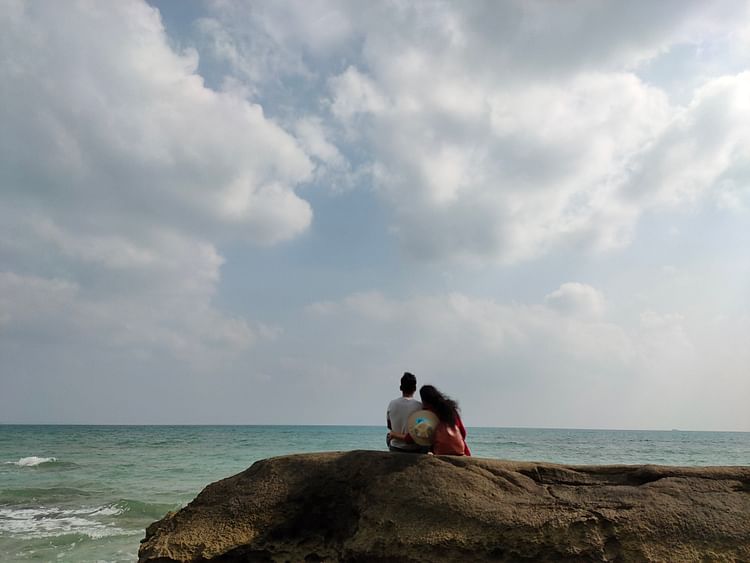 A huge black rock in Kalapathar beach, Havelock IslandThe next morning, we viewed Kalapthar. This beach is unique for its black rocks near the shore. There were lot of green crabs scuttling around and it was so much fun to just observe them. We sat on the rocks and spent half an hour before leaving to jetty. As we were leaving, we were wondering how big the island was and how less we had seen of it. And why everything had to be so rushed up. But then we had to catch a private ferry to Neil Island. We had already booked the tickets on Macruise. This was a private ferry. Here it was all closed unlike the government ferry, so couldn’t explore overboard.
In two hours, we reached Neil Island. After checking into a resort and having lunch, we went to see natural bridge on Laxmanpur beach Two.  In this beach, corals had been washed ashore when Tsunami had hit Andaman. These corals could be seen decaying in open. A lot of aquatic life gets trapped during high tide in the small puddles formed from the dead corals on shore. After seeing some flora and fauna of underwater sea, we moved to Laxmanpur beach one. 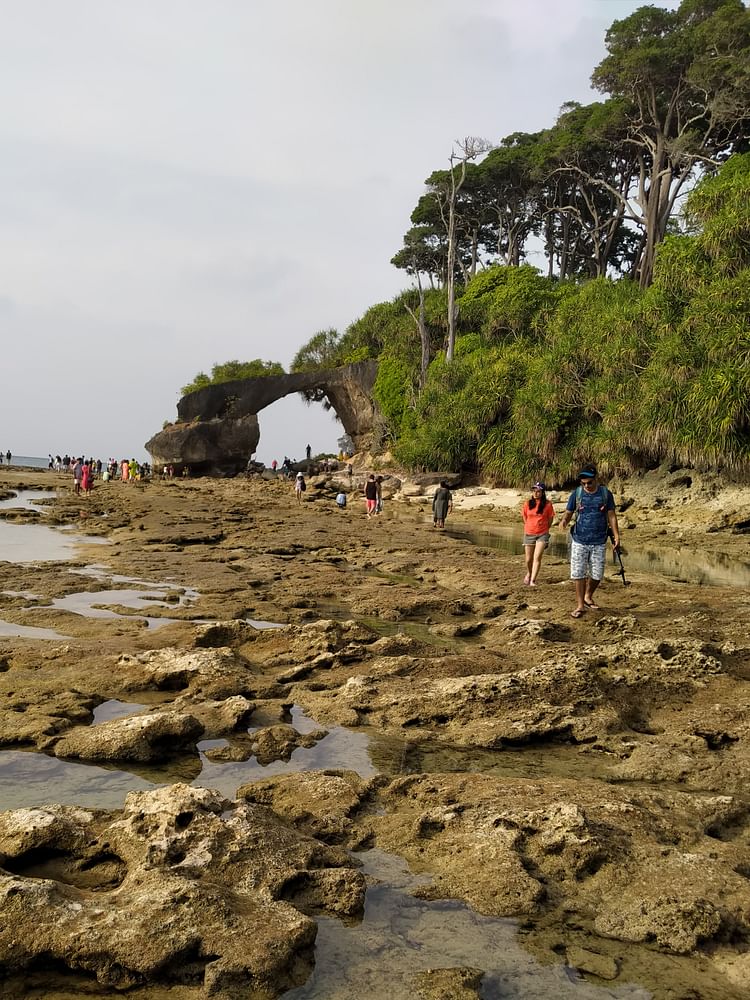 Laxmanpur Beach 1, Neil IslandLaxmanpur beach one didn’t live upto Andaman’s standards of beauty. So we were a bit disappointed. Also, the place was crowded and the sky was clouded, so we were unable to see the sunset.Early morning next day, we did something Andaman is famous for; scuba diving! We dived in Bharatpur beach. It was a mind blowing experience! We got clicked underwater and I touched the sea bed. The fishes, the corals everything seen the day before looked ever the more vibrant! Also, being under clear water was an experience unlike any. I felt like a mermaid floating near the corals with fishes swimming by. 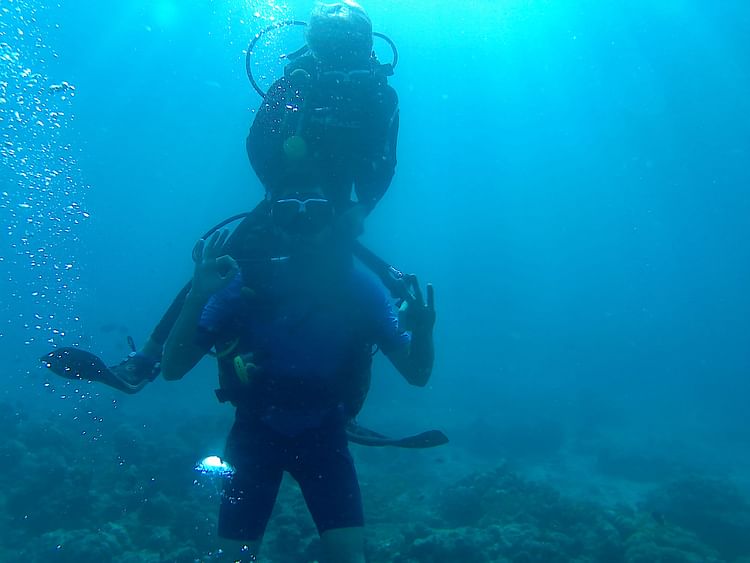 Scuba diving at Bharatpur beach, Neil IslandAfter the dive, we returned to Port Blair and headed straight to Ross Island. Once called the Paris of East, the place used to be headquarters of British while living in Andaman. Now, the island is home to deer, peacocks and other wild beings. All the buildings in the island are in ruins. Ross Island also has a history of Japanese invasion. It was bombed by the Japanese troop during World War 2 and it was the first place to gain independence from British. After touring the island, we tiredly returned to our hotel, had dinner and played cards before going to sleep. 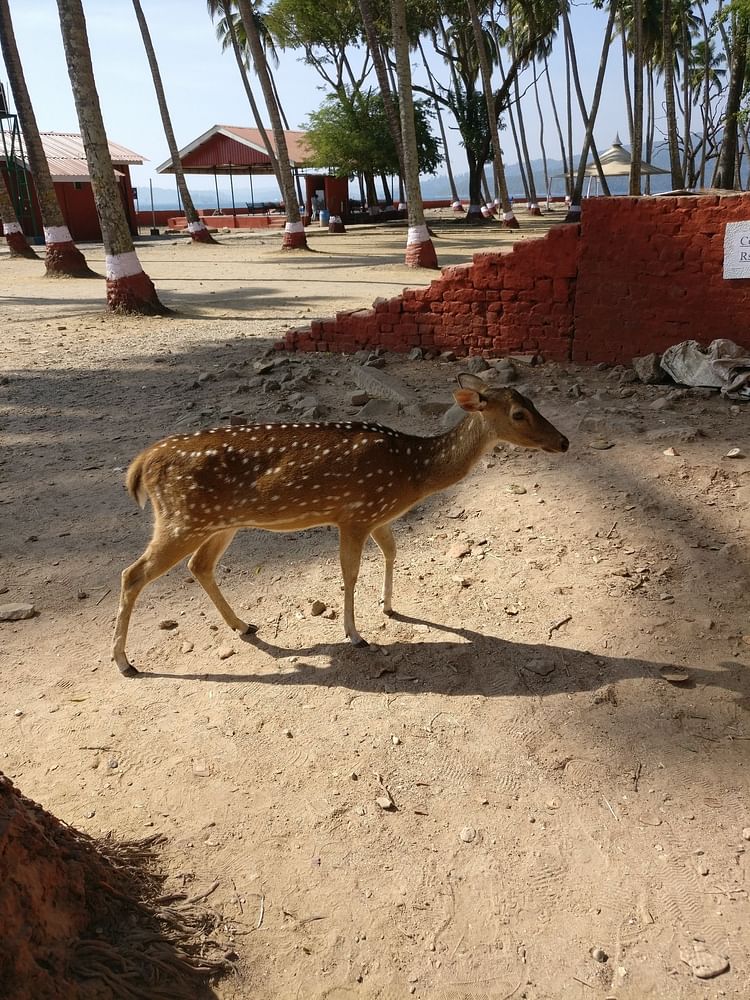 Ross IslandThe next day again, we headed out early morning to Jolly Buoy. Now, if you’re someone who is a fan of underwater sea life, then Jolly buoy will be a heaven for you. We saw aquatic life this time through glass bottom ride. There were different varieties of star fish and sea cucumber. The island closed at 4:30pm but we left early for we had to leave for Mt Harriet. We had a hurried lunch but we still got late for trekking. The trek required at least a whole day starting early morning as it is a fairly difficult trek with 16kms of walking within the forest.In Mt Harriet, we saw and stood at the point which is behind the old twenty rupee note and left for hotel. 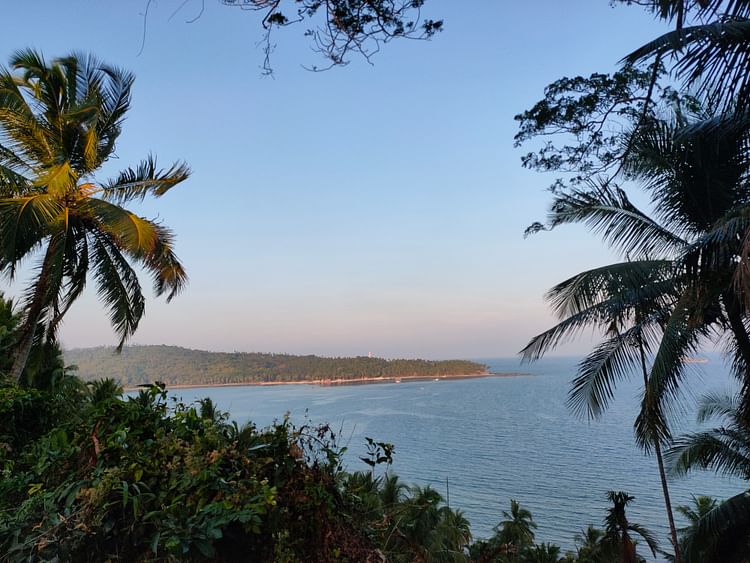 The rear of old INR 20 noteFor visiting Andaman again, I’m saving up. What about you?