Irudiya Has A Dream To Give A Lovely Home To Destitute People | Milaap
loans added to your basket
Total : 0
Pay Now

Shares
Shares
Share on whatsapp
Every time Irudiya sees a homeless person suffering on the road, he just has one thought in his mind- what should he do to save them. Now his family is a group of homeless men and women and he is on a mission to find them a permanent home.

When he saw a poor man on the road, he stole food from his house to feed him

Irudiya Raj started caring for people in need from a very tender age. He used to distribute his tiffin to the poor and remain hungry all day during his school days. His pocket money was never used for his personal needs. He used to spend all his pocket money to help poor people around the locality with their basic needs. His heart always cries for the poor. He even went to the extent of stealing food from his home to feed a hungry man on the street.
He was doing whatever possible for people in need but now wants to do much more. He dreamt of building a shelter for homeless and take care of them. He wanted to give them the love and care they are deprived of. But he could do very little for them as his hands were tied to lack of resources.

Irudiya was once down with deadly flu that changed his life completely.

Once Irudiya was bed ridden due to deadly flu. It was then that he felt how helpless people could actually feel in these conditions. After recovering he continued with his social service. Every time he saw someone suffering he felt like bringing him home with him. He didn’t have enough space to accommodate people. He thought of opening a shelter for them so that no destitute is homeless.

“Until  the last man is alive nobody is an orphan, and in God's creation nobody should be an orphan".

When he shared his thoughts with his father, he gave him Rs. 50,000 from his hard-earned money and told him to go ahead. Irudiya started working towards his noble dream by starting Care Shelter in a small rented house with two inmates. There was no looking back after that, he has dedicated his life to the service of these homeless people. Now Care Shelter is a loving home for 50 people. They rescue people from the streets give them food, shelter and medical assistance, gives them love and takes care of them. Above all gives them an opportunity to be a part of the family.
They have been asked to leave from the current shelter house in another 120 days
Care Shelter had to face a lot of difficulties. The residents mostly need a lot of medical assistance and have to be taken to hospitals for treatment regularly. They usually commute in auto rickshaws. It is difficult at times because of their medical condition. The shelter is in need of an Ambulance immediately. Moreover, the property owner has some issues and has asked them to move to some new shelter within 120 days.  Irudiya wants to at least get a house on long-term lease so he can give them a permanent place to stay.

Your contribution can help him get a step closer to his dream of providing a home to the homeless. 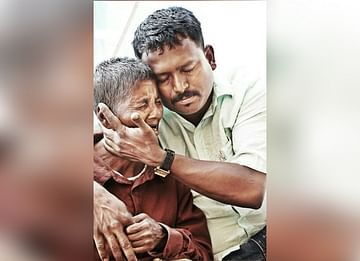 Care Shelter has just 120 days to vacate their old home and find a new place for themselves....