The Gift of Time | Milaap

You are sending a message to
Anuj Khandelwal
Go back

The Gift of Time

By ibrahim.milaap
10 March, 2016
Shares
Share on Whatsapp
MentormeIndia is a non-profit organization which works with Mumbai kids from low-income communities. They connect them to handpicked mentors who act as strong role models and help the kids reach their full potential. On Sunday, February 14th, the MentormeIndia’s team celebrated love with their “Big MMI Day” where all team members and mentor-mentee pairs were invited to hang out. Fortunately, I, as a Milaap Fellow, was also invited to this celebration.
The event was held in a public school in Goregaon. The air was bustling with energy as I entered the premises. At some place the kids were playing football with their mentors, some were drawing in a corner, some were engaged in a jigsaw puzzle contest while some mentors were sharing their lunch with the kids.
I met most of MMI’s team, from the executive director, Dayoung Lee, a chirpy and humble person, to the program coordinators, Shweta, Dharamaraj, and Sabah. I also met their Finance and Dev. Manager along with Milaap campaign owner, Nikunj. They seemed like a really happy and enthusiastic bunch. I guess one would be when, as Shweta and Sabah said, “Working for MMI, each day is different and like an adventure”. They introduced me to some of the mentor-mentee pairs and I had a one-on-one with a few of them.
First, I met Vinayan Mohandas and his mentee, Aditya. Vinayan is one of the oldest and most active mentors. Aditya, who lived in Goregaon, is one of the most hyperactive kids I’ve seen. Standing still or listening and talking to one person was not his strongest suit. While we talked, he kept running all over the place, barely listening to what I asked him. Finally, I settled with a high-five from him and even that felt like an accomplishment. My respect for Vinayan grew almost instantly.

Then I met Malkava Bommidi. She herself was educated by an NGO called Udaan Foundation in Powai. To give back to the society, she then went on to teach in the same organization for a few years. Right now, she works as a teacher in a primary school. It was apparent that Malkava had infused the same teaching spirit in her mentee, Pinky, who told me that she was going to become a teacher when she grew up.
After that, I met Abhishek. Although he was not an active member, he continued to regularly meet up with his mentee, Steven. “Steven is a very enthusiastic kid, full of energy and not at all shy”, Abhishek says “Sometimes he would want to become a DJ, at other, a footballer. Right now he wants to be a drummer”. Abhishek feels that at times Steven teaches him as much as he teaches Steven. “It’s more of a friendship between us. He has taught me how to ride a bicycle, how to fly a kite and such”. I found Steven and asked him “Bhaiyya ne kya kya sikhaya hai?” assuming that he might not know English that well. “Bhaiyya has taught me how to hold a drum stick, soon he’ll teach me how to drum completely”, he replies to my delight.
I am really inspired by the job that the MMI team and the mentors are doing. I would strongly suggest the readers living in Mumbai to apply to be a mentor because perhaps the most precious thing that you could give someone is the “GIFT OF YOUR TIME”. You can apply to be a mentor here. If not that you could always contribute by donating to MentormeIndia to help them run their operations. Click here to contribute. 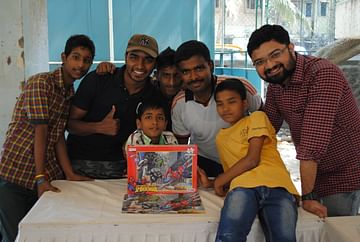 Your contribution will impact the lives of underpriviliged children