Help Baby Biban Whose Cancer Was Not Caught For A Year Because He Lives In A Remote Town | Milaap
loans added to your basket
Total : 0
Pay Now

“He is crying all the time – he just learnt to speak and his first words, and they accuse us of keeping him away from home in the hospital. The crowds, the treatment and the language – all are new and alien to him. He is always scared,” says Biban's father Binod.

Biban's blood cancer has become quite advanced because the parents could not take him to a good doctor in time. Binod even considered selling a kidney to try and raise some money – but even that would only be a drop in the bucket in saving his only child.


More than anything else, Biban is scared of the hospital and he just wants to go home

Biban's father lost his job taking Biban to the hospital

Biban was always a sickly baby. He constantly fell sick with fevers, bouts of cold and infections. His parents took him to the local clinic in Asansol, West Bengal. Medicines made him better for a few days. But he would fall sick again. Nothing made him better for good.

“In time, people around us started telling us that this was not normal. Biban was weak and had lot a lot of weight. His skin had become dark and blotchy. His hair was falling off. We took him to the best doctor in Asansol told us we had take him to a city or lose him,” explains Binod.

The family borrowed heavily and took Binod to Apollo Hospitals, Chennai. Because this is their only child, Binod and his wife Rina don't want to take chances with his health. They have spent over Rs 3 lakhs on treatment – an amount unimaginable to the family. The money has been borrowed at crippling compound interest in the local lending market.


Biban, with his aunt at the hospital

Binod also lost his job at the cement shop where he worked because of prolonged absence. Even his monthly salary of just Rs 3,000 was a steady means of managing expenses. Desperate to earn money, Binod has gone back to Asansol and now sells dry fruits door-to-door. His earnings are considerably less than before but he sends everything he makes to his wife and child in Chennai.

Biban is with his mother and aunt now in Chennai

The illness has brought about a transformation in Biban. While he was always a sickly child, he laughed and played like any other baby. But now, he is very scared and only talks to his mother and aunt. Every time they enter the hospital, he cries and asks to go back home.


Biban on one of his better days at home

Binod wants more than anything else to be with Biban and Rina at this time. But he has to stay in his hometown and keep arranging money for the baby's treatment. So far, the treatment has been going on for a month without interruption. Binod wants to make sure that it keeps going for as long as possible.


Biban at the hospital with his mother Ritu

“This is the worst time of our lives. Even as kids – if we used the word 'cancer' in our pretend-games people scolded us. It was a disease every one feared and wanted to stay away from. But our first and only child is sick with it and our only choice is to fight it,” says Binod.

Despite Binod's best efforts, if his funds run out, Biban's treatment will stop. His parents are trying their best and making big sacrifices to save him. But without some help, Biban's Cancer will take his life.

Contribute to the fundraiser so Baby Biban can get better and finally experience good health and happiness. 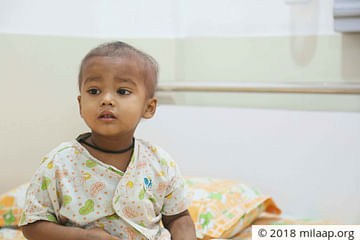 Save Baby Biban from an aggressive blood cancer

Biban's parents are desperately trying to save their baby from cancer and they need your help.