How The Internet Helped An Unemployed M.Tech Grad Save His Premature-born Son | Milaap

How The Internet Helped An Unemployed M.Tech Grad Save His Premature-born Son

By Shruti Suresh
09 July, 2018
Shares
Share on Whatsapp
The first time Vikram and Suman Kumari held their newborn was 3 months after he was born. They were ecstatic when their doctor walked in and said, “Yes, you can take him home.” The last 3 months became a blur, and at that moment they were grateful, to God, to doctors, to the hospital, and most importantly, to the thousands of people who helped save this baby boy.


Vikram, an MTech graduate from Hyderabad was shuttling between companies across the city trying to land a job for months. He had been working on temporary projects for the University but decided that was not enough when his wife announced the news of her pregnancy. The couple was sure that they could manage the expenses, with a little help during delivery.

“We never expected a premature birth. At 28 weeks, I felt the water trickle down. At first, I thought it was just a trimester symptom. Suddenly when I started cramping, I knew what was happening. I screamed for Vikram, he rushed me to the hospital. The doctors tried to stop the labor for hours. Finally, there was no choice but to deliver. I still remember begging to let my baby stay for a little while longer. I was sure he would not make it.”

Suman was in excruciating pain for 2 days. She was not allowed to see her son as she could not leave the bed. As for the baby, he was in the NICU fighting for his own life. He was anemic, with chronic lung disease, sepsis and more complications from premature birth. Vikram still remembers seeing his son’s face for the first time through the glass, unable to recognize him under all those tubes and wires.

“Even if we did not know at the time, our son was lucky. He had a good chance of surviving this. All he needed was intensive care round the clock. Our problem was the money. We could not mobilize Rs. 17-18 lakhs in time. We had no job. My father gave us 4 Lakhs after taking a loan from his army pension fund. He did not know that was not enough. My friends from BTech came forward with donations. We were far from the goal.”

Vikram and Suman’s story caught the eyes of thousands of people when a fundraiser was set up on Milaap. Few of those people included his undergrad friends who are now abroad. They recognized Vikram and began sharing the story in their circle. Slowly the money started pouring in.

“Because of Milaap, I have people both familiar and unfamiliar calling me from London, USA and Japan. Some of my friends contributed, and so did strangers who were moved by our story. We raised over Rs. 13 lakhs. Coupled with whatever we had collected on hand, and paid already, we were able to make it through the treatment.”

Today, this baby boy is home, sleeping either in his mother’s, father’s or grandfather’s arms. He will probably be the most pampered boy in the world, but he deserves it having gone through such a nightmare. He now weighs 4 kilos, is almost off oxygen support, responds to his parents’ voice, cries to complain about hunger or wetness. All they are waiting for is to hear him laugh for the first time.

“There was a time when we felt hopeless. Everyone who helped us is a miracle that happened to us. We are so grateful, so happy, and indebted for life. The donors are still following our story. They want to know that my baby boy is doing well, whether we have named him yet. We will, as soon as we know he is 100% in the clear. I cannot express my happiness enough. Suman, is sometimes delirious with joy. You made this possible.”

Vikram is still on the hunt for employment. He is waiting to hear back from a recent interview at TCS. His son survived. Now, this father is working on a way to help them all live.

Save a life, and be a part of more such success stories. 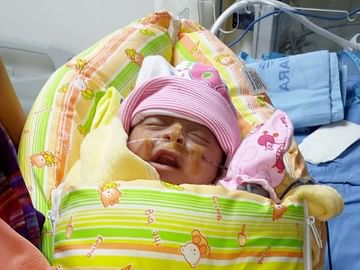 Hyderabad M.Tech Grad Cannot Afford To Save His Premature-born Son

Their baby was born premature and they were in need of urgent help to save him.