Hyderabad M-Tech Grad Cannot Afford To Save His Premature-born Son And Take Him Home | Milaap
loans added to your basket
Total : 0
Pay Now

“I am an example of the failed education system in this country. I have done my masters in engineering but it still wasn’t enough to get me a stable job. My 45-day old son is fighting for his life in the ICU, and my sick father is waiting to receive his first grandchild at home. But I have no money left. I feel like I have failed as a father,” - Vikram

Vikram used to work on temporary projects for the Hyderabad University before and was preparing for some government jobs, when he got married last year. He was going through many struggles, but was hopeful that given his qualification he would get a good job soon.

“When my wife announced that she was pregnant, I was sure I could manage expenses. I knew I would have to take a small loan for her delivery, but never in my wildest dreams did I imagine that our child would need such expensive treatment. I had to even let go of my temporary job to monitor his health full-time at the hospital. There is nobody else who can get things done,” says Vikram.

Vikram always managed to keep Suman happy despite his shortcomings

Vikram’s wife, Suman Kumari, had such a smooth pregnancy that she remembers telling her mother that she hoped to have an easy delivery. She went for scans and took medicines regularly. Suman and Vikram were waiting to take care of their baby in the best way possible. But at 28 weeks her water broke unexpectedly and she had to wait for hours before doctors finally decided to deliver her baby.


“I was in so much pain. I had to wait for so many hours and change two hospitals before I knew I was giving birth for sure. My legs had become numb and I thought both my baby and I were going to die. As soon as I delivered, they took my baby away. I had to wait two days to see him,” - Suman

And now, Suman is scared to even touch her baby because she thinks he can get infections fast. She does not want to endanger her baby’s life at any cost, even if it means to stop going near him or holding him too much.

The couple’s baby boy had many birth complications, ranging from low birth weight to breathing difficulties and infections. He has even undergone one major surgery. The doctors have clearly told Vikram and Suman that without prolonged stay in the NICU, their baby will not survive.


“When I see his tiny body encased in tubes and medical equipment, I am filled with guilt. If only I had a high-paying job. I have taken money from friends and they are helping me for now, but I am not sure how I will pay off the expensive medical bills. Every day, he has some or the other complication. Doctors have still not been able to put him off the ventilator. Expenses are escalating and I have lost count of the number of times I have borrowed from people. I do not know if they will help me anymore,” - Vikram.

Vikram’s father is a retired army personnel who is a heart patient. He has taken Rs 4 lakhs as loan from his pension fund to help Vikram with expenses. The elderly gentleman has not even met his grandchild, but has given away his life’s worth for him.

”If this is not love, I don’t know what is. My father has been really kind and supportive, despite him having a weak heart. He gave me the money saying, ‘Bring my grandchild home.’ But how do I do that? He thinks Rs 4 lakh is enough, but how do I tell him that it’s nothing at this point? I don’t want to lose my father too,”- Vikram

Vikram cannot afford Rs 18 lakhs that is required to fund his baby’s medical expenses. The baby boy is fighting hard but needs more comprehensive treatment and time to be fit for this world.

Your small contribution can save baby of Vikram and Suman

Click here to save baby of Suman and Vikram 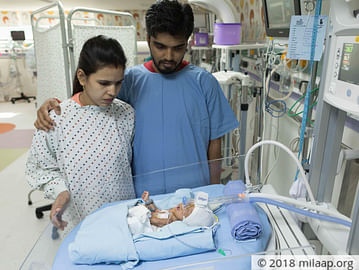 How Can We Pay 18 Lakhs On Zero Income To Save Him?

UPI: givetovikram@yesbankltd (Copy to clipboard)
Or
Click here to read the instructions before you make a bank transfer.