V
You are sending a message to
Vikram
Go back

“I had three miscarriages, and this is my first child. He has been the stronger than the others, I know he can live. Only, his life depends on whether he can get treatment,” says Lakshmi, the baby's mother.

Despite strictly following every instruction her doctor gave her, Lakshmi's baby was born almost three months premature on April 27. Though his heart and lungs are not yet completely ready for the outside world, the baby is clinging to life and gaining weight. Lakshmi and her husband Srinivas can only save their only baby if they make sure he gets breathing support for a little longer.

Lakshmi has not held her first baby even once

This time, only after her fifth month of pregnancy, did Lakshmi allow herself to believe that she would finally have a baby. After three miscarriages, Lakshmi was despairing of ever becoming a mother. Her sixth month of pregnancy was a very happy time, something that would change very soon.

“My pains started in the afternoon. We rushed to the hospital closest to the village and they did an operation (c-section). But when he was born, they said we had to take him to Hyderabad. We came here in an ambulance hoping that he would be saved. Instead, they told us that he had jaundice, holes in his heart, and breathing trouble,” Lakshmi recalls.

They know that their baby wants to live and grow

Slowly and steadily, the baby's condition is improving. The holes in his heart are slowly closing and his jaundice is better too. He has gained 9gms body weight and started feeding. He opens his eyes and looks and his parents. He grasps their finger tightly when they touch him. He even cries – and the sound is both happy and painful for his anxious parents.

“Last week, they took him off the ventilator and immediately, he couldn't breathe and his heart was stopping. The doctor tells us he will get better in one month. Till then we somehow need to keep him here. But how? We no longer have anything left,” says Srinivas.

Lakshmi and her husband wash clothes for a living

Lakshmi and Srinivas moved to Bommakal, Karimnagar and started a small laundry shop to earn a living. They wash and iron clothes and earn up to Rs 300 a day. They have been saving for years to have a baby. But it was simply not enough. They kept their baby alive till now, only by borrowing heavily.

“We have nothing. We didn't know that we would be in this state today. We have borrowed over Rs 7 lakhs – who will give us anything more now. If we want to keep this child – we have to somehow pay for his treatment. Without that, we can't have him,” Lakshmi says as she breaks down.

This baby is his parents' last hope for happiness. Till now, they have put in everything they had into his treatment. All their pleas for help have only kept him alive till now. To save him, they need to make sure that their baby can breathe for another month.

Your contribution will save this baby's life. 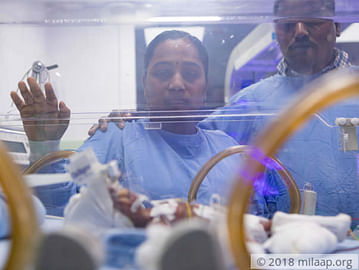 More Than Anything, Lakshmi And Srinivas Want To Take Their Baby Home

Their baby has survived 3 weeks and needs few more weeks' breathing support to be out of danger.