Father of a Premature Baby Has Sold All He Had, Yet He Struggles to Keep the Baby Alive | Milaap
loans added to your basket
Total : 0
Pay Now

DP
You are sending a message to
Dr. Prathyusha
Go back

Father of a Premature Baby Has Sold All He Had, Yet He Struggles to Keep the Baby Alive

When Bhakkiyalakshmi was just 29 weeks pregnant, she had a high fever and her legs and body were swollen. She was rushed to hospital and doctors said that a c- section had to be done immediately to save the life of the mother and the baby. A baby girl was born extremely premature, weighing only 690 grams. As soon as the baby was born, she was taken to a different hospital and put into a ventilator.

Bhakkiyalakshmi was also critically ill and needed treatment. She was able to see the baby only a week after birth. This was the longest week of Bhakkiyalakshmi's life. Even through her weakness, she kept asking for her baby. Initially, she suspected that her baby had not survived and her husband and doctors were hiding that from her. But now, though the baby is critically ill, she is relieved that the baby is alive. She desperately hopes to save her baby.

" My husband would come to the hospital every day in the morning and evening to collect milk from me and then run back to the hospital where my baby is admitted. He never had food or even slept properly. We can't imagine going back home without our baby. I believe that God is not so cruel to take away our baby after making us go through all this," says Bhakkiyalakshmi.

From the day his wife was admitted to hospital, Sivanandam has hardly slept

Sivanandam is completely devastated. He looks like he could break into pieces, such is his pain and trauma. He is from Vaniyambadi, Tamil Nadu, and lives with a relative in Chennai. Their house is quite far from the hospital, but he has no other options. He is running back and forth between the hospitals where his newborn baby and wife were admitted.

They don't have a house left - but they continue to hope

Sivanandam has no time to think about the future. He doesn't know whom to turn to for help. Any phone call from the hospital sends fear down his spine. He is that scared of bad news. Any day, he fears, his wife or child may stop getting treatment because of a lack of money. Till now, he managed only because he went back to his village and sold off his house and all his valuables.

"I sold my house and what little gold I had. I had a cow and I sold it too. I don't have anything left. I'm borrowing money even to have our next meal. I have the strength to start everything from scratch. I can earn back all that I lost, if I can go back to home with the baby. Without her, we are nothing, we can't even imagine living without her," says Sivanandam.

Bhakkiyalakshmi and her husband are struggling to save their only child

The baby will need to be in the ICU for another 6-8 weeks which will cost the family Rs 5 lakhs. They have already spent Rs 10 lakhs and exhausted all their other sources. Sivanandam is a daily wage worker and he has no source of income for his family. Bhakkiyalakshmi and Sivanandam are determined to save the baby at any cost. Only your contributions can save the baby's life. 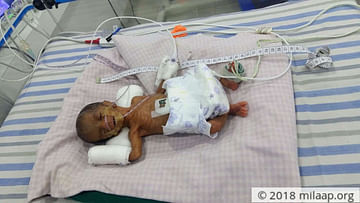 Baby needs extensive treatment. Parents cannot afford it despite selling off their home.