This Mother's 1-Month-Old Premie Will Choke To Death Without Urgent Help | Milaap
loans added to your basket
Total : 0
Pay Now

“My husband and I both love children. So even when I was pursuing my masters in Mathematics, we both decided it was the right time to have a baby. But instead of being cradled in my arms, my baby boy is now fighting to survive in the incubator. It’s been nearly 45 days and his health is not getting any better. A severe infection in his lungs is killing him. We visit temple everyday, put the kumkum (coloured dot) on my baby's head in a hope that God will save our newborn from death but I am afraid I will lose him without treatment,” - Alekya.

Alekya’s baby came 12 weeks early into this world weighing little more than a kilogram. Since the moment he was born, he started fighting for life with respiratory distress, low blood count, infection in blood and lungs. Undigested milk which gets stuck in his lungs has made his condition more critical. He cannot breathe without oxygen support. Only NICU care for at least two weeks can save this tiny fighter.

When I first saw my baby, he was puking blood

Alekya and Suresh were excited to be first time parents.  But, when Alekya was only 28 weeks into her pregnancy she felt a sharp pain her stomach. Suresh rushed her to the hospital. They were hoping to delay the delivery by at least another month with injections to control her pain. But their efforts failed when she started bleeding the next day.


“I don't even remember having a glimpse of my baby. I saw him finally after three painful days. He was very little and his eyes were still shut. Blood was oozing out of his tiny little mouth. I was shocked and even before I could touch him, he was taken away from my sight in an ambulance to Hyderabad,” - Alekya.

The tube placed inside the baby’s body to give him fluids, had touched his stomach because of which the baby was puking blood. The poor facilities in the hospital forced Suresh to leave his wife alone and rush his newborn to a better hospital in Hyderabad.

'It hurts to see my baby crying in pain. I don't think I can hold the little one without hurting him'

Suresh is an electrician in Hanamakonda and earns Rs 5000 a month. His job pays him only on days he works. Due to unfortunate situation he hasn't been able to work since two months. With zero income and overwhelming expenses his shoulders are heavily burdened. He borrowed Rs 10 lakhs on huge interest to save his baby but it is not enough. He needs 3 more lakhs to continue his newborn's treatment in NICU, without which the baby cannot survive.


"She holds the baby's fingers and cries every time we visit him. I promised her that she will not just touch him but will soon carry him home. But, I don't think I can fulfill my promise," - Suresh.

Alekya’s baby is struggling to live and without stranger’s support the little one will soon die without even knowing his parents. Your kind contribution can save his life. 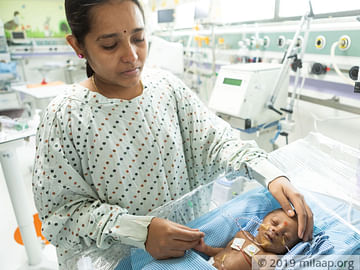 When I first saw my baby, he was puking blood

This preterm baby's immature lungs are struggling to inflate between each breath.