3-year-old With A Swollen Body Is In Great Pain And Will Die Without Help For Treatment | Milaap
loans added to your basket
Total : 0
Pay Now

Shares
Shares
Share on whatsapp
Baby Lakshana is severely underweight and has blotches on her discoloured skin. She is fighting a fatal viral infection in her blood and is tired throughout the day from heavy doses of medicines and injections. Her lungs choke from infected phlegm.

“But this is far better than what she was going through until recently,” says Ramachandran, her father, adding, “Now at least we have some hope that she may survive. For a long time, we used to spend each day thinking it would be our only daughter’s last.”

At this tender age, this baby has gone through two bone marrow transplants; after the recent one, she developed a serious infection that is killing her.

At 11 months, little Lakshana was diagnosed with a rare and deadly immunodeficiency disorder that caused painful swelling all over her body

Ramachandran and Surya were beyond thrilled when Lakshana was born because they always wanted a little girl. Till 11 months, Lakshana was the perfect baby – she never got sick that much and her developmental milestones were met. After that, everything went downhill.

“She used to get high-grade fevers almost every other day. When it was accompanied by loose motions, our concerns grew. But the worst thing that happened to her – she started getting swellings on her body, especially her neck. When I used to touch it even slightly, she would start crying inconsolably. She wouldn’t feed properly either. It took so many tests for the doctors to diagnose the disease because it is so rare.”-Surya, mother.

“The doctors had told us without hesitation that medicines may not help her condition for long because her body’s immunity was very low and she was very susceptible to life-threatening infections. They said she would start getting internal inflammation as well. I couldn’t imagine my baby going through more pain than she already was. I decided to do everything in my capacity to help save her.”-Ramachandran.

Lakshana was a happy child before her health worsened

Ramachandran sent pleas to government officials citing the family’s poverty and urgency, and Lakshana’s first bone marrow transplant was done when she was 1-and-a-half. Her father was happy to give his stem cells and he believed that it would solve her problems forever. Unfortunately, the transplant was not a success as white blood cells in Lakshana’s body vehemently rejected her father’s, pushing her health into uncertainty.


These parents want to see their child alive at any cost

“Her old symptoms – fever, inflammation, loose stools – returned with more intensity. She even started contracting respiratory infections easily. She was not growing during that period – she could not put down food or water. We hoped that medicines would help her, but she kept getting worse. She wouldn’t open her mouth for anything else but screaming. Her shrill screams of pain are still ringing in my ears now."-Surya with tears in her eyes.

Surya and Ramachandran hadn’t given up hope just yet. They hoped for a miracle to make their baby alright as she underwent her second bone marrow transplant last month. But it came with its own set of complications, and now Lakshana is battling for her life.

Lakshana’s disease has no cure except a bone marrow transplant and so her parents were willing to go to any extremes to get her treated for the second time. This time, they borrowed heavily from local moneylenders, family and friends to make the surgery happen, and her father was the donor again as she had no living sibling. The surgery was deemed a success by doctors as her body was responding well to it. However, she developed a viral infection in her blood that needs extensive therapy to manage or can turn fatal.

“Her body has become grey all over. She has patches on her skin and her hair is sparse. My child has barely made it out of two major surgeries. By God’s grace, we were able to get them done at nominal rates. But we don’t have the money for her medical management now, which can ensure that she survives. I'm a poor weaver from a village near Thirumangalam, Tamil Nadu, who earns around Rs 8,000 a month.”-Ramachandran.

Your kind contribution can ensure that Baby Lakshana defeats her disorder forever! 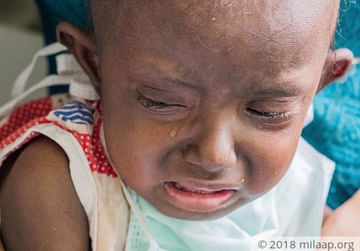 UPI: rzpy.givetomlplakshana001@hdfcbank (Copy to clipboard)
Or
Click here to read the instructions before you make a bank transfer.