Without an urgent liver transplant, 2-year-old Mary Grice might not live to see another day | Milaap
loans added to your basket
Total : 0
Pay Now

Without an urgent liver transplant, 2-year-old Mary Grice might not live to see another day

"I don't even go to the hospital room to see my daughter because I get sacred. She is lying there in the ICU with all those monitors beeping and needles piercing her tiny arms, it breaks this father's heart to see her like this.  My baby begs us for food but we can't give her even that much," said the father as he breaks down.

Her sickness started unexpectedly. On October 6, 2017, Baby Mary Grice complained of fever. Her parents, Prasad and Kameshwari took her to a local hospital in Kakinada, Andhra Pradesh. However, as there wasn't enough equipment to understand the cause of her recurring fever, the family took the baby to Vijayawada. The doctors there said that Mary Grice had jaundice and that her condition was extremely critical. The family was then asked to come to Hyderabad.

Mary, before she became sick, was a playful, happy child

Urgent liver transplant is her only option at survival

The doctors are of the opinion that medicines alone won't help save Grice. She needs a liver transplant soon without which her chances of survival are minimal. The doctors are also worried about the Mary getting seizures before the transplant. If that happens, her brain will be severely affected. The consequences of that would be irreversible.

As it stands, Mary Grice is in the ICU with an entirely damaged liver and her parent's moving mountains to arrange for funds before something irreversible happens.

Prasad (35) and Kameshwari (27) have been married for 10 years and have three kids together. The eldest daughter, Blerry (7) and Tejaswini (5) go to government school while Mary Grice used to go to Anganwadi.

"We haven't told our elder daughters about Mary's condition. They are also kids only, we don't want them to be worried," said their father.

Prasad works as a cable operator in an internet company and earns up to Rs 7,000 per month. Kameshwari is a housewife. Prasad, being the only son of his father, has to look after his parents as well, both of whom are diabetes patients and need expensive medicines every month.

The estimated cost of a liver transplant is Rs 16 lakhs, and with Prasad's meagre salary, the family is finding it impossible to arrange such a huge amount in such a short period.

"We have borrowed about Rs 30,000 from our relatives. With this money, we have managed till now. Please help me save my daughter. How am I to ever forgive myself if something happens to her ?", said a clearly distressed father.

Mary Grice is a child and has her entire life in front of her. If she doesn't get a timely liver transplant, the baby might not live to see another day. Funds raised through this fundraiser will go towards her liver transplant. 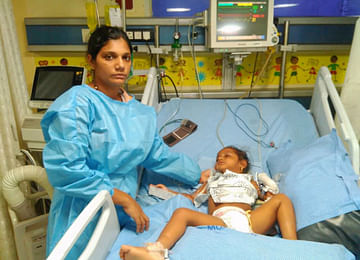 A few days back Baby Grice was diagnosed with acute liver failure but her parents cannot afford...