You are sending a message to
Ranbir Sarkar
Go back

A mishap that would change his life

To even the a hard-bitten sceptic, Ashok Munne’s story makes a convincing case of mind over matter. It lets him call his accident in 2008 and the following two amputations ‘a good thing’. Ashok, then 19, was returning from Bihar and had to take a connecting train at Itarsi. His train was late and he could see the connecting train pulling out of the station.

He caught the tail of the train and despite a reservation, ended up hanging from the door of the last bogey. About an hour into the journey, he fell out of the train, which ran over his right leg, mangling it. He was rushed to the nearest government hospital, where lacking the know-how, his leg was wrongly amputated.

Next month, he was taken yet again to the government hospital near his village and once more, an amputation was performed on his leg. This too, turned out to be a bad job as Ashok’s leg would not heal. By this time, Ashok who was reeling with the shock and grief, simply refused to go back to the inept doctors in the hospital. His parents couldn’t afford any better, so that was the end of Ashok’s treatment.

The road to recovery

With a leg stump that would bleed daily and mounting expenses, Ashok spiralled into depression. Ashok didn’t really have many friends and relatives were wary of being asked for money and decided to stay away. Over the next year, he lost 25 kgs, developed stage 2 asthma and was beginning to get depressed.

Eighteen months after his accident, Ashok, who admits to never being much of a reader, started reading the Dhammo Sanantano by Osho. “It was like a fire was lit in my head. I saw how the negativity in me and not the lack of one leg was getting me down. Over the next six months, I decided to change my thinking,” he says.

He focussed on breathing exercises for the next nine months and cured his chronic asthma. He started exercising, and began going out. And like that, one day, his life changed, and as Ashok says, chamatkar, or the magic happened.

Reaching for the highest peak

Ashok was resting in a park in Nagpur after a walk when he met a lady who ran an NGO. After hearing Ashok’s story, she decided to help him out and took him to Command Hospital, Pune, to properly treat his leg which still bled everyday. The surgery was successful and that evening, Ashok watched the interview of a girl who had successfully climbed the Everest on TV, and he realised he wanted to do the same.

Ashok decided to pursue a fitness regime and scale smaller peaks. He seriously took up swimming, running and cycling. He got an artificial limb worth Rs 500 and managed to scale the Kalsubai and Patalkot peaks in Maharashtra. While the floodlights were on his achievements, the media was full of wonder at the fact that he was able to do this with the cheap and heavy ‘Jaipur Foot’. 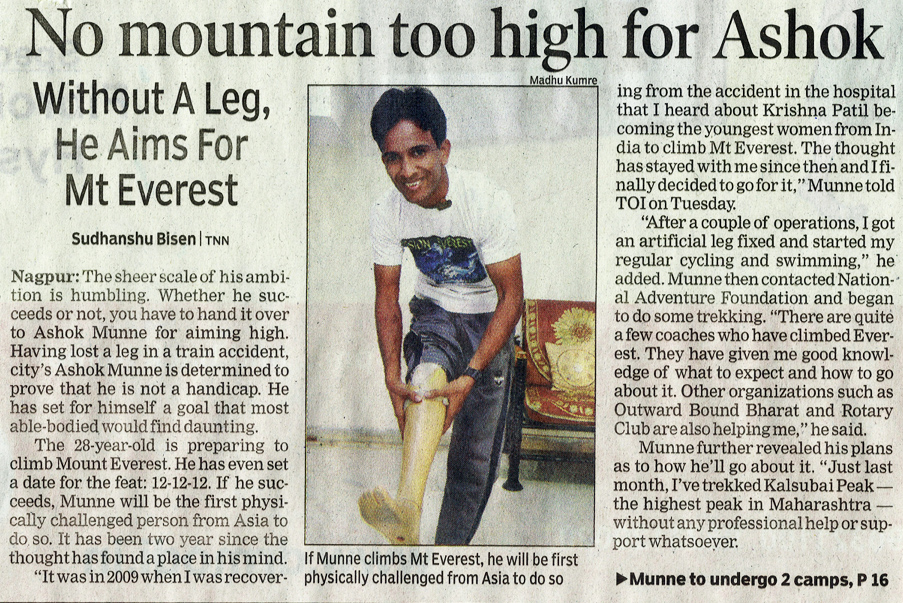 This achievement brought the attention of the prosthetics giant P & O. They donated a prosthetic leg worth Rs 5.5 lakhs to Ashok. With this, he was able to scale the 21,247 ft. tall Mera Peak in Nepal, becoming the first person with a physical disability to scale that peak.

To Ashok, all his achievements make up the small steps to his dream: climbing the Everest, standing tall at 29,029 ft. But to climb the tallest summit requires an expense of Rs 35 lakhs. This money will be used for essential gear, fees for mountaineering institute and the Nepal Govt.

The larger vision fuelling Ashok is proving to the world that with hard work and determination, they too can achieve whatever they dream of.

Your contribution can help Ashok cover the high costs involved in conquering the highest peak.

Donate Know More Before You Contribute
Security & Privacy Conditions of use © 2010 - 2023 milaap.org. All rights reserved.