Shares
Shares
Share on whatsapp
My son is going through a lot of pain. From the day he was born, he had been suffering. We could do nothing to relieve him from pain and now doctors have asked us to arrange for an open-heart surgery or else he will die.
We had our first daughter after 4 years of marriage. Arush is our second kid. He was a premature baby and was admitted to the ICU for around two weeks before we could take him home. Within a week his condition deteriorated again. He had a very bad cold and his mother noticed that he had trouble breathing. They took him to the hospital where he was prescribed medications. His condition didn’t improve and a second opinion revealed that Arush has a hole in his heart.

We had no idea that our son is slowly dying every day in front of our eyes. According to his doctors, an open-heart surgery can only save my son but I cannot arrange for such a huge amount of money.

Last week Yogish had taken Arush to a local hospital where he was diagnosed with H1N1 flu. He has just recovered and returned home. But the misery is still not over for the family. He will not be completely fine till he undergoes the open-heart surgery.
Arush's sister has no idea that he is fighting for life. Yogesh has told her that he has a mild fever and will be fine soon.Yoresh is very scared that she will not be able to handle that her kid brother's condition is actually very serious.

Yogish works as a sales executive with a very meager salary. He cannot arrange for such a huge amount of money needed for the surgery. Some local bodies have come forward to help Yogesh but it is exhausted in his treatment till date.

My son is just 13-months-old. He has suffered from the day he is born and now I cannot even arrange for the money needed to save his life. I feel very helpless seeing my son suffer every day.

The surgery to save Arush will cost around 3.7 lakhs. Is a huge amount for the family. Doctors have assured them that Arush will get back a normal healthy life after the surgery if it is done within two weeks. But to arrange the money in such a short time is impossible for Yogesh.

You are the only hope for Arush.His sister is waiting for him so that they can play together. He has already suffered a lot at such a tender age and will not survive if he doesn't undergo the surgery.Only you can help Yogish give Arush a healthy life.

The specifics of this case have been verified by the medical team at the concerned hospital. For any clarification on the treatment or associated costs, contact the campaign organiser or the medical team.
Click Here To Save Arush
Donate 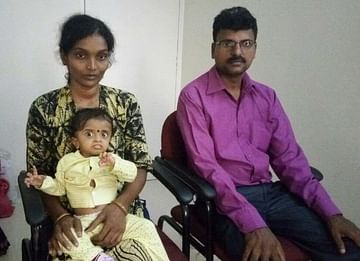 Arush needs your help to undergo an open-heart surgery

Arush has trouble to breathe from the day he was born. Only you can save this little boy