At 12, Society Told her to Serve God; at 47, they Called her a Prostitute | Milaap

At 12, Society Told her to Serve God; at 47, they Called her a Prostitute

By Milaap Admin
30 September, 2015
Shares
Share on Whatsapp
What should a girl do if at the age of 12, she was told by her very mother to make her existence worthwhile by offering herself to God? If at age 47, she found herself as mother of 10 children? Arati Siddavva Harijan lead most of her life as a Devadasi. In the name of serving God, these Devadasis ended up satisfying sexual demands of the temple priest and zamindars running the temple. “I was told I was earning a place in heaven by doing this work, but my then present life then turned into a living hell.” Generations got trapped in this vicious circle of prostitution and subsequent poverty.

Soon this practice was abolished by law. But these Devadasis struggled to reestablish and make a living. Aarti's struggle was no different. Living in the small village of Hallur, in the Belguam district of Karnataka, she was left with no food, shelter or clothing. However she was determined to put her past behind and create a life of dignity for her kids. She started working a coolie and earned a daily wage of Rs. 70. But feeding 10 mouths with Rs. 70 a day was impossible. Soon her elder kids joined to bring home more money. She was not happy to see them work but “I rather see them alive than starve to death.”, she said. In 2012, with the help of a small loan, she started her own cattle rearing business. Soon she witnessed a gradual increase in income. Over the years, she managed to send five of her children to school, arrange a tutor for three of them and enrolled her two sons for a paper making course from sugarcane molasses in Belgaum.

But even after achieving so much, at 47, she feels there is still much more to do. Until all of them are adults, she will need to work a little harder to take care of the family. This is why she has applied for a loan of Rs. 30000 to buy another buffalo. With a lump sum amount such as this, Arati can buy a good quality buffalo from the biannual cattle fair. “I lived most of my life feeling powerless. But then people came together and fought for our dignity. Today, I take pride in the life I have created for myself and my kids. There is still so much more to do.”

Arati never fought the men who used her in the name of traditions. Society told her to serve the God. Then the very same society called her a prostitute. Her past was a victim of society’s choices. But you can make sure her future is carved from the choices that are only her own. 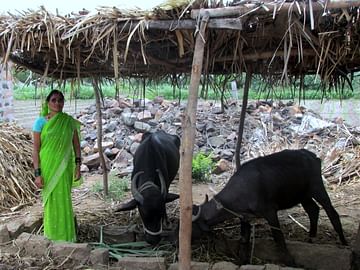 Arati, was forced to become a Devadasi at 12, and was exploited and left with 10 children.