This Father, Who Works As A Coolie, Is Unable To Save His Little Son From A Rare Blood Disease | Milaap
loans added to your basket
Total : 0
Pay Now

BB
You are sending a message to
Binoy Balan
Go back

This Father, Who Works As A Coolie, Is Unable To Save His Little Son From A Rare Blood Disease

Shares
Shares
Share on whatsapp
If life as a poter in a fishing boat was not harsh enough, imagine the plight of Shabeer, when he found that his son was suffering from a life-threatening blood disorder.

The disease Shabeer had never heard of

When his second son, 9-month-old Amanul was diagnosed as Thalessemic, Shabeer decided to get a job that could pay more. He became a helper in the port at Kochi and he helps with loading and unloading boxes with fishes from the sea.
The job is very hard work and needs long hours but pays better than other daily-wage jobs and he can make up to Rs 15,000 per month. He thought it would be enough. Every month, for the last seven years, the family spent about Rs 6,000 for Amanul and Shabeer skips work to take Amanul to the hospital.
Amanul with his parents Shabeer and Aneesha in a hospital in Kochi
While Shabeer could pay for Amanul's medicines and life-saving blood transfusions, the years of transfusions led to dangerous levels of iron in Amanul's crucial organs. But merely treatment is not enough. Amanul needs to stop blood transfusions that will eventually affect all his organs.
Amanul is now 7-year-old and has Thalessemia beta major, which is the most deadly form of the condition. Amanul needs urgent intensive treatment. A bone-marrow transplant is the only option.

Fortunately, his younger brother Salman is a perfect match to give Amanul the much needed stem cells that will produce normal blood cells. With a bone-marrow transplant, Amanul can stop taking transfusions and finally become a healthier, happier child.

This is the only life Amanul has known this far

Even though his parents cannot afford it, they want a better life for Amanul because he has suffered so much already. “From when he was very small, he never cried and complained at the needles and the transfusions. He's a good, strong child who deserves a better life,” says his father.

Amanul himself hopes he can go to school more regularly and play with his friends without getting tired. Especially this year – class 2 – he has missed school very regularly because of frequent hospital trips. He cannot imagine what it might be like to play outside for hours like the rest of his friends.

A bone-marrow transplant for Amanul will cost Rs 20 lakhs. The family does not have this much money. Shabeer wants to do everything he can to save his son's life but the exorbitant cost of the procedure stands in his way.
Shabeer has done everything possible to save his son, including his extended family and the local community. This is his earnest appeal for this little son, and you are the last resort that he has to see his son live a healthy life!

Click here to contribute and give Amanul the gift of a better life.
Donate 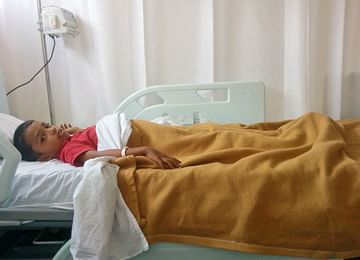 UPI: givetomlpamanul@yesbankltd (Copy to clipboard)
Click here to read the instructions before you make a bank transfer.