Alema earns Rs.100 extra per month thanks to a Milaap solar-powered lantern | Milaap

Alema earns Rs.100 extra per month thanks to a Milaap solar-powered lantern

Unfortunately, the group leader, Mangala Sardar, was not available for an interview. However, several other members were present. Alema Laskar's story was the most appealing.

Alema is an integral member of a group of rural Bengali village women who have borrowed Milaap loans for solar-powered lanterns. Mother to 2 school-attending sons and wife to a tailor, Alema has been for the past 2 years a juri designer by profession.

During the daytime, she works in her home, embroidering juri patterns on saris. She often pursues her work well into the night, where she used to face daily electric power cuts. This used to deter her from working at night. However, ever since she borrowed a Milaap loan to purchase a solar-powered lantern, she no longer faces this detriment. She can now enjoy 10 hours of bright light emitted by her new lantern. She is now able to produce more jodi-embroidered saris, thus enabling her to sell more of them. As a consequence, her income has increased by Rs. 100 a month. Over that, her children are able to study at night with not just bright light, but in safety of her lantern. After all, she used to be particularly worried about them when her old kerosene lamp would burn their clothes, when they were studying under it. She has long since discarded the kerosene lamp. She and her family now only enjoy the benefits of a Milaap solar-powered lantern. 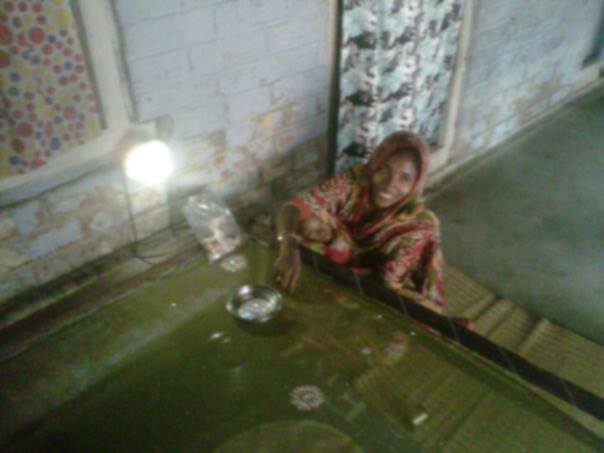 Alema can now produce more juri-embroidered saris at night thanks to a Milaap solar-powered lantern.