7-year-old Akshay Had Multiple Surgeries Since His Birth And Is Still Struggling To Survive | Milaap
loans added to your basket
Total : 0
Pay Now

SN
You are sending a message to
Santhosh Nair
Go back

Shares
Shares
Share on whatsapp
7-year-old Akshay was born with two terrible illnesses. He has no sensation below his hips and has a condition that has caused excess fluid in his brain. Despite the risk and uncertainty, his parents Santosh and Reena are doing everything to help him live a normal life.

He has undergone multiple surgeries since his birth

Akshay’s life has not been an easy one. When his mother was 8 months pregnant with him, he was diagnosed with Hydrocephaly, a condition in which fluid accumulates in the brain, enlarging the head and sometimes causing brain damage. They were hopeful that it could be corrected after birth but to make matters worse, he was diagnosed with another crippling disease after his birth. He has Meningomyelocele, a malformation of the lower spinal cord.

Akshay underwent his first corrective surgery when he was just 3-months-old. The Meningomyelocele was corrected. However, by then the nerve endings were damaged and he is paraplegic for life. As a preschooler, while other kids were carefree, Akshay had surgery after surgery. In 2013, he underwent 4 surgeries in the leg alone to correct his toes.

The surgery that was a ray of hope for a better future, which was crushed when he developed a high fever and fits. An MRI revealed that a part of the ear was damaging a joint. It was then removed but this only caused the swelling in his head to increase. They attempted correcting the condition multiple times. In December 2016, he underwent 9 surgeries to rectify the same. It only happened finally in July 2017.

If  Akshay even laughs or coughs, urine involuntarily starts dripping. He also needs painful enemas once every two days. Due to no sensation below his waist, the enemas cause him pain in the stomach. He also has a tube that has been inserted into his body and is constantly there. The tube has one end in the brain, where there is excess fluid, and connects it to the abdomen.

“As Akshay's mother, I'm very worried about his future. He has good days, where he goes to school. He is very intelligent and he never complains about how painful his life has been. I hold on to any hope we get from the doctors. I am waiting for the day - he is able to live a normal life," says Reena.

Akshay needs many more surgeries before he can live a semi-normal life but his parents have run out of funds.


Akshay can go to school only twice in a week, but despite all his hardships, he is a confident, smart child

“People take months to recuperate from a single surgery. Akshay has been fighting since his birth and has bravely faced multiple surgeries. His mental strength amazes me. He is putting up with so much, and holding on strong, confident that his father will save him. I will not let him down," says Santosh

His father is taking tuition to support the family

The agony of Akshay’s parents Reena and Santosh is beyond what words can describe. Santosh worked in a private company, but he had to take time off to look after Akshay. Though the company was supportive, the frequent absence forced him to quit the job. He started taking home tuition classes at home to earn some money.

Akshay's mother is in constant fear of losing her child

The minute things seem to get better, Akshay's health worsens again. Reena used to work in a textile shop, but she quit to care for Akshay. With his delicate health, she can never go back to work, but is now trying to set up a small online business, because she needs to take her mind off her child's pain to really help him.

She lives in a state of constantly in worry for Akshay. She is also torn by guilt that her elder son Akash (13), hardly gets any attention from his parents because most of the time they are in the hospital looking after Akshay. But Akash has learned to deal and now does things on his own. He understands the situation.

Santosh has spent over 25 lakh on Akshay's treatment till now. They live in a rented house and have been surviving on the tuition fees of Rs 7,000 – 8,000 per month. That, with some savings, and help from friends and family is what keeps them going. They need more support to continue his treatment. Only your contributions can save Akshay from this painful life. 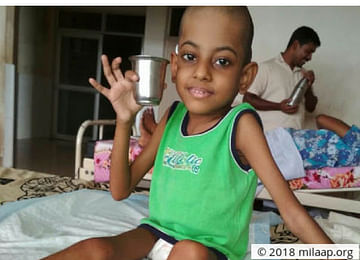 Help Akshay to Continue his Tretament

He has no sensation below his hips and has a condition that has caused excess fluid in his brain.

UPI: givetomlpakshay2@yesbankltd (Copy to clipboard)
Or
Click here to read the instructions before you make a bank transfer.