Gift This 3-year-old The Ability To Hear And Speak Before He Loses The Chance Forever | Milaap
loans added to your basket
Total : 0
Pay Now

SM
You are sending a message to
Shamshuddin Manipal
Go back

Shares
Shares
Share on whatsapp
Now that Akshat has started going to school, things have become worse for him. He tries to make friends, but his speechlessness hinders it. When his friends try talking to him, he just blankly stares at them. I think with his helpless stares, he tries to ask us why he can’t he do what is normal to others.


My name is Vivek and Akshat is my only child. Since his birth, he neither tried to speak nor respond to us. We thought it was delayed development. Only when my little baby turned 1, we realized that it was not normal. One instance only strengthened our fear. It was someone’s birthday in our family. A large balloon had burst near him, and we were shocked to see him not react at all. Manju and I knew this meant something terrible. Even we jump when balloons burst!

As we started observing closely, we could see that he neither tries to speak or respond when we call him. When we went to the doctor, we discovered that Akshat can neither hear nor speak.

Initially, we were worried about communicating with him, but we realized Akshat’s struggle was something more grave. We gave him a hearing aid he has been undergoing speech therapy for past 1 year. A doctor told us he can hear, and he can grow up to be just like everyone if he gets a cochlear implant. If it does not happen within a few months, then he will be completely deaf forever.

After rigorous therapy, when he first uttered the word ‘mummy’ and ‘papa’, our happiness knew no bounds. Now he can speak very few words. He tries to communicate through sign language. Doctors had told us to refrain from sign languages or he’ll never be close to normalcy. He becomes so irritated when we pretend to ignore his sign languages that he starts crying. My heart burns to see his helplessness. But I know we have to be strong enough to give him a normal life.

In spite of all his sufferings, he doesn’t cry apart from the time that he’s irritated. Motu Patlu and Krishna are his favorite cartoons. I think the cartoons are an escape from the reality for him. He doesn’t have to put any effort into it. He can just sit, watch, enjoy and laugh.

I am a private car driver and now I spend more hours outside the home so that I can get earn a little more. We have already spent Rs 2 lakhs, a lakh on his hearing aids alone and another lakh for his speech therapy so far. I earn only Rs 5,000 a month. I have spent more than twice my annual income in just a year. Even carrying out the therapy is becoming so difficult. But I can't give up on my child.

Akshat is now 3. He has a shot of hearing this world for the first time and growing up a normal child if he gets a cochlear implant soon. Even a month's delay means that he will develop further and this condition will be permanent. The parents are doing everything to give their baby a normal life. But the cost needed to give him a normal life is Rs 8 lakhs, which the driver father can’t afford.

Your support can help this child speak and hear. 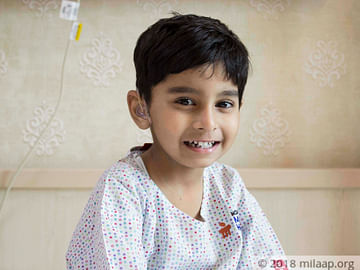 Akshat is a happy child who cannot even ask for food or hear his parents call his name.

UPI: rzpy.givetomlpakshatku001@hdfcbank (Copy to clipboard)
Or
Click here to read the instructions before you make a bank transfer.